When I first started out in the newsletter business, my goal was to generate thick streams of income for myself and my subscribers.

My winning track record is why PBRG guru Teeka Tiwari asked me to join his exclusive trading service. And I’ve learned a lot under his wing. Since we joined forces in 2018, we’ve averaged 32.6% annualized gains for our subscribers.

But I’ve learned a lot working with Big T. And one of the biggest lessons he taught me is how to take the safe, boring income we make from our trading strategies… and turn it into potentially life-changing gains.

The best way to do that is to find huge, undeniable trends… take small positions in the best companies in those trends… and let the massive profits accumulate.

We saw Big T do this with cryptocurrencies.

In 2016, he saw the undeniable potential of bitcoin… Recommended it as a best-in-class asset in the space… And the rest is history. If you bought bitcoin when he first told you about its explosive potential, you’d be up 8,782%.

I saw a similar setup last year in the gold market. I knew gold was in upward trend, recommended best-in-breed mining companies, and made gains like 350% on Kinross and 133% on Yamana Gold.

Today, two massive trends are converging… And they will create the biggest stock market opportunity in 2021.

Squarely On Our Radar and Heating Back Up

Now, you may smirk at me when I tell you about the first trend. In fact, you’ll probably say, “Hey, William. That trend is played out.”

But I can tell you nothing could be further from the truth. The trend I’m talking about is legal cannabis.

Big T and I have been following the industry since mid-2019. And to be candid, for most of that time, it’s taken a beating.

For instance, the benchmark ETF that tracks the industry, the Horizon Marijuana Life Sciences Index (HMLSF), is down nearly 37% since its peak in March of 2019.

But the tide has turned since the November 2020 general elections…

Legalization in one form or another was on the ballot of five states: South Dakota, Mississippi, Montana, Arizona, and New Jersey. And voters in each state approved the ballot measures – a clean sweep.

This didn’t come as a surprise to us. After all, the rate of approval of legalization among Americans has been on the rise in past years: 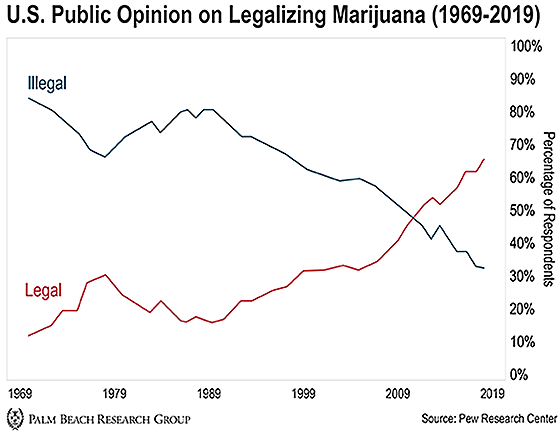 With two-thirds of Americans now in favor, legal cannabis is no longer a boogeyman. And scientists and medical professionals all over the world are exploring the medicinal benefits of the cannabis plant and its offshoots.

This U-turn led to an unexpected benefit for the space when COVID-19 struck… While many businesses shuttered their doors, legal cannabis was deemed essential in most states where it’s legal. This meant these businesses could stay open – and even add features like home delivery and curbside pickup.

This was a marked turn from the persecution the industry faced up until recently. And it acted like rocket fuel to an already rapidly growing industry. Now, around 70% of the U.S. population lives in a state that has either medical or recreational cannabis.

As we look to the horizon, we see plenty of positive catalysts ahead for legal cannabis:

Any one of these catalysts would be enough to get our attention. Combined, they make us very excited about what’s ahead.

Once they start rolling out in full force, we expect the industry to continue moving higher…

We’re already seeing this positive momentum at work. As you can see below, HMLSF is up an eye-popping 72% over the last three months: 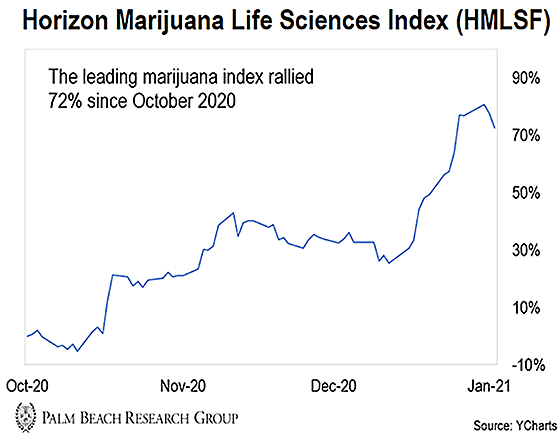 To take advantage of the industry’s resurgence, we’re looking at targeted opportunities in the space. That’s where the second massive trend comes in…

Everyone knows the IPO market is on fire… An IPO is an initial public offering. That’s when a company lists shares on a public market like the New York Stock Exchange.

And last January, Big T and I predicted we’d see a megawave of IPOs in 2020 – including high quality legal cannabis companies. We also said this IPO megawave would be even bigger than the number of companies that went public during the 1990s dot-com boom.

And according to the latest data, we saw a record 552 new IPOs last year – just as we had predicted. But that was just the beginning. We believe 2021 will be even bigger.

As you can see, the IPO boom is another undeniable trend. And it’s combined with the legal cannabis boom to create some life-changing opportunities.

For example, Big T and I recommended a private cannabis company in June of 2019.

The company went public last December… and on IPO day returned 50% overnight. After taking a breather, shares in this company are still up 154% from where our readers got in pre-IPO. And we project it could return as much as 500% upside in the coming months.

If you want to play the legal cannabis trend, consider buying HMLSF. We’ll see the index continue to rise as the market for cannabis expands.

But if you really want to make life-changing gains from the combination of these two trends, see my P.S. below.

The Hype Hole path could cause you to put your financial dreams on hold for decades. But the Blueprint path can help you potentially achieve them this year.

Last week, Big T held his first big event of the year to explain the difference between the two… and to show you how to choose the Blueprint path.

Plus, he revealed his first-ever Blueprint pre-IPO tech deal (and tech is another huge trend)… as well as two legal cannabis companies that plan to go public this year.

You can grab shares in the pre-IPO tech deal for 50 cents… and get in on the ground floor of one of the cannabis companies for $1 per share.