While the world changes around us, human nature remains the same.

In the week after the 9/11 terrorist attacks, investors sold $1.4 trillion worth of stocks. A lot of consumers stopped flying. Airline traffic dropped by over 30%. People just stopped spending like before. And cash savings hit record levels.

That’s human nature. In times of uncertainty, we hunker down and prepare for the worst.

One of the ways this preparation manifests itself is through savings. In other words, cash on the sidelines.

Time and time again we have seen cash build up during uncertain times. In fact, we’re living in one of those times again.

The question is, where is it going? And can we profit? I’ll tell you below.

Nearly $5 Trillion on the Sidelines

In the first quarter of 2020, COVID-19 took the world by storm. The first global pandemic in over 100 years, it affected every corner of the planet.

Naturally, this created elevated levels of fear and uncertainty like we saw during the Great Recession.

And once again, cash on the sidelines is at record levels… something clearly visible by looking at money market funds.

A money market fund is a mutual fund that invests solely in cash and cash equivalents, such as short-term Treasury bills.

So it’s no surprise money market funds rise during times of fear and uncertainty. And that’s exactly what we’re seeing today.

Check out the chart below, which shows total financial assets in money market funds. 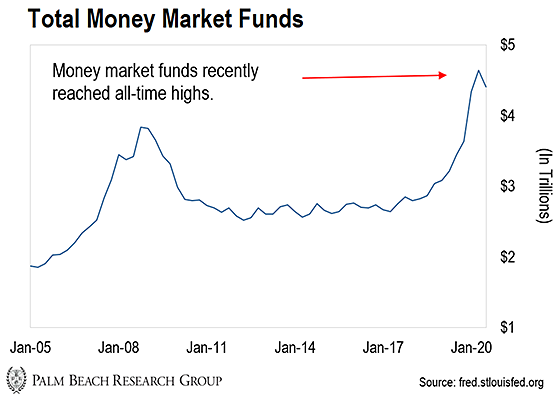 As you can see above, cash on the sidelines is at record levels since the outbreak of the pandemic last year.

But as we mentioned above, where is it going? And can we profit?

Time and time again we see that once the fear and uncertainty pass, the money gets put to work.

That’s important for investors. Those that sold out of fear will be buying again.

We saw it manifest after the Great Recession passed. Investors piled back into assets such as gold, real estate, and stocks.

We think this will play out similarly this time around. Money moved to the sidelines will funnel back into assets.

But this time around there’s one key difference: cryptocurrencies.

Bitcoin recently took out its all-time high from 2017. That invalidated any theses that bitcoin was just a bubble or fad.

And major players continue to legitimize the industry. In just the past few weeks:

It’s pretty clear cryptocurrencies are on the way to rapid adoption and usage.

On top of that, bitcoin has a great track record compared to other popular assets. Just take a look at the table below. 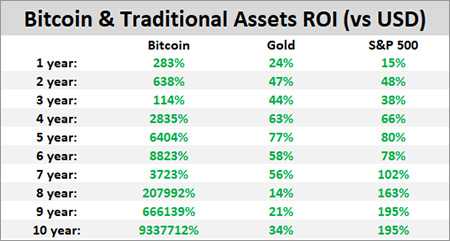 Bottom line, investors looking to put money to work will have a hard time ignoring bitcoin and cryptocurrencies.

Juicing Your Returns with Crypto Income

Obviously, one way to play this is to just buy bitcoin.

But you can do even better from what we call Tech Royalties. These royalties are ways you can generate income from your cryptos, even bitcoin.

What’s great about Tech Royalties is you get capital appreciation along with monster 10%-plus yields. So as bitcoin and other crypto explode in price, the income you generate will rise, too.

I expect big moves in the Tech Royalty space over the next year or so as investors take money off the sidelines and put it into crypto.

If you want to learn more about this trend – including our favorite tech royalty – click here.

As I mentioned above, this new asset class is unlike any other in history. That’s why Daily editor Teeka Tiwari put together a presentation to show you how to start earning income from Tech Royalties. You can watch it right here…

As a bonus, you’ll get the name and ticker symbol of our No. 1 Tech Royalty.