It’s one of my favorite films of all time. And it’s full of lessons…

For instance, in one scene, the titular character takes a group of guests to a part of his factory. It’s filled with his newest concoction, the “Fizzy Lifting Drink.”

Wonka tells the group he won’t sell the beverages yet, because they’re too dangerous. The fizziness already caused one Oompa Loompa to rise and fly away.

So he warns them not to drink it.

But Grandpa Joe and Charlie Bucket don’t listen. When the others leave the room, the pair stays behind to take a swig. A few seconds later, they’re floating in the air, giddy with joy.

However, they soon realize there’s a giant fan on the ceiling – and they’re headed right for its blades. They’re terrified…

But fortunately, they manage to escape. They start burping, providing a vent for the added air. By doing so, they gently descend back to the factory floor to safety.

One of the morals of the story is: Don’t disobey authority. It’s a theme throughout the film… Every time a kid disobeys Wonka, something bad happens to them.

And you can apply the same message to the markets.

Meanwhile, my data (the “authority” in this example) is warning them to be patient. It’s saying a pullback is coming. And if you’re not careful, it can rip your face off…

When it comes to the markets, the authority I trust and go by is the data. If you don’t listen to it, bad things usually happen to your investments.

Basically, my “unbeatable” stock-picking system is like Willy Wonka. And investors are the guests at his factory.

Now, remember, my system scans nearly 5,500 stocks each day. It uses algorithms to rank each one for strength.

And to make sure it’s highly accurate, comprehensive, and effective, I used my experience from nearly two decades at prestigious Wall Street firms – regularly trading more than $1 billion worth of stock for major clients.

But my system does more than just look at individual stocks. It also looks at the big-money buying and selling in the broad market. 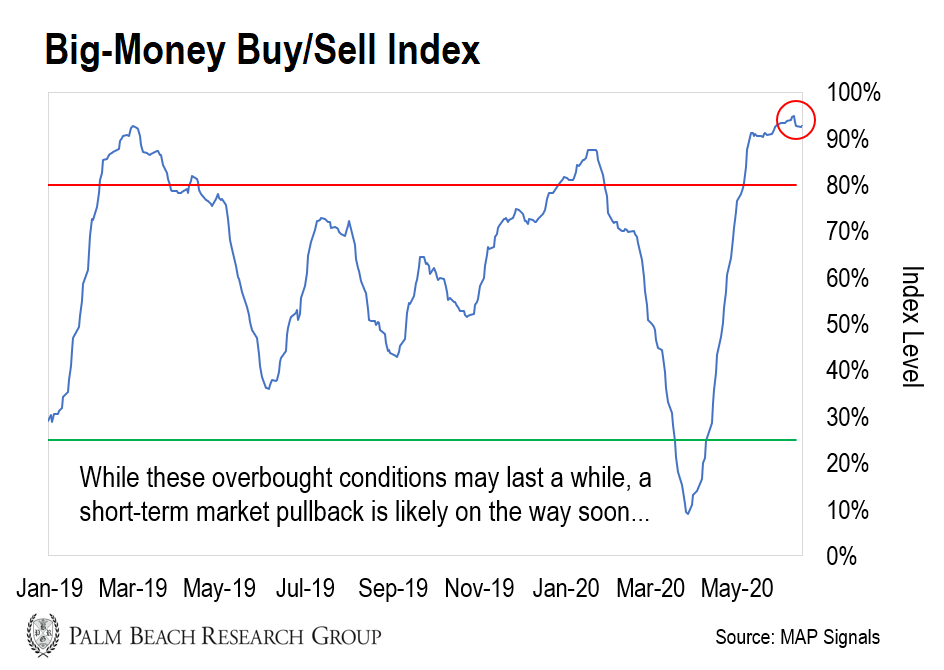 When the Big-Money Index (BMI) dips to 25% (see the green line above) or lower, sellers have taken the reins, leading the markets into oversold territory. And when the index hits 80% (the red line) or more, it means buyers are in control and markets are overbought.

So while we’re still in very overbought conditions, you can see the BMI is starting to decline. And this signals that the market has more downside ahead in the near term.

Digging deeper, our data shows the current overbought conditions have lasted six weeks so far. The longest we’ve observed similar conditions in the past is 13 weeks.

Now, the buying could temporarily ramp up again with how volatile the market is right now. But when my system indicates buying is drying up – like it is now – the stage is set for sellers to easily push stocks back down.

So this is a poor time for investors to buy…

On March 11, my system issued a similar warning.

Yet the next day, the market rallied hard. The Dow recovered 1,167 points and the S&P 500 was up nearly 5%. Most stocks were in the green.

Here’s what I warned then:

As stocks rise again like this, the big money will have protective trailing stops for their investments. And if stocks drop again on another leg down, the computer selling will take over.

These stops will be triggered – and cause even more selling. Any gains made on this rip up will quickly be erased. So we’ll see a cascade effect until all the sellers are washed out and no one is left to sell. Once we’ve hit that bottom, it’ll be safe to get back into stocks.

The same warning applies today. Don’t let FOMO make you giddy with excitement. In this environment, buying is dangerous. You can get your face ripped off.

Instead, let’s be patient and wait for the inevitable pullback. If you heeded my March 11 warning and stayed on the sidelines until the market bottom on March 23… you would’ve seen the market rally as much as 45% in about two months.

So stay patient. If this rally still has some steam left in it, we’ll just let our winners continue to rise.

And when it pulls back, we’ll take some profits and be ready to buy the bottom again. Then, we’ll ride the next wave for even more gains.

P.S. My system is already targeting some potentially mouth-watering deals coming along – specifically in the discretionary, technology, and healthcare sectors.

We’re just waiting for my system’s green light to start shopping again. As you know, timing is everything.

And to find out which stocks my system is flagging for our shopping list, just check out all the details right here.