Gold is up 11% over the last two months.

As the chart below shows, the gold price moved higher quickly. And it just broke out of a key level it hasn’t hit since 2013… 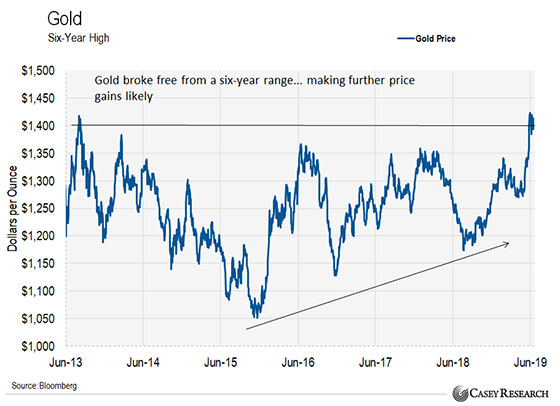 In the latest issue of my Strategic Investor newsletter, we said we expected a huge rally. We pointed out that we couldn’t find one fund manager positive on gold.

Now, we can’t find one who thinks the $141 run in the gold price is real. That tells us there’s more to come.

You see, at the beginning of a new bull market, even the most loyal industry veterans don’t trust higher prices. At the end of a bull market, every fool tells you there’s more to come.

There’s more to this new bull market in gold than lines on a chart. The three largest central banks in the developed world declared they’ll do anything to stimulate their economies. That’s central bank lingo for “creating more money.”

The Fed promised to “normalize” its involvement in the U.S. economy. After reducing its bloated balance sheet by a mere 15%, it cried uncle, promising to reverse course.

Gold sniffed that in advance of the announcement. As plans for the Fed’s next monetary ruse formalize, we expect gold to know first.

We think $1,500 per ounce this year is a lock. In an interview with the popular gold industry news network Kitco News, I made this prediction last December… again in March… and recently in May. Each time, the $1,500 call seemed crazy. But after moving up $104 per ounce in June alone, my prediction doesn’t seem so crazy.

A decisive move over $1,500 will wake up asset managers who haven’t looked at gold in years. They’ll buy exchange-traded funds and mutual funds.

But those asset managers don’t realize funds own a declining number of mining stocks. You see, the mining industry is in the middle of a consolidation wave. (This is a rising trend. And my colleague Teeka Tiwari came up with a unique way to profit from it. You can sign up to learn more right here.)

Everything looks to be in place for the mother of all gold rallies. If you don’t own any gold, start with buying physical ounces.

The Power of Leverage

If you aren’t familiar with the concept of leverage in gold stocks, here’s a quick example of how powerful it can be…

This is why a small increase in the price of gold can cause a gold stock to soar many times that amount.

First up, the king of all gold bull markets: 1979–1980. Gold more than doubled during this period. But gold stocks more than tripled:

Meanwhile, gold only rose 8% during that time.

So as you can see, even a small increase in the price of gold can lead to huge returns.

On top of that, central banks like the Federal Reserve have more power over the economy than ever before. That means this rally could be bigger than any of the past ones we mentioned earlier.

Remember, before owning a gold stock, it’s wise to have some physical gold. If you’re new to gold, start with common 1-ounce coins like the ones offered here by Gainesville Coins. (We do not receive any compensation from Gainesville Coins for bringing you this offer.)

Then, you can speculate on higher gold prices by buying gold miners, which gives you the chance to multiply your money in a gold bull market.

P.S. As I mentioned earlier, my colleague Teeka Tiwari has a unique way to profit in the gold market… In fact, he says you could make $1 million (or more) over the next 12 months.

As a gold expert myself, I’d be remiss not to tell you to sign up for his special event today at 1 p.m. ET. In fact, I’ll be making a special appearance, too…

This is a time-sensitive opportunity, and Teeka is only making his briefing available publicly until midnight tonight. So don’t delay, click here to automatically sign up for this critical briefing.