Imagine paying no capital gains taxes—zero taxes on the biggest gains of your life. It’s possible… and you don’t have to be a billionaire or even a millionaire to do it.

Earlier this month, a close friend invited me to a small, one-day conference in Newark, New Jersey. What I learned could be the single most important piece of investment knowledge you’ll hear about during the Trump presidency.

If you scan news headlines for weeks, you won’t hear one mention of this from the mainstream media. In the constant drumbeat of hysteria and bogus investigations, a trillion-dollar tax incentive for investors of all sizes doesn’t get any airtime.

The small conference I attended was all about taking advantage of this tax incentive. It has to do with “opportunity zones.” They’re a part of the Tax Cuts and Jobs Act of 2017. 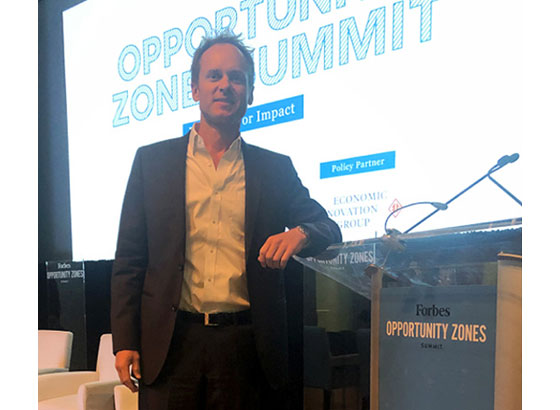 At the Forbes Opportunity Zones Summit in Newark, New Jersey

The government has a specific definition of an opportunity zone. Among other things, at least 20% of the residents need to be below the poverty line. Unemployment needs to be greater than 14%. Generally, these are areas passed over by big investors.

However, opportunity zones are not war zones. There are over 8,700 of them. That’s about one in eight census tracts in the country. This map put together by the Economic Innovation Group has a search feature so you can see if there’s one in your town. 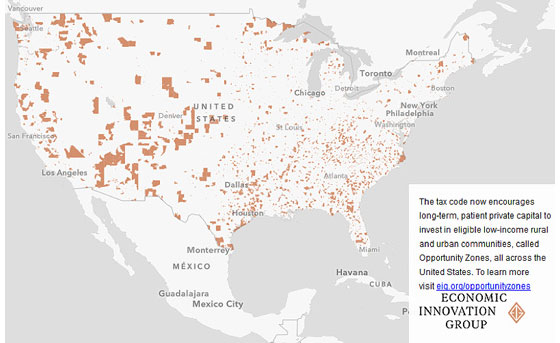 Roughly one in eight census tracts is an opportunity zone

Buried deep in the 2017 tax bill is an incentive like none I’ve seen come out of Washington in my career. When people look back on this law years from now, they’ll think two things.

First, this is a big private-sector incentive to solve an even bigger public-sector problem. With what I know now, I think it will work. The history books will call it the most productive tax incentive ever.

Second, it’s the only chance I know of to pay zero capital gains taxes on profits while controlling where that money goes next. Most tax incentives mean handing over your hard-earned fortune to a glad-handing philanthropist. In this case, you maintain control. You also keep future profits.

These two links will answer some of the more detailed questions about how opportunity-zone investments work:

Anyway, back to the conference. Steve Forbes opened for it and he said there’s over $6 trillion in unrealized capital gains in the U.S. 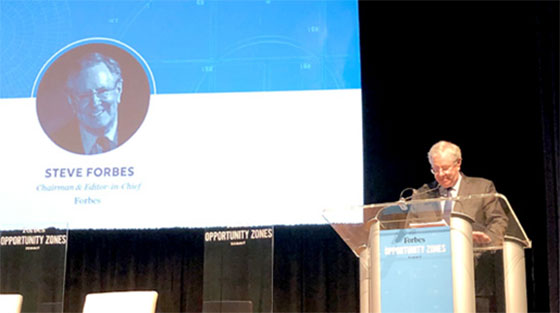 Forbes says there’s over $6 trillion in unrealized capital gains in the U.S.

Using this incentive, you could sell that stock and pay no capital gains taxes if you reinvest the proceeds into a qualifying investment located in one of the over 8,700 opportunity zones. That investment can be a business, real estate, or an equity investment. As long as it meets the criteria laid out by the IRS, you won’t pay any capital gains taxes.

The idea behind the incentive is to funnel investment dollars into areas previously passed over by big money investors. The opportunity zones in my town are right next to mega-developments. I looked at a property recently that qualifies. I’m working on an offer right now, as I think this area will see a surge of investment in the coming years.

There’s also a requirement that you hold the opportunity-zone investment for at least 10 years. The idea there is to avoid hot money moving in then out just to save on taxes, so these areas have a chance to see real, long-term capital investment.

It’s important to talk to an up-to-date CPA before making these moves. My CPA knew all about it when I brought it up. The requirements are important to follow, but not as difficult as you’d imagine.

New Jersey Senator Cory Booker also spoke at the conference. He was the mayor of Newark when it was a dump. He calls opportunity zones “domestic emerging markets.”

Booker used private-sector incentives to lure developers and investors to Newark. It worked. By the end of his term, Newark accounted for one-third of all the building permits in New Jersey while housing only 6% of the population.

Regardless of his politics, Booker got this issue right. He was a big supporter of the opportunity-zone legislation. He spoke about Newark’s success and his hope the entire country would experience the same. I found this pretty right-minded for a guy who’s generally on the far left.

It’s a reminder that opportunity zones are about real tax incentives, not politics.

In addition to Forbes and Booker, I also heard from basketball legend David Robinson, Los Angeles Mayor Eric Garcetti and former Facebook President Sean Parker. The consensus among all these speakers was: We’re not even in the first inning of opportunity-zone investing.

You’ll hear more about opportunity zones in the coming years. If it’s something you think would work for you, now’s the time to take action.

There’s no limit to the number of investors who can form opportunity-zone investment funds to take advantage of this once-in-a-lifetime tax incentive.

While savvy investors have heard about these zones, few have filed the forms needed to make investments.

When we look back on this time, we’ll see this tax incentive helped quick-thinking investors defer taxes for decades. We’ll see it allowed those fortunes to grow while others faced taxes.

If you’re sitting on big investment gains, you might want to look into this now.

P.S. I’ve just released a brand-new video explaining this opportunity in more detail. This is one of the single greatest tax incentives in U.S. history. And it’s critical for anyone wanting to take advantage of this new tax law to look into it now.

If you’re interested, you can go here to start watching.