Even though it’s been around for years, most people probably haven’t heard of modern monetary theory.

It’s mainly debated by economic geeks and academics. I’ve even been a part of some of those discussions myself. But now, the theory is becoming vogue.

At 29, Ocasio-Cortez is the youngest woman ever elected to Congress. And the self-described democratic socialist is a rising star in the Democratic Party.

But she’s also pushing policies that could harm the U.S. economy…

In a recent interview, Ocasio-Cortez said that MMT needed to be “a larger part of our conversation.” In other words, she wants to see the U.S. put this theory into practice.

At the Daily, we don’t usually get into politics… But when policies or personalities have an effect on the markets (our usual beat), we take notice.

From what I can tell, she’s probably a fun person to hang out with… and I’m sure she’d fit in well with my group of friends. So we’re not trying to pile on her.

But I do want to bring attention to her pet project—because it could be the most dangerous economic theory you’ve never heard of.

If the U.S. indeed goes down this path (and it could, since MMT has many supporters among millennials), you’ll need to prepare now to protect your wealth.

MMT has been around since the early 1990s and has roots in Keynesian economic theory.

Keynesian theory is the namesake of famed British economist John Maynard Keynes. During the 1930s, he advocated increased government spending to pull the U.S. and other Western economies out of the Great Depression.

Similarly, MMT adherents advocate increased government spending, too. In a nutshell, they argue that since governments can print unlimited amounts of money, they can always cover their debts. So in theory, governments can’t default.

But it doesn’t end there…

Advocates also want to “spend money into existence.” That means they believe the government can grow the economy through deficit spending. After all, a government that prints its own money can always print more to cover its debts.

So it’s easy to see why this theory would be attractive to Ocasio-Cortez and her fellow progressives: It’s free money.

They can pay for all their pet projects like universal basic income, free healthcare, free college tuition, and green energy without worrying about the bill—whether it’s $21 million or $21 trillion.

In principle, I don’t have anything against these noble causes. I’d love to see everyone wealthy, healthy, and educated.

But I’m a realist… Government handouts aren’t the way to achieve these goals—no matter how magnanimous they are. And they definitely won’t help the economy grow.

If printing money was the path to prosperity, then the Soviet Union would’ve been the world’s richest country. And Venezuela and Zimbabwe would be among the richest today. Yet, the USSR is defunct and the other two are economic basket cases.

Here’s the bottom line: Unrestrained money-printing that goes toward economically unproductive causes will cause inflation. That’s why Venezuela and Zimbabwe are failed states.

But since when has real-world economics ever stopped politicians from trying out some crackpot theory?

As longtime PBRG friend and my mentor Bill Bonner says: “Crazy plans that hurt the economy have a way of becoming the law of the land—especially when the laws of the land are already crazy and absurd.”

Socialism By Another Name

Like I said, there’s nothing wrong with wanting to help people be healthier, wealthier, and smarter. In fact, that’s our goal here at the Daily.

But providing free healthcare, guaranteed income, and free tuition isn’t the way to do it. The Soviets learned this lesson the hard way.

The best way to achieve health and wealth is through free markets. But the problem is that the younger generation is increasingly gravitating toward MMT instead.

A recent University of Chicago survey found that 45% of millennials have a positive view of socialism. Among minorities (the fastest-growing demographic group in America), the number is even higher.

When you break it down by party lines, 61% of millennials who identify as Democrats view socialism positively. Astoundingly, 25% of Republican millennials do, too.

Meanwhile, Ocasio-Cortez is taking the theory mainstream… Here’s a recent retweet the congresswoman sent to her 2.7 million Twitter followers:

The writing is on the wall…

So what should supporters of free market ideals do?

The answer is simple: Prepare yourselves.

When the time comes, you’ll want to own physical assets like real estate and commodities. These assets will be in demand no matter what Washington does.

But the best hedge against the blowback from goofy economic theories is gold.

Even if the government doesn’t go full-blown socialist under the guise of MMT, I don’t expect it to stop its free-spending ways anytime soon. That’s why you should allocate at least 5–10% of your portfolio to gold.

The move toward MMT won’t happen overnight. In fact, it may take years. But it’s gaining traction. And once it’s full steam ahead, you’ll want to own some gold… Because even in loony times, it will maintain its value.

P.S. With MMT becoming mainstream, do you think it will be the path to prosperity for the U.S. economy? Or will it lead us in the way of Venezuela and Zimbabwe? Send us your thoughts right here…

At the end of last year, President Trump signed a key piece of legislation that will kickstart a tiny market with huge potential.

And smart investors who stake an early claim in this little-known market could make a small fortune from just a handful of companies. To find out more, click here… 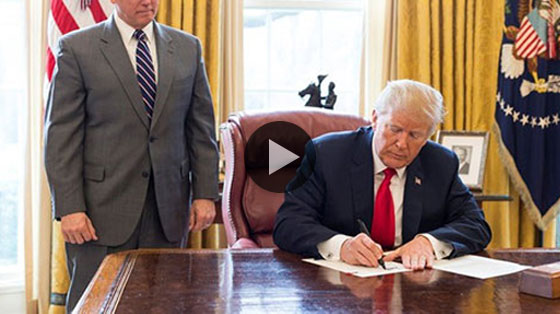