We don’t know if it’s wizardry or chicanery… or even if it’s done on purpose.

But one thing’s clear… President Trump seems to base his trade policies on what’s happening in the stock market. 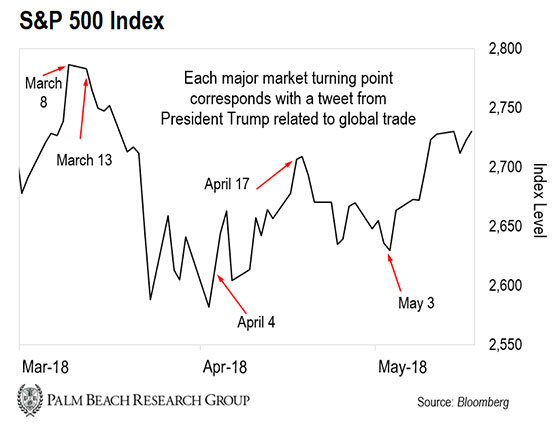 Each major turning point corresponds to a presidential tweet about trade.

Since March, the president has been tweeting up a storm about trade relations—and the market seems to have been reacting.

March 8: Trump announces tariffs on steel and aluminum on Twitter. The market falls a couple of points.

May 2: Trump announces that U.S. officials have arrived in Beijing for trade talks and signals that relations will improve. The market rises 4%.

Of course, we can’t say for sure whether the president’s policies are based on market movements… It could just be coincidence. But it sure doesn’t feel that way.

We do see a trend developing here, though… And our job at the Daily is to follow trends to profits.

We’ve used this strategy to successfully bet on President Trump’s tax cuts in January 2018, steel and coal in June 2017, biotech in March 2017, and financials in February 2017.

And just last month, we followed his missives against the Saudi royal family into the energy sector.

The president’s recent flurry of tweets on global trade is presenting us with another opportunity. Let me explain…

President Trump is a smart businessman. He knows investors like free trade. But he thinks the trade deals we’ve made with countries like China are bad for the U.S. They export to the U.S. with few restrictions, but put heavy tariffs on our U.S. exports.

We can’t know for sure what our mercurial commander-in-chief will tweet next about trade.

Over the weekend, Treasury Secretary Steven Mnuchin announced that the U.S. would put its trade war with China “on hold” after both sides agreed to drop their tariff threats. The market has rallied some since.

I’m a little skeptical that they will maintain this posture… But if you see President Trump send another get-tough-on-trade tweet, expect the market to fall again.

How to Play Trump’s Trade Tweets

After stocks have run up a little bit when Trump “gets tough” on trade, you could take a short position. Once his rhetoric eases, go long.

This strategy would have worked well over the past few months.

For those of you who don’t want to spend time trading in and out of your brokerage account, I still suggest buying the iShares Russell 2000 ETF (IWM). It’s up 18% since I first recommended it in March 2017.

Remember, multinational companies will feel the most pain if a trade war breaks out between China and the United States. Smaller, domestic companies will be less exposed.

The Russell 2000 does take its lumps along with the S&P. But it just reached an all-time high last week. 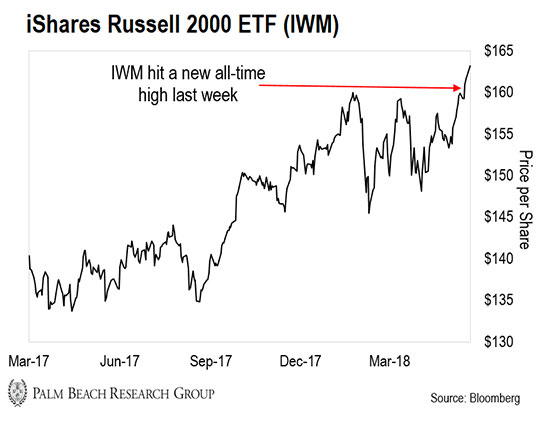 P.S. Do you regularly follow President Trump’s tweets? We want to know why (or why not), especially if you’ve profited from them. Send us your story right here…

Learn how to profit from this scientific revolution… 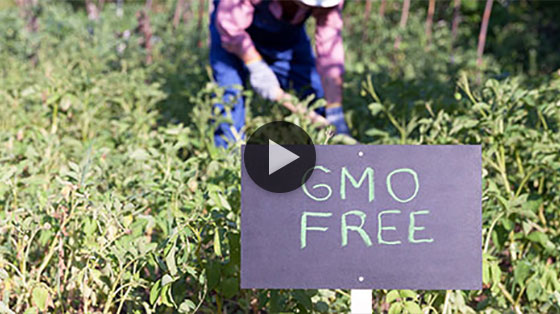