Nick’s Note: Helping you achieve a dignified retirement is one of our main goals at the Daily. That’s why today’s essay—from my colleague Greg Wilson—is so important.

Greg says that American retirees are much more likely to hold a certain toxic asset than other investors. And it’s a ticking time bomb in their portfolios. Read on for more…

Greg Lippmann says that the next financial tremors will come from corporate debt.

A former Deutsche Bank AG trader, Lippmann was instrumental in designing the trade against subprime mortgages that became known as the Big Short.

(You might recognize Burry’s name from the movie The Big Short. Actor Christian Bale portrayed Burry in the film. And Ryan Gosling portrayed fictional character Jared Vennett, who’s based on Greg Lippmann.)

From 2008–2009, Burry used Lippmann’s design to bet over $1 billion on the collapse of the subprime loan industry. And when the market crashed during the Great Recession, he made over $2.5 billion.

This time around, Lippmann has targeted another sector he thinks is headed for crisis: corporate debt. He notes that corporations are more leveraged than they were prior to the Great Recession—meaning, they’re holding more debt.

And as I’ll show you in a moment, with interest rates going up, that’s bad news for corporate bonds.

Longtime Daily readers shouldn’t be surprised. We’ve been sounding the alarm on bonds for months.

We call it Income Extermination. I’ll explain what that means below.

This “Safe” Investment Is at Risk

You see, most people think bonds are 100% safe.

But bond prices move inversely to yields. So when yields start going up, bond prices go down.

Retirees are in the greatest danger. According to the U.S. Census Bureau, those age 65 and older own the highest percentage of U.S. government and corporate debt.

Most of the headlines today focus on government debt and how the U.S. 10-year Treasury yield recently climbed above 3%.

Although it’s not getting a lot of press, corporate yields are on the rise, too.

As you can see, they move inversely to each other. 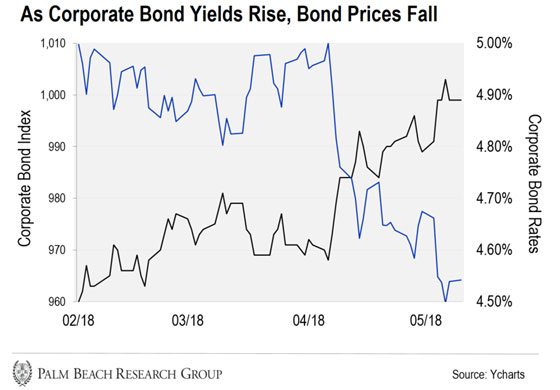 That implies $270 billion in losses for corporate bond investors. And it’s a trend likely to continue.

According to Wells Fargo Securities, corporations will need to refinance an estimated $4 trillion worth of bonds over the next five years.

That’s about two-thirds of all their outstanding debt.

This time around, however, rates are on the rise. That means it will cost more to borrow, and the effects could accelerate the bond rout. There are two reasons for this:

Corporate bond purchasers will want higher compensation for the increased risk. And that will lead to even higher rates in the future.

So here’s the question you need to ask: With bonds looking increasingly risky, where should investors turn?

How to Avoid Income Extermination

Over the last three years in The Palm Beach Letter, we’ve quietly sidestepped the ticking time bomb of Income Extermination.

Instead of buying bonds, we’ve been scooping up fundamentally sound, cheap stocks with large yields.

And we’ve been doing that with closed-end funds (CEFs).

CEFs are an investment structure with shares traded on the open market.

They’re similar to exchange-traded funds (ETFs). But there’s one main difference: CEFs do not issue shares daily. That means CEFs can trade on the market at prices different than the value of their assets, called the net asset value (NAV).

When a CEF trades for less than its NAV, you can buy it at a discount. This means you could buy $1 worth of assets for just 90 cents.

If you’re not a subscriber, you can check out this article in which I show you how to pick a good closed-end fund.

P.S. Since PBL editor Teeka Tiwari started adding CEFs to our portfolio in 2016, we’ve averaged realized gains of 18.4%, which beats the S&P 500 during that period. Our average yields are more than 300% greater than the S&P 500’s.

Now, Teeka tells me that for a limited time, he’s giving a copy of his report, “How to Survive and Prosper in the Coming Income Crisis,” to new subscribers for free. This report includes 277 red-flag investments to avoid… plus two CEFs that pay nearly twice as much as what you’d get from a 10-year Treasury. (And much more.)

Click here to learn how to get your free copy today…

Today, we have a special message from PBRG’s very own Teeka Tiwari…

At a closed-door conference in Miami Beach, I got to know a man I call the Billionaire Broker. His background and his system impressed me.

His full identity will be made public on June 14, but I want to make sure you know about this impressive trader before then.

I endorse him and I endorse his system. But I don’t give my endorsement lightly.

I have to be thoroughly convinced that someone is credible and highly successful before I’d even think about endorsing them.

You can learn more about this master trader by clicking here… 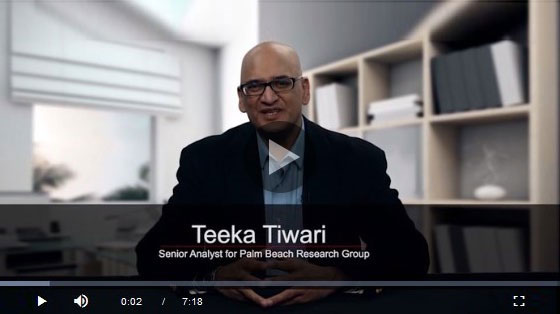