The inevitable happened… China retaliated against the United States in the countries’ heated trade dispute.

On Wednesday, Beijing slapped $23 billion worth of tariffs on U.S. products, including soybeans, small passenger planes, and beef.

That comes three days after China placed 25% tariffs on 128 other U.S. products, like pork, wine, nuts, and seamless steel pipes.

The tariffs follow President Trump’s recent proposal to impose protective duties on up to $50 billion worth of Chinese imports.

China’s move is a shot across the bow. According to estimates, the tariffs will impact about $26 billion worth of goods.

That’s not much… But it’s sending a message.

For instance, California pistachio and almond growers exported over $1 billion in nuts to China in 2016. That could be in jeopardy now. And Wisconsin ginseng farmers could lose up to $30 million in sales to China.

Here’s the thing… This tit-for-tat could explode into a full-blown trade war.

Regular readers know that we don’t like tariffs… The market doesn’t, either. It plummeted over 2% on Monday after China announced its first threat.

This could get ugly really quickly… So now’s the time to start preparing your portfolio. If this trade war escalates, you’ll need to find a safer place for your investments.

In today’s essay, I’ll tell you one of my favorites. But first…

Tariffs Are Bad for the Global (and U.S.) Economy

Global trade works because it allows countries to make win-win deals with each other.

And U.S. factory workers are among the biggest losers right now. That’s just how the global economy works.

We understand… Many Americans want to protect domestic jobs. But that comes at a cost: higher prices and even more job losses.

Companies will add the costs of any tariffs to the prices of their products, so it’s like a hidden tax. Plus, tariffs can be job killers.

For instance, when President Bush imposed tariffs on imported steel in 2002, the steel industry gained 3,500 jobs. But industries that used steel lost about 200,000 jobs.

And according to one study, when President Obama placed tariffs on Chinese tires in 2009, it saved 1,200 jobs. But China responded with tariffs against U.S. retailers, costing 3,000 jobs. So, it was a net loss.

As you can see, tariffs cause more harm than good…

That’s why the Dow Jones Industrial Average and the S&P 500 indexes are down 12% and 10%, respectively.

Despite the market plunge, Trump isn’t folding. In fact, he’s upping the stakes. And China’s not backing down, either. That’s why you need to act now…

Even before Beijing announced its retaliatory moves, President Trump asked his team for ways to penalize China even more.

The Trump administration is considering billions more in tariffs on Chinese high-tech sectors like semiconductors (chip makers), communications, and aerospace.

That would push prices for electronics a lot higher… and the broad market a lot lower.

Today, the S&P 500 looks shaky. That’s because it’s mostly made up of large, multinational companies. They will feel the brunt of any trade war.

Small, domestic companies are less exposed to tariffs. So, they should fare better if things heat up.

You can see that in the chart below. It compares the iShares Russell 2000 ETF (IWM) to the SPDR Dow Jones Industrial Average ETF (DIA) and the SPDR S&P 500 ETF (SPY). 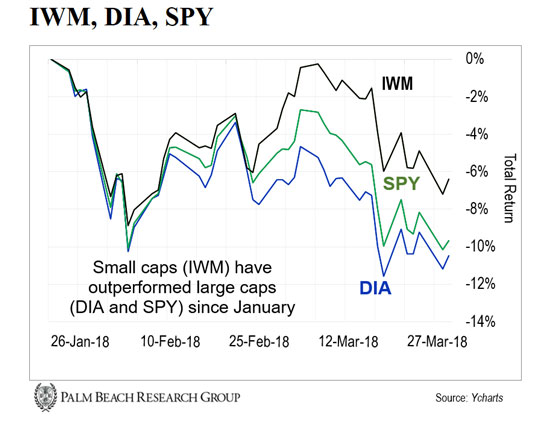 The Russell 2000—which tracks small U.S. companies—is only down 8% since the end of January. That’s much less than the Dow and the S&P 500.

If a trade war escalates, small caps will outperform multinationals.

The easiest way to gain exposure to the Russell 2000 is through IWM. It’s one of the safest places to hang out right now.

It’s a full-fledged online course that teaches you the ABCs of cryptocurrencies and their underlying blockchain technology. The course includes video lessons, instructional guides, downloadable resources, and a free electronic copy of Teeka’s new book on cryptocurrencies, New World Money.

The course is getting rave reviews from Palm Beach Letter subscribers…

From Luke W.: I began educating myself about cryptocurrencies in January 2018. I so wish I had this course when I started… It’s solidified much of what I’ve already learned and made me much more confident about investing in cryptocurrencies.

You have done an exceptional job. Now, I wish I could share the course with my family and friends to educate them about this new asset class. Thank you for compiling this invaluable information.

From Gladys A.: I was very satisfied with the Master Course lessons, especially Lessons 5 and 6, which clarified some misconceptions I had about buying and selling cryptocurrencies. Thank you for this valuable tool.

From Art M.: Well done! Although I began with a solid understanding of cryptos, this course added meat to the bone. My understanding and confidence has been noticeably enhanced. Thank you so much for taking the time to prepare this course.

From Jeff C.: I’ve been investing in cryptos for a while, but I still enjoyed the Crypto Master Course. I got clarity on things I already knew… and even learned some new things as well.

From Colin L.: The lesson videos and quizzes help you understand the basics of cryptocurrencies. Keep up the good work.

From Bruce R.: This course is very informative and great for beginners.

From James M.: Thanks for putting this course together.

Nick’s Reply: Thanks for the feedback, guys. If you’re not a Palm Beach Letter subscriber, you can learn how to sign up for Teeka Tiwari’s Crypto Master Course—and get a free gift from Teeka and Glenn—right here…

Almost NO ONE knows this millionaire’s moneymaking method exists.

It’s a secret so lucrative, it drew the attention of 12 of the world’s biggest financial institutions and CNBC.

He’s kept his lips sealed for 35 years. But today, everything changes… 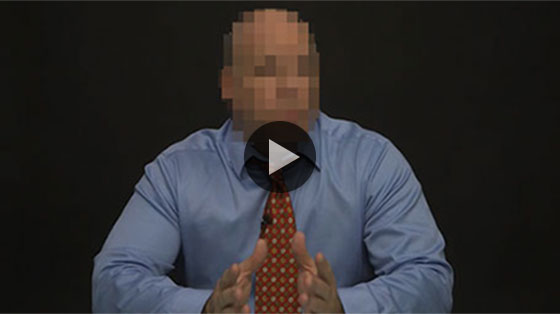