Nick’s Note: Some of the most influential players on Wall Street spent the last year taking swipes at the crypto market. When Jamie Dimon called bitcoin a “fraud” in September, it dropped 8%.

But as Palm Beach Confidential analyst Greg Wilson shows us today, these Wall Street giants are changing their tune. And that could send the whole market soaring, sooner than you expect…

“I could care less about bitcoin.”

That was Jamie Dimon—the CEO and president of JPMorgan Chase—speaking this past October at the Institute of International Finance.

He went on to say that governments would crush bitcoin one day.

Dimon has a long history of trashing bitcoin whenever he gets the chance.

In 2014, he said he wasn’t a fan because bitcoin was “being used for illicit purposes” and was a “terrible store of money.”

And in 2017, he famously called bitcoin and digital currencies a “fraud.”

With comments like that, we would excuse you if you thought JPMorgan hated cryptocurrencies.

As I’ll show you in a moment, Jamie Dimon isn’t the only Wall Street bigshot who hates cryptocurrencies. But like a lot of things with Wall Street, you should take what they say with a grain of salt.

In a moment, I’ll unveil the new narrative coming out of Wall Street and why you need to act now, before it reaches the masses.

Jamie Dimon isn’t alone. Many other Wall Street executives have shown their disdain for cryptocurrencies.

He recently said bitcoin was a bubble and was too volatile to be an effective store of wealth.

Larry Fink was equally dismissive. Fink is the CEO of BlackRock, the largest asset manager in the world. The firm has nearly $5 trillion in assets under management (AUM).

According to Fink, “Bitcoin just shows you how much demand for money laundering there is in the world.”

When asked about his skepticism, Weber stated, “It probably comes from my background as a central banker.”

Weber likewise doesn’t think bitcoin can be a means of payment or a store of value.

The list goes on… but you get the point.

Wall Street has made it obvious that it thinks very little about bitcoin and cryptocurrencies.

It’s a threat to traditional finance. Bitcoin’s underlying blockchain technology is decentralized. And that threatens the banks’ role as the primary intermediary between the government fiat money and consumers. It’s a lucrative business.

For example, JPMorgan made $113 billion in profits in the last five years alone. No one on Wall Street wants to see the money train derailed.

If you listened to their advice, you’re likely sitting on the sidelines.

But that’s a mistake. Behind the scenes, Wall Street is secretly embracing bitcoin and cryptocurrencies.

And a new narrative is emerging.

JPMorgan and the “Bitcoin Bible”

But some are calling it the “Bitcoin Bible.”

If you thought the report would state all the reasons why JPMorgan is against cryptocurrencies, you’d be wrong.

The report came to some startling conclusions.

Notably, that cryptocurrencies “are unlikely to disappear.”

That will likely surprise many who have just kept tabs on the headlines.

We found this conclusion most notable. It’s what we already told Palm Beach Confidential readers in December:

If past returns, volatilities, and correlations persist, cryptocurrencies could potentially have a role in diversifying one’s global bond and equity portfolio.

You Heard It Here First

It isn’t a surprise to our Palm Beach Confidential readers.

In December, we listed the new Wall Street narrative as one of our top three reasons why the crypto market would go 10 times higher in 2018. (Palm Beach Confidential subscribers can access the issue here.)

Here’s what we wrote then…

We envision Wall Street’s pitch will be that, by allocating 5–10% of your portfolio to bitcoin and other cryptocurrencies, you can actually bring down volatility. That’s because bitcoin is unaffected by crashes or booms in the stock, bond, oil, or gold markets.

Wall Street has a history of using stories, called “narratives,” to drive its investment decisions. Remember the internet “New Era” narrative and the housing “plateau of prosperity” narrative?

We also pointed out research that showed bitcoin is uncorrelated to other assets. That means the price movements by other assets, such as stocks and bonds, don’t affect bitcoin.

And that’s big for Wall Street.

They’re realizing that adding bitcoin to their portfolios will give them better risk-adjusted returns—meaning better returns with less volatility.

And that’s the new narrative JPMorgan and Wall Street will be pushing going forward.

What It Means For You

Consider for a moment if bitcoin and cryptocurrencies become part of global bond and equity portfolios.

Today you have an opportunity to get in before the big Wall Street money.

Act now—Wall Street is. Take advantage of the pullback and buy bitcoin today.

P.S. Keep an eye on your inbox this week. In my next essay, I’ll reveal what JPMorgan calls the “holy grail for owners and investors.”

Bitcoin has taken the spotlight in the financial world. But while most investors are focused on the cryptocurrency itself, the companies that use its technology will also be big winners in the years ahead.

To learn more about these companies—and how you can invest in them today from an ordinary brokerage account—click here. 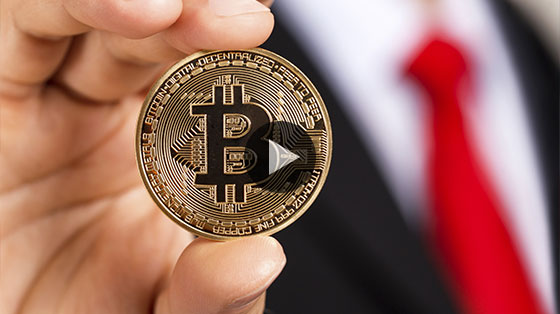