The last bull market was the longest and best-performing in history.

While the bull market in stocks generated plenty of buzz… gold got little love from investors. During the 11-year bull run in stocks, gold only gained 75%. That’s just 5.2% annualized.

It’s easy to understand why investors chose stocks over gold during the last bull run. Under normal circumstances, it’s often a terrible investment.

Although gold is a stable store of value, it pays no dividend… has limited industrial uses… and can go through long stretches of time where its price goes nowhere.

That’s why at PBRG, we recommend you allocate no more than 5% of your portfolio to gold and other precious metals. Sure, it’s good to hold as a hedge against chaos. But it can also mean foregoing much better returns during the good times.

We’re living in chaotic times. The coronavirus crisis has upended the entire economy.

Since the World Health Organization declared it a pandemic on March 11, the stock market is down more than 15% from its record high in February… A record 14.7% of Americans are unemployed… National GDP fell 4.8% in the first quarter… And more pain is expected.

The reaction to the pandemic has been equally extraordinary. Governments are spending trillions of dollars to rescue their countries from the effects. And central banks are lowering interest rates to near zero to jumpstart their economies.

In times like this, gold shines. In fact, it’s up 12% since the beginning of the year – outperforming almost every other asset class.

But when gold shines, gold stocks shine even brighter…

If You Own Gold, Consider Gold Stocks, Too

If you’ve been following the Daily, then you know for the first time in 20 years, editor Teeka Tiwari is buying sizable quantities of gold for his personal account.

When real rates go negative (like they are now, globally), smart money flees bonds and paper money as they drop in value.

Instead, they go for the protection of gold, which rises in value and offsets the losses from holding paper money… And during a gold bull market, the real magic happens when you own gold stocks instead of physical gold.

Those returns came from companies in the gold mining sector. And after struggling for years, some of the best are ready to take off.

Senior miners are larger companies with experienced mining operations. For instance, giants like Barrick Gold and Newmont operate dozens of mines around the world. Their job is to dig up the richest deposits at the lowest cost.

Junior miners are the tiny prospectors and exploration companies that take on the challenging task of discovering new projects of gold and other metals.

But a mine is a depleting asset. Even the largest mines will eventually run dry. So the task of exploring uncharted lands for new deposits falls to the junior mining sector.

And this space is set to explode. Let me explain…

Over the past few years, investors have fled the junior mining space.

You see, mining is the classic boom-bust sector. Gold was in a bust cycle until recently. So companies cut exploration projects to save money. That caused investors to bail.

Take the MVIS Global Junior Gold Miners Index, for instance. It tracks the performance of the most liquid junior companies in the gold and silver mining industry.

As you can see in the chart below, it’s down about 70% over the last nine years. 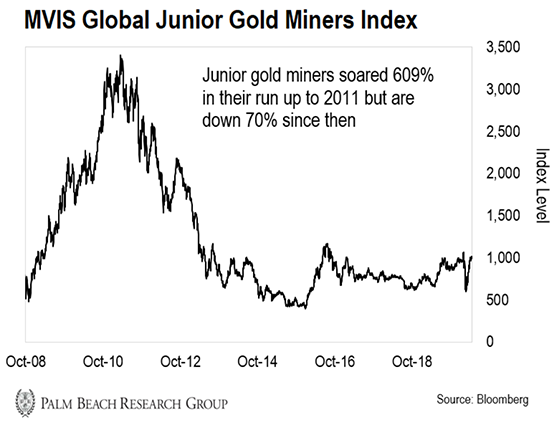 This is what happens during the darkest periods of boom and bust cycles. But it’s exactly this kind of profitable setup we look for.

You see, under the right conditions, the junior mining sector offers the perfect opportunity for asymmetric bets.

Here’s why: Senior miners are performing well. And many are flush with cash.

The VanEck Vectors Gold Miners ETF (GDX) – which tracks the overall performance of companies in the gold mining industry – is up 81% since its low in March.

And while more companies have suspended or canceled dividends this year than in the previous decade combined… senior miners like Newmont, Kirkland Lake Gold, and Yamana Gold have raised their dividends – 79%, 108%, and 56%, respectively – in the last few months.

That’s a sign of financial strength during a pandemic crisis.

And it’s likely we’ll see senior miners use their earning power to acquire mid-cap and small-cap miners. Once that happens, Wall Street will wake up to the huge opportunity in this space.

Remember, the last time we saw a setup like this was in 2008.

These are the types of asymmetric bets we love at PBRG. You just need a tiny grubstake for the potential to see life-changing gains.

It’s by far the largest exchange-traded fund in the junior mining space, with $4.5 billion in assets. And it provides one-click exposure to about 80 smaller mining companies.

Remember, this is a high-risk/high-reward sector. You don’t need to invest much for the potential of large gains.

P.S. In April, we added three tiny gold stocks to our Palm Beach Letter portfolio and they’re up an average of 44% since then.

But gold isn’t the only thing we’re bullish on. There’s another industry that is about to explode, too. In fact, Teeka calls it his No. 1 investment of the decade.