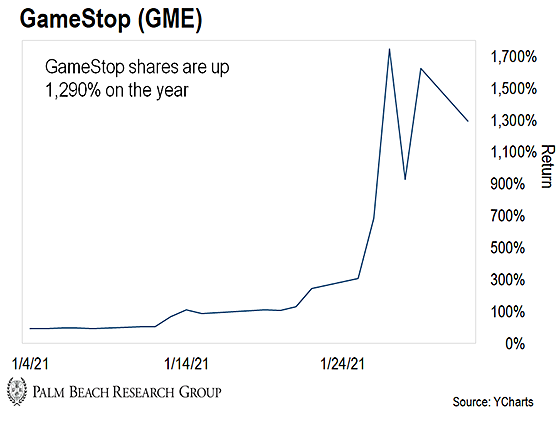 Now, it’s not too uncommon to see insane gains like this in such a short time.

Sometimes stocks will skyrocket on positive earnings reports… approval from a federal agency like the Food and Drug Administration… or just pure speculation.

But what we’re seeing with GameStop is different.

And for the first time in my long career in finance… I believe we may be seeing a real financial uprising on Wall Street.

GameStop’s incredible rally came after an army of small investors… spurred by an online trading community on Reddit… took on Wall Street short sellers who were betting GME would fall.

These grassroot activists realized if enough people got together and bought GameStop… they could “squeeze” the hedge funds out of their positions and force a massive run-up in the share price as short sellers bought GME to cover their losing bets.

The strategy was so successful, it forced the multibillion-dollar hedge fund – Melvin Capital – to throw in the towel.

According to a recent report in the Wall Street Journal, Melvin Capital may have lost 53% in January alone from its once $13 billion fund. Much of that loss is being attributed to its disastrous decision to short GameStop.

The losses were so great Melvin Capital had to receive an emergency $2.75 billion bailout by giant hedge funds Citadel and Point 72.

Friends, this is like David taking down not one – but multiple – Goliaths at once… And it’s unheard of on Wall Street.

Now, if you’re one of my longtime followers, you know I always come down on the side of the little guy. In fact, I’ve spent the past 16 years helping mom-and-pop investors use the same secrets millionaires and billionaires use to get rich in the markets.

So I’m happy to see Main Street turn the tables on Wall Street for a change. It’s time for these lovers of crony capitalism to get their comeuppance.

But I also want to warn you…

The financial establishment won’t take a licking like it did on GameStop sitting down. Already, the blowback against the “Redditor Army” has been swift and heavy…

Trading platforms like Robinhood stopped retail investors from buying GME to protect their Wall Street buddies. The sore-loser hedge funds are threating lawsuits. And even the Securities and Exchange Commission is getting involved.

I’m rooting for the “Redditor Army” and may even buy one share of GameStop as a show of solidarity. Not that I think I’ll make any money from it… Usually when short squeezes are over, the shares collapse.

But I have an affinity for GameStop. I remember taking trips there with my eldest daughter. We used to buy games for our Xbox and try out new ones. Those are great memories. If me buying a share of GameStop helps buy the company enough time to make a pivot that saves them… well, I’m all for that.

My sincere hope is these up-and-coming Reddit traders are able to exit their positions with massive profits. It would be wonderful to see an entirely new cohort of investors become wealthy off the back of the hedge fund elite.

Do I recommend you buy GameStop at this price? If your desire is to make money over the longer term… I would say no.

But if you really want to beat Wall Street at its own game, there’s a blueprint you can follow…

The Next Buying “Frenzy”

I worked on Wall Street for 15 years as an executive and then another 10 years as a fund manager. And if there is one thing I’ve learned… it’s to never believe what Wall Street says, and look at it what it does instead.

Right now, Wall Street is in love with initial public offerings (IPOs). An IPO is when a private company lists its shares on a public exchange like the NYSE or Nasdaq.

According to The Wall Street Journal – the bible of the financial establishment – IPO buying is in a “frenzy.”

Last year was the biggest IPO boom on record. More IPOs doubled in their debuts than in any year since the tech boom… And I believe 2021 could be even bigger.

But Main Street investors piling into most IPOs don’t realize Wall Street is fattening them up for the kill.

Take the IPO of tech stock Root, for example.

Analysts called the auto insurance company “disruptive.” Some said its technology would “revolutionize” how people shop for insurance rates.

And it’s only gotten worse. Anyone who bought Root on IPO day and continued to hold until today is down more than 22%.

But it gets even worse than that…

Retail investors who were lured down what I call the “Hype Hole” path didn’t just take a loss… they paid for someone else’s gain… Wall Street’s gain. Goldman Sachs and Wells Fargo saw a $724 million payday when Root went public. That’s a 7,141% gain.

And who do you think funded that $724 million bonanza? All the retail investors that bought Root on IPO day, that’s who.

So what’s the solution for the small investor?

There are two ways to play today’s red-hot IPO market: The Hype Hole path and the Blueprint path.

The Hype Hole path is when you buy a private company on the day it goes public – IPO day.

The Blueprint path is when you buy a private company before it goes public – sometimes called a pre-IPO deal.

The Hype Hole path is the one most retail investors are sucked into. The Blueprint path is the one Wall Street elites and well-connected Silicon Valley insiders use to make their fortunes.

I know many of you out there want to turn the tables on Wall Street. And you may think the best way is to “squeeze” short sellers like the Redditor Army did to the hedge funds shorting GameStop.

Sure, it was great to see these billionaires get a taste of their own medicine. But those gains are peanuts compared to what Wall Street makes in the pre-IPO market.

If you truly want to stick it to Wall Street, follow the Blueprint path. This is the road to making a killing in IPOs they hope you never find out about.

Last week, I held my first big event of the year to show you how to choose the correct path. You can watch the replay right here…

P.S. As I mentioned above, if you want to turn the tables on Wall Street, you need to beat it at its own game. And that means finding groundbreaking ideas before the masses get in.

And right now, I’ve been looking at what I call the “investment of the decade,” which can transform your life…

It’s like buying Microsoft in the ‘80s… Amazon in the ‘90s… and Bitcoin 2010. Any one of these could have made you a millionaire many times over. Starting with very little.

I’ve revealed all the details in this special presentation. Click here to watch it…