As you may know, an initial public offering (IPO) is when a private company lists its stock on a public exchange to raise money for growth and expansion. And in 2020, Root looked like a prime IPO candidate.

Analysts called the auto insurance company “disruptive.” Some said its technology would “revolutionize” how people shop for insurance rates.

The company had its initial public offering (IPO) on October 28, 2020. After jumping out of the gate to $29 – shares quickly plummeted 9%.

And it’s only gotten worse. Anyone who bought Root on IPO day and continued to hold until today is down more than 22%. 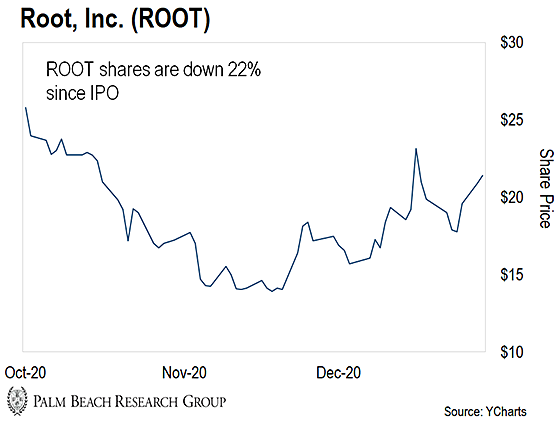 Here’s why I’m telling you this about Root…

Everyone knows 2020 was the biggest IPO boom on record. More IPOs doubled in their debuts than in any year since the tech boom.

And some of the biggest names to go public in 2020 were Airbnb, DoorDash, GoodRx, Palantir, Snowflake, and Warner Music Group. Since their debuts, these companies have returned an average of 78%.

Those are solid numbers… But what most investors don’t know is this: It often pays to wait to buy an IPO.

You see, private companies often go public with lots of hype… and they can surge by double-digits on IPO day. But those initial returns are usually wiped soon after as early investors pocket their windfalls.

With 2021 shaping up to be an even bigger year for IPOs than 2020… many investors will jump headfirst into the next hyped-up names. (On tap this year are unicorns like Instacart, Petco, Coinbase, and Nextdoor.)

Now, some of you may want to invest in these multibillion-dollar companies as soon as they go public. But quite often, it pays to wait…

Our general rule of thumb for IPOs is that you should wait if you can’t get an early allocation (more on that below). That’s because even if you’re not an insider, you’ll likely be able to buy the IPO at a discount a few months later.

You see, there’s a little loophole that the average Joe can take advantage of. It’s called the “lock-up period.”

When a company is private, a small number of insiders like company executives, employees, and venture capitalists can buy early shares.

But they’re bound by a lock-up period (typically around six months) when the company goes public. During that time, they can’t sell their private shares.

Since they’ve been holding their shares for usually five to 10 years… the market knows that once the lock-up period expires, insiders will sell a significant number of them the first chance they get.

When the company went public on May 18, 2012, shares shot up to $45 on the first day. Early investors sold soon after… and shares bottomed just a few months later.

But if you’d waited the full six months after the IPO, you could’ve gotten Facebook shares for around $18 – 60% below the IPO-day price. Today, Facebook trades above $250. 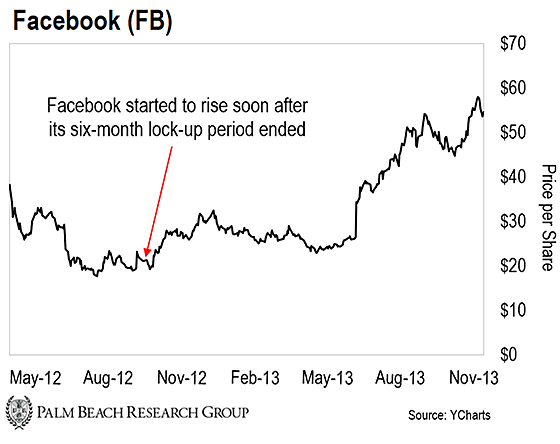 Of course, not all IPOs follow the same pattern as Facebook. But one thing holds true: If you wait, you’ll almost always have the chance to buy a stock at a cheaper price.

The “Blueprint Path” to IPO Riches

Teeka says there are two paths investors can take when investing in IPOs. The “Blueprint” path and the “Hype Hole” path.

So what’s the difference between the two?

Investors on the “Hype Hole” path buy companies on the day they go public. That’s when you see an initial price spike from all the “hype” surrounding its IPO.

Hype Hole investors are usually buying at a premium because IPO shares often fall after the lock-up period.

The Blueprint path is buying companies before they go public. That’s the path Wall Street elite and Silicon Valley insiders use to make their IPO fortunes.

On this path, you can buy pre-IPO shares for pennies and then sell them for huge gains when they go public. In other words, you’ll be selling to investors buying the hype.

For instance, Main Street investors made 31% when Amazon went public. But pre-IPO investors walked away with 9,165%. We saw the same thing with Google: An 18% gain for Main Street versus a 1,500,000% gain for private investors.

IPO day investors saw an average 78% gain from those companies. But investors who chose the Blueprint path have seen average gains of 2,796%.

Now, finding the best deals on the Blueprint path isn’t easy. There are a lot of bad deals out there. It takes real research to separate the good from the bad.

That’s why last week, Teeka held a special presentation to show you the difference between Hype Hole and Blueprint IPOs.

Along with his free training, Teeka also unveiled how you can get access to his first-ever Blueprint pre-IPO tech deal. Shares are priced at just 50 cents each. So with a $500 grubstake, you’d own 1,000 shares.

Look, IPOs are exciting, and you’ll hear plenty of stories about large, one-day gains. But don’t buy into the hype right away. You’ll likely end up overpaying for shares when the company goes public.

Wait for the lock-up period to expire. Or even better, consider going the Blueprint path and buying pre-IPO shares. They’re a real game-changer for retail investors.

P.S. You don’t want to delay on Teeka’s latest opportunity. You can get in this Blueprint path pre-IPO tech deal for 50 cents per share ($500 gets you 1,000 shares). But space in this pre-IPO deal is strictly limited by law. Click here to learn more…