“It is essential that [our country] gets back control of its national borders once and for all. Without borders, neither defense nor security is possible.”

The quote above looks like it could have come straight from Donald Trump’s mouth. We wouldn’t be surprised if you thought so, too.

They came from Marine Le Pen—France’s version of “The Donald.”

Like Trump, Le Pen is riding a populist revolt. She’s leading the polls heading into France’s May 7 presidential election. 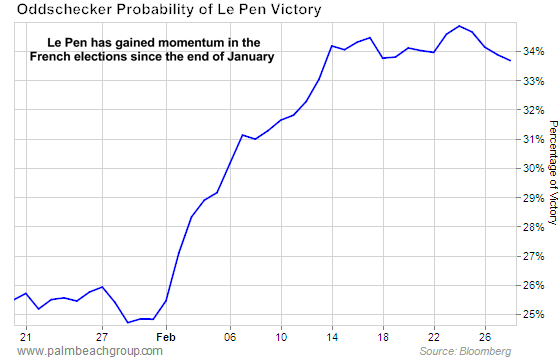 And if you aren’t prepared for what could happen next, you just might wake up on May 8 with a big hole in your portfolio.

Why is Le Pen doing so well?

Much like the average American, the average Frenchman is fed up. You can’t blame him. There’s a lot on his mind.

Tourism was down nearly 5% in 2016 following a spate of terrorist attacks. In fact, a recent French newspaper poll found that 97% of citizens feel threatened by terrorism.

Le Pen’s populist message resonates with many French citizens. For France to be great again, it must:

President Trump used the same rhetoric to win the U.S. election. So did the Brexit supporters in Britain… And Quitaly supporters in Italy.

They all rejected globalism in favor of nationalism.

For Le Pen to achieve her goals, France would have to follow Britain out of the European Union.

A French exit from the EU would deal the deathblow to the euro experiment. And send the global economy, including here in the U.S., into a tailspin.

Globalization Is on the Retreat

For more than six decades, globalization was an unstoppable force. Le Pen is part of a major movement sweeping that trend aside.

The eurozone is at the epicenter of this battle. And that’s a big deal…

If France elects Le Pen, she’ll likely follow Great Britain out of the EU. That would put the final nail in the EU’s coffin.

If the EU collapses, countries will need to renegotiate trade treaties. Tariffs will increase as nations try to reduce imports from rivals. Trade wars could ensue.

The ripple effects will be felt in the United States, too.

As we told you before, the last five U.S. recessions all coincided with a decline in global trade.

If you’re holding multinational companies with a large presence in Europe, keep a close eye on your portfolio come May 7.

If Le Pen looks like she’ll win the presidential election, you may want to consider dumping those companies from your portfolio… and buying small American companies or even a chaos hedge like gold or bitcoin to protect yourself.

Le Pen’s election isn’t the only factor looking to shake up the global economy.

In July of last year, a rate hike in March wasn’t even a remote possibility. But the economy picked up steam. And with Trump’s planned stimulus, some people are seeing signs of inflation.

If inflation picks up, the Fed needs to raise interest rates. Otherwise, inflation could rise too much too fast and devastate the economy. 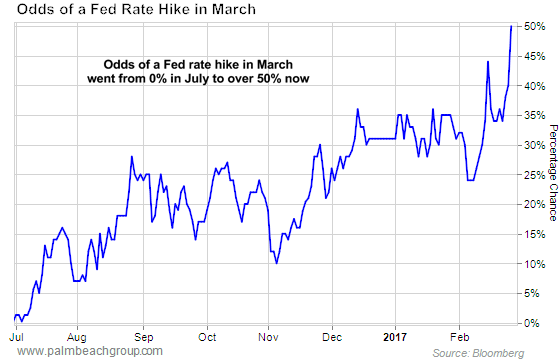 This is a big deal. Few expected the Fed to raise rates this fast. If it does, cash and bonds will look more attractive as investments.

Stocks—especially those that are bond proxies—will go down as interest rates rise.

Watch interest rates closely… Once they get too high, stocks could fall.

The Government’s Latest Plot to Grab Your Cash

There’s a new tactic in the War on Cash…

The Arizona Senate passed a bill that would let cops seize assets of people who participate in protests that turn violent… even if you had nothing to do with any violence.

If the bill is signed into law, police can seize assets of anyone who attends a peaceful protest that turns violent. It also gives cops the power to arrest people who planned the events… even if they didn’t personally commit violence.

PBL editor Teeka “Big T” Tiwari warns that this is just the latest example of the War on Cash. In today’s must-see 3-Minute Market Minder (transcript included), Big T shares two ways to protect your wealth from this cash grab.

World Trade Weakens: The World Bank says global trade has dropped to its lowest level since the Great Recession of 2008. Bank officials say the drop-off is due to political uncertainty. One of the main forces of political uncertainty is protectionism. Keep an eye on May 7. If Marine Le Pen wins the French presidential election, we expect this downtrend in global trade to continue.

Return of the Franc?: Meanwhile, Le Pen’s nationalist party is advocating a return to a new franc closely tied to the euro. Some analysts believe a switchover would cause chaos and create a massive contagion throughout the eurozone. Le Pen’s support for dropping the euro and exiting the EU backs up our thesis that globalization is on the retreat.

The Cheap Way to Get Courtside Seats: The NBA is betting big on VR technology. Last week, the league made its very first original content for VR headsets. The new show is called House of Legends. However, Digital Trends reports the new show is just the beginning. The NBA will begin offering new virtual reality gear that allows fans to watch games “immersively” rather than on TV. It’s like having a courtside seat from your own couch. Yet more proof that virtual reality is reaching its mass adoption point.

From Paul W.: I have been investing in cryptocurrencies with Teeka’s advice. And what’s particularly cool is now that bitcoin has doubled since I bought it, I’ve been able to withdraw my original investment and use “house money” to make all of Teeka’s new cryptocurrency investments.

Editor’s Note: The Great “Wall” of Trump is still a hot topic.

From Carol G.: Donald Trump’s effort to build a wall between the U.S. and Mexico is ludicrous. The money needed to build the wall could be put to better use given that many of the people it’s supposed to keep out aren’t even Mexicans.

From Donald B.: I think that we should use robots to replace Congress. First, robots work for a lot less money than those idiots. Second, I’ve never heard of a robot involved in a sex scandal. And third, robots don’t need to fly home on the taxpayers’ dime. They could just send a thumb drive via the postal service to a surrogate robot back home and park themselves in a corner until it’s time to go back to work.