The announcement was like a starter pistol going off before a race. It set off a succession of mergers…

In January 2019, Barrick’s largest rival—Newmont Mining—announced its own deal to buy Goldcorp for $10 billion, creating the world’s largest gold producer by output.

A month later, Barrick launched a $17.8 billion hostile bid to buy Newmont. The move sent shockwaves through the industry.

Barrick eventually dropped the bid. But the two giants agreed to a joint mining operation venture in Nevada.

Now, mergers and acquisitions (M&As) happen all the time. And I monitor them each week as part of what I do at our elite trading service, Teeka Tiwari’s Alpha Edge.

You see, M&As in the gold mining space offer high upside compared to those in other industries. And that’s exciting. Buyout targets can surge overnight—handing well-positioned traders like us double- and triple-digit gains.

So today, I’ll tell you why these mergers mean higher prices ahead for gold mining stocks—and how you can play this trend.

But first, let me show you why we think gold prices are going up…

Mining deals are on the rise for two primary reasons: supply and price.

In terms of supply, miners have been in a brutal bear market since 2011. Falling prices forced companies to rein in their exploration budgets. At the same time, they had to keep producing gold and silver to pay their bills.

And as companies mine their resources, they reduce their asset bases. To replace them, they must find new deposits or merger partners.

Exploring for resources is a tough, risky business. Instead, it’s easier for large players to buy proven deposits through mergers. They can let the exploration companies do all the hard work, then show up with a check.

And it makes the most sense to acquire well-run miners when their asset prices are rising. That brings me to the second reason mining deals are on the rise: the stealth bull market in gold.

As you can see in the chart below, gold has outperformed the S&P 500 over the past year: 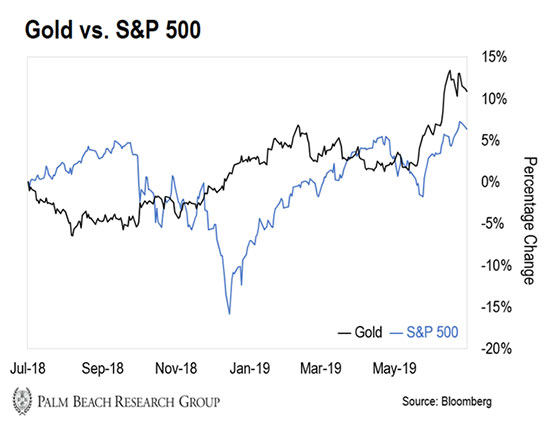 While both are up, gold has quietly led the market by over three percentage points.

In fact, recently, the gold price hit six-year highs around $1,400 per ounce… And we expect this trend to continue.

The combination of surging inflation and low interest rates will cause a sharp increase in negative rates.

And faced with losing 1–2% per year holding government bonds… pension funds, central banks, and professional investors of every ilk will go full-tilt into gold.

Under this scenario, gold could easily trade at $2,500 per ounce. And this price action will ignite a gold stock rally unlike anything we’ve seen since the early 2000s.

And we’re already seeing this happen…

Last year, central banks bought 651.5 tons, up 74% from the previous year, according to the World Gold Council. And official sector purchases could reach 700 tons this year, Citigroup reports.

Private buyers remain active, too, with demand up 3% year-over-year. In fact, we’ve seen investing luminaries such as Paul Tudor Jones, David Einhorn, and George Soros all get bullish on gold this year.

Bottom line: A combination of steady, increasing demand caused by negative real rates and a lack of any major new supply (from new discoveries) will continue to propel prices upward.

And buying well-run small- and mid-cap miners will allow the majors to add to their asset base—and capitalize on gold’s next bull market.

You see, miners are leveraged to the price of gold…

We can illustrate this leverage at work with an example…

That’s leverage at work. And that’s why high-quality mining stocks can skyrocket in a gold bull market.

Plus, with the mining M&A boom just getting started, prices will head even higher…

How to Play Merger Mania

If gold approaches its previous highs near $1,900 per ounce, it’d be a 35% gain from current levels.

And a simple way to play gold’s surging price is SPDR Gold Shares (GLD), which tracks the price of gold.

You can also consider the VanEck Vectors Gold Miners ETF (GDX). It holds a basket of gold miners.

Remember, mining companies are volatile. So be sure to do your homework before investing.

P.S. GLD and GDX offer broad exposure to the new stealth gold bull market. But if you really want to position yourself for double- and triple-digit gains, mining buyout targets are the best plays.

And at 1 p.m. tomorrow, Teeka and I will reveal the strategy we’re using to profit from this trend during a confidential investment briefing.

But timing is critical here. Large gold companies are circling with their checkbooks. You need to act now—so click here to automatically reserve your spot. Let us show you how this strategy can put you on the path to making $1 million over the next 12 months.