For five years now, I’ve probably talked about crypto halvings more than anyone in the newsletter business.

And thanks to those halvings, I’ve arguably helped more people become millionaires than anyone else in this industry.

If you’re not familiar with halvings, it’s when a crypto’s supply cuts in half at a preprogrammed point in time. Bitcoin halvings, for example, are preprogrammed to happen every four years.

Even after bitcoin’s 2020 halving, my team found six altcoins (coins other than bitcoin) with similar halvings embedded in their codes. They’re up an average of more than 1,000% since we added them to our portfolio in November 2020.

If you didn’t position yourself before those halvings… I have some bad news for you. It’s too late to make life-changing gains from them.

But the good news is I’ve found a once-in-a-lifetime event happening in the crypto market that’ll be bigger than all the other halvings combined.

I call it the “Super Halving.”

If you watch the news, you haven’t heard a word about this Super Halving. The mainstream financial media is clueless about it.

That’s because they’re not in the room with crypto founders like I am. They don’t have the phone numbers of dozens of the top crypto and blockchain venture capitalists on speed-dial like I do.

They’re not meeting with developers… They’re not getting pitched to join the boards of blockchain startups. They have no idea what’s truly going on in this space.

And they’re missing a huge opportunity.

I predict bitcoin will reach $500,000 within the next five years. And when it does, we’ll be able to trace it back to this Super Halving.

The Super Halving Is Different

There can never be more than 21 million bitcoin in existence. That issuance is strictly regulated by computer code. So, following the four-year halving cycle, we know the last bitcoin will be mined in 2140.

That’s where we are today.

But this Super Halving I’ve discovered – and that I believe will go into effect in 2021 – will be different.

It’s not tied to bitcoin’s code. And it’s not going to reduce supply to 450 bitcoin per day. In fact, I believe it’ll knock the available new supply all the way down to zero.

Let me be clear… The Super Halving is not a preprogrammed, one-day supply drop like we’ve seen in the past. It’s unlike anything we’ve seen before. It has nothing to do with bitcoin’s code.

Instead, it all has to do with bitcoin miners.

Miners are the people providing the computing power necessary to run the bitcoin blockchain. They solve complex equations to verify transactions and keep the network humming along.

The incentive for devoting their time and processing power is a daily bitcoin reward for their efforts.

With the bitcoin code now issuing 900 new bitcoin per day directly to miners, that’s a chance to earn around $50 million worth of new bitcoin every day.

Not bad for a day’s work. But there’s one problem…

Historically, bitcoin miners haven’t been able to hold the bitcoin they mine. They’ve had no choice but to sell it to fund their operations.

Think about it. Ever since bitcoin’s been around, it’s been plagued with negative connotations to the drug market, pornography, and money laundering. That made it a taboo investment for the gatekeepers of traditional finance.

So bitcoin miners haven’t had access to traditional sources of capital.

But we’ve seen crypto adoption take off significantly over the past few years. And huge players like Morgan Stanley, Goldman Sachs, and MassMutual are taking notice.

One after another, these big institutions are now coming into crypto. And that means now, for the first time, miners can raise money through the capital markets by issuing shares (equity) or bonds (debt).

We’re moving to a world where bitcoin miners will no longer have to sell their bitcoin to fund their operations. And that’s going to change everything.

This year, crypto companies have already raised 10 times more capital than all of last year. So miners don’t have to sell all their bitcoin anymore. They can hoard it.

It’s a fundamental shift the mainstream press is missing. 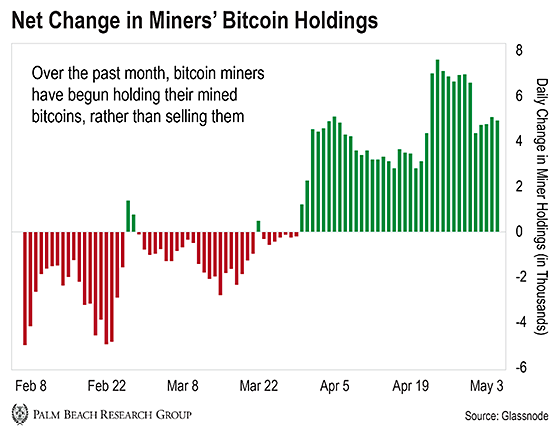 Over the past month, the net position change among all bitcoin miners has firmly swung into an accumulation stage (the green bars).

They’re holding thousands of more coins daily instead of selling thousands, as we saw earlier in the year.

One recent example of this trend is a U.S.-based mining company…

It’s a little-known company that’s been mining bitcoin for years. But it had to sell its bitcoin because nobody would give it funding.

Recently, Fidelity and Morgan Stanley plowed $425 million into this project.

Now that it’s sitting on $425 million in cash, do you think it’ll ever have to sell its bitcoin again just to keep the processors running?

The value of that cash isn’t going to budge. If anything, it’ll go down. But the value of the mined bitcoin will only continue to rise over time. So you can see which one miners are more likely to hold now that they have the option.

When I saw this, I realized we’d entered a new phase in the crypto market. The game will completely change going forward. Miners will start tapping public markets for capital. And they’re never going to sell their bitcoin again.

Let me emphasize: 2021 may be the last year anyone can ever buy a newly mined bitcoin.

Now’s the Time to Get Exposure to Bitcoin Miners

What happens to bitcoin’s price when miners are hoarding it… companies are adding bucketloads of it to their treasuries… payment companies are buying nearly 100% of newly minted coins… and credit card companies are paying out $900 billion a year in bitcoin rewards?

Its price shoots through the roof. That’s what happens.

More importantly, what does that do to the price of the small plays attached to bitcoin and bitcoin mining, in particular? My research says they could go up 50x or more.

That’s why last week, I discussed six small crypto-themed investments I believe will skyrocket as the Super Halving kicks in this year.

I’ve never published a word about these special recommendations before. I haven’t mentioned them in any of my research services… video updates… or articles.

This is the first – and only time – I’m making them available.

Friends, this is a once-in-a-lifetime opportunity in front of you. Because when it’s over, it’ll be gone for good.

So you need to position yourself before the Super Halving starts. That’s how you profit from the explosive surge in price, fueled by reduced supply and increased demand. Plus, the recent pullback in the broader crypto market is giving us an excellent buying opportunity.

If you want broad exposure to this trend, consider the Amplify Transformational Data Sharing ETF (BLOK). It holds some of the largest bitcoin miners… but also includes companies in the broader blockchain ecosystem… So it’s not a pure play on miners.

But if you want the chance to make 20–50x gains from the Super Halving, click here to learn how to access the six crypto-themed plays that I believe will rocket higher in price.