It was one o’clock in the morning. Three men gathered in a small office in the desert town of Antofagasta, Chile.

For hours, they passed around a bottle of scotch while hatching one of the greatest plans in mining history.

Their target: a rust-colored hill in the rocky desert. A place they guessed hid a billion-dollar treasure.

But there was a problem. A local lawyer had squatted some half-baked mineral claims atop the hill, blocking their way. They needed a workaround.

Their plan was simple: Pretend to be a local miner, whose claim would be seen as more important than the lawyer’s.

They drew up a simple mineral claim. The language was basic, the kind an uneducated miner would use: “I claim the land to the north of this small hill.”

They agreed to call the prospect Escondida, then drafted the claim document. The next day, it was signed by their janitor and then submitted to the Chilean authorities… who granted the claim.

The three men drilled underneath the hill—and found the largest copper deposit in the world.

Today, the Escondida mine is still the world’s largest single copper producer. It’s been operating for 30 years. It puts out nearly a million tonnes of metal yearly. That’s about 5% of global copper production.

The Most Exciting Mining Events

The mining industry gets huge mineral finds like this every cycle. They’re the most exciting events in the business.

Some of the quickest, most massive gains in mining investing come when tiny juniors make strikes in unexpected places.

And the mining sector in general is now picking up.

Gold launched over $1,500 per ounce this month for the first time since 2013. That’s brought investors back to major gold companies. One of our picks in my investment newsletter, International Speculator, jumped 25% in just six weeks.

That’s exceptional over such a short period.

Peak Gains in Under Two Years

Diamond Fields’ share price rose 2,025% in less than a year.

Over the last 35 years, there have been 11 very notable discoveries in the mining space—the majority of which reached peak valuation in under 24 months. You can see this in the chart below: 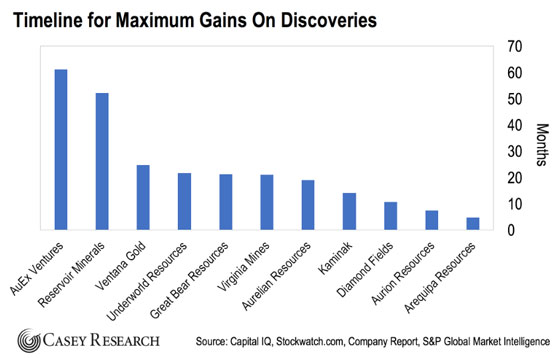 Now, my team and I looked into the biggest junior discoveries of the last 35 years. These are companies that found new, massive deposits of gold, copper, and nickel. Many of them made billions in profits for shareholders.

Check out the chart below to see the gains… 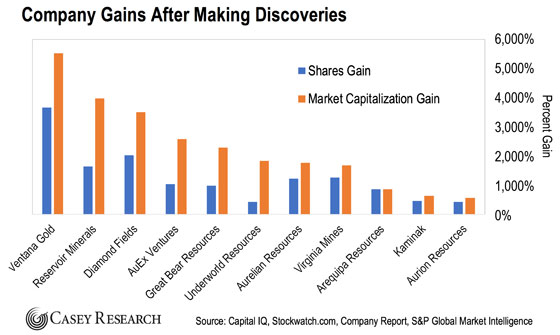 Shares of mining companies shot up thousands of percentage points on the back of discoveries… and like Diamond Fields, some even took less than a year to go from penny stocks to billion-dollar buyouts.

That’s because when a true discovery comes along, major mining companies know it. And when they see it, they want it. This often quickly leads to a feeding frenzy of takeover bids.

How to Find the Next Big Discovery

Our case studies reveal a simple rule: Discoveries are made using old technology in new places or using new technology in old places.

That was the case with Arequipa Resources in Peru. In the early 1990s, the country was emerging from a horrific guerrilla war. There had been almost no exploration.

Arequipa’s geologists literally walked up to a hill where high-grade gold was sticking out on the surface.

It was a similar story with Reservoir Minerals in Serbia and Aurion Resources in Finland. Both countries recently opened for widespread mineral development—and these juniors were first-movers.

Not all new places are that far afield. AuEx Ventures made a discovery by going to a part of Nevada no one thought had gold. Diamond Fields hit the jackpot in a remote, underexplored part of eastern Canada.

Both Underworld Resources and Kaminak Gold made discoveries in established mining areas. The trick was, they used brand-new techniques for soil sampling. These uncovered geochemical anomalies no one had seen before.

Great Bear Resources made a find in the middle of a major gold camp. It carefully compiled data into a new computer model. The model showed a different view of the underground geology, prompting it to drill where no one else had.

We recently recommended a new company in International Speculator that uses both sides of our rule. The company is using a new geologic mode—plus a careful compilation of old data—to target something no one has ever looked for.

If you’re not a subscriber yet, I’ll show you how you can join my elite service—and get access to three stocks you can brag to your friends about for the rest of your life…

Plus, I’ll tell you about a sneaky technology that can disrupt our society with the flick of a switch (the Russian military controls it)… and what President Trump is doing about it. It’s a story you won’t see anywhere else.