The Birth of the Petrodollar

On August 15, 1971, President Richard Nixon closed the international gold window to stop the outflow of gold. Nixon assured the world that this closure would only be temporary.

“Your dollar will be worth just as much tomorrow as it is today,” Nixon proclaimed on television with a straight face. “The effect of this action, in other words, will be to stabilize the dollar.”

But Nixon had a trick up his sleeve.

Along with his Secretary of State Henry Kissinger, Nixon struck a deal with the Saudi Royal Family. The Saudis agreed to price all international oil sales exclusively in U.S. dollars. They would refuse settlement in all other currencies. In return, the U.S. would provide military protection and military-grade weapons.

This deal effectively kept the U.S. dollar as the world’s reserve currency, even with the breakdown of the Bretton Woods System.

By 1975, all OPEC nations followed suit and agreed to settle oil trades exclusively in dollars. These were the largest oil producers in the world, and they only accepted dollars. Which meant all other countries still needed to obtain dollars to purchase oil.

This is where we stand today.

We are in the midst of a global experiment with fiat money.

Since 1971, the U.S. dollar and all other currencies have been created from nothing by government decree. That is the definition of “fiat” currency.

All restraints on currency creation have been removed.

It took a little while for governments to catch on. But throughout the 1980s, national governments realized they had unlimited money to spend.

And spend they did. But their money-for-nothing policies were not without consequences. Prices for goods and services exploded across the board as new money flooded into the economy.

The obscured fact is that this is not a case of rising prices. Your dollars are actually losing value over time—thus requiring more dollars to buy the same item. Price inflation is an artificial monetary event.

To come full circle, the U.S. dollar has lost 96% of its value since the Federal Reserve opened its doors in 1913. Stated another way, the dollar could purchase nearly 50 times more goods and services back in 1913 than it can today. 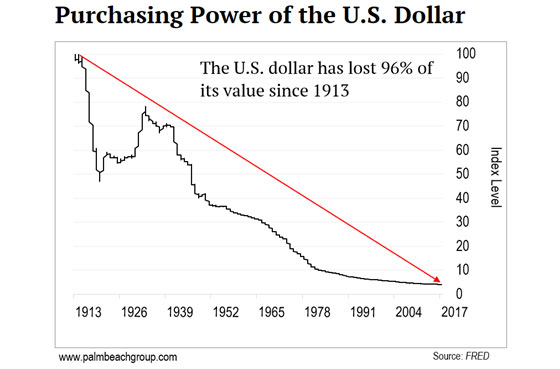 Despite Nixon’s proclamation on national television, the value of the U.S. dollar fell off a cliff.

While incomes in general have also risen during the last 100 years, their rise has not kept pace with the dollar’s loss of value. This is the primary reason households now require two wage earners to make financial ends meet.

The global experiment with fiat money has also led to an explosion of debt, especially in the Western economies and Japan. Without sound money restraint, nations have been able to finance deficits and run up enormous debt that can never possibly be paid back.

The United States’ national debt has now eclipsed $19 trillion.
Here is the numerical representation of the U.S. debt:

This is an incredible amount of money, especially given we are talking about the issuer of the world’s reserve currency.

And it is not just the U.S. Every major country in the world has run up its sovereign debt bill significantly over the last 30 years.

But sovereign debt is only part of the story, and a sticky part at that.

Governments accumulate sovereign debt when they issue bonds… which, in the United States, is done through Treasury auctions.

The U.S. Treasury sells notes and bonds of various durations (2, 3, 5, 10 and 30 years) at “auction.” The bonds are sold at a “market” rate of interest where the Treasury promises to make interest payments to the bondholder semi-annually for the length of the term, and then repay the principal balance upon maturity.

Here’s the sticky part: National governments can easily “roll over” their outstanding debt by issuing new bonds to pay off the old bonds when they come due. If market demand for the new issue falls short, the central bank can simply create more dollars to buy the new bonds.

That is the magic money machine. And it is how they kick the debt can further and further into the future.

Here’s the other part of the story: unfunded sovereign liabilities far exceed sovereign debt around the world… especially in the U.S.

Unfunded sovereign liabilities are future expenses that governments have already committed to paying. The biggest of these are pension plans and health care programs—Social Security and Medicare in the U.S.

Generally Accepted Accounting Principles (GAAP) require private companies to report unfunded liabilities in their financial statements… but government gets a pass. So, you won’t find these listed on any government balance sheet.

Boston University economist Laurence Kotlikoff estimates U.S. unfunded liabilities to be $222 trillion. The bulk of this comes from Social Security and Medicare.

It wasn’t always this way. Social Security was solvent in its early years.

And it was a great deal for a lot of people who retired in the early stages of the program. Take the story of the first Social Security payee, Ida May, for example.

Ida paid a full $24.75 into the system before retiring. She lived to receive nearly $23,000 in retirement benefits. No one thought twice about this at the time because there were 42 workers for every person receiving Social Security benefits.

There are now 2.8 workers for every Social Security beneficiary. Simply put, there are no longer enough workers to pay for retirees. The difference is the unfunded liability.

Social Security is already running a $50 billion deficit annually. That is with most of the Baby Boomer generation still working.

This annual deficit will grow larger and larger as the Boomers retire. And demographics show that there will be 10,000 people in the United States turning 65 every single day for the next decade. That’s a whole lot of people knocking on Social Security’s door.

The Medicare system is not doing much better. Medicare is currently running a $30 billion deficit annually. Again, that deficit will grow larger as the Baby Boomers retire.

I am highlighting the U.S. government simply because of the dollar’s supremacy in global finance. But they aren’t the only culprits. Most developed nations have accrued unfunded liabilities to some degree.

Free market economists have been decrying this system since it came about with the Nixon shock in the 1970s. “It will never work,” they said. “The feds will destroy the currency.”

But the fiat money system is still chopping along nearly 50 years later. Fiat currencies have plummeted in value since this experiment began in 1971. But they haven’t died.

The old free market economists could not foresee how the central bank would be used to crank out new money and lock away bad assets. They underestimated the power of the magic money machine.

Or perhaps they just confused inevitable with imminent.

The magic money machine cannot reverse course. The debt and unfunded liabilities accumulated can never be paid off. They can only be “rolled over” by creating more money and more debt. This guarantees that fiat currencies will continue to lose value every single year.

Which means the money you work so hard for will constantly lose value… forever. The magic money machine will never stop stealing purchasing power from you…

Up until 2009, there were no alternatives to this system. You were stuck holding paper money that was depreciating by the day. You were trapped in the rat race.

Bitcoin gives you a way out. With bitcoin, you can exit the abusive fiat money system. You can hold money that will grow in value over time because it is extremely scarce. And you can stop the magic money machine from stealing the value you work so hard to earn. 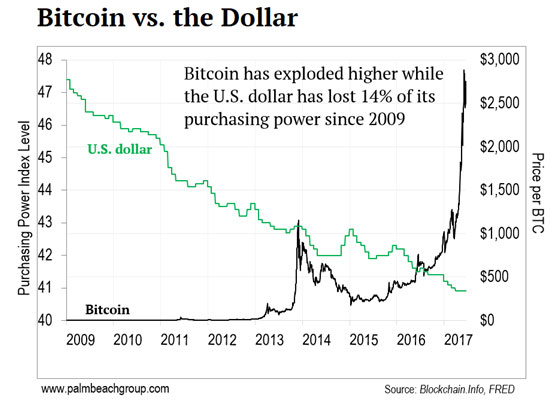 The abusive fiat money system creates a world in which you must work harder and harder just to maintain the same standard of living. It is impossible to save money because that money constantly loses value.

Bitcoin reverses this dynamic. It allows you to truly reap the fruits of your labor. And bitcoin makes it much easier to maintain, or even increase, your standard of living over time.

That is why I chuckle whenever I hear the objection: “But I can’t buy my coffee with it.”

One day you will be able to buy everything with bitcoin as easily as you swipe your credit card today. But that misses the entire point.

Bitcoin was born from the ashes of the 2008 financial crisis. It is here to give you a way out of the abusive fiat money system. It is here to hold the institutions accountable for stealing your purchasing power. Bitcoin is here to empower you, as an individual.

Bitcoin gives you 100% control of your money. It makes you the President and CEO of your own bank—with all the power and responsibilities that entails.

In a moral system, hard work and dedication should pay off. You should be able to set concrete financial goals and then plan how you will achieve them.

That’s why bitcoin is here—to level the playing field. Ultimately, bitcoin is going to give you back control of your financial destiny.

Nick’s Note: Bitcoin and other cryptocurrencies are powering a financial frenzy in America’s first new “stock exchange” since 1971. New World Money tells you everything you need to know about profiting from what some are calling the “New Nasdaq.”

You won’t find New World Money on Amazon, Barnes and Noble, or any public bookseller. But you can learn how to get a FREE copy rushed to you right here…

Thanks to one highly predictable act of government meddling, you could see triple-digit gains in as little as 24 hours.

These trading windows open and close like clockwork. But they only come four times a year. The last one closes by December 30. 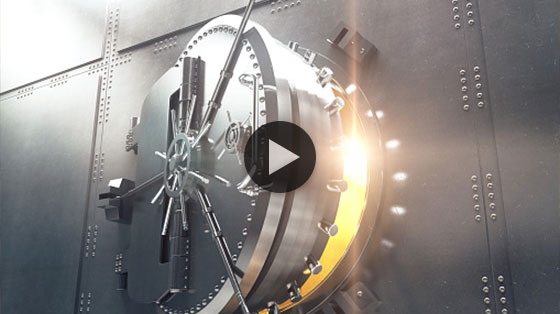