Now’s the time to buy gold…

Most of the time, gold is an atrocious investment.

It pays no dividend. It has limited industrial uses. And it can go through long stretches of time where its price goes nowhere.

But under certain conditions, gold prices soar. And along with them, certain gold stocks explode even higher.

Today, we’re seeing a similar setup in gold to the one during the financial crisis.

So for the first time in more than 20 years, I’m going back into the gold market… and buying sizable quantities of gold for my personal account.

In today’s essay, I’ll share with you why Teeka’s pounding the table on gold – and more specifically, gold stocks.

Last month, President Trump signed into law a $2 trillion stimulus package to rescue the U.S. economy from the coronavirus pandemic. And the Federal Reserve may print twice that much to revive the financial system.

That’s a total of over $7 trillion in direct and indirect stimulus.

They’re pumping new money into the global economy at an alarming rate – with no plans to remove it. And that’s the biggest danger.

As governments all around the globe add more and more paper money to the economy, each currency is worth less and less.

It’s simple supply and demand… the more you have of something, the less it’s worth.

Now, that’s where gold comes in…

You see, gold prices and gold stocks boom when central banks crank up their “printing presses.”

And it all has to do with something called real rates.

The real rate is the interest rate you receive on the 10-year government bond minus the current inflation rate. So if the bond pays 3% interest and inflation’s at 2%, it’d be 1%.

When real returns go negative (like they are now, globally), smart money flees bonds and paper money as they drop in value. Instead, they go for the protection of gold, which rises in value and offsets the losses from holding paper money.

Year-to-date, gold has gained nearly 9%, while major global currencies (excluding the U.S. dollar) have lost an average of nearly 8%.

When Gold Soars, Gold Stocks Do Even Better

As real rates have declined, gold prices have zoomed higher. Gold has risen as much as 26% since June 2019. 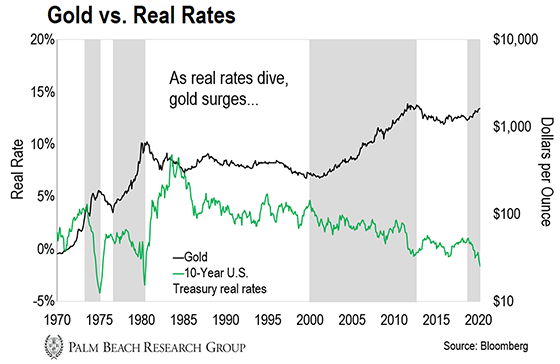 As you can see, it’s a pattern we’ve seen over the years…

So why do gold stocks perform so spectacularly during gold booms?

It all has to do with something called leverage.

That’s leverage at work. And that’s why high-quality mining stocks can skyrocket in a gold bull market.

The Perfect Setup for Gold Stocks

Remember, when the Fed and other central banks turn on their printing presses and real rates go negative… investors flee paper money and bonds… and flock to gold. And as gold surges, it’ll ignite a huge rally in gold stocks.

Teeka says this unique series of events doesn’t happen very often. But when it does, it can make you life-changing gains.

In our flagship Palm Beach Letter service, Teeka’s put together a report with three gold stocks he believes can go up 150–350% over the next 18 months. (Paid-up subscribers can read the issue here. If you’re not a subscriber, you can learn how to become one right here.)

If you want broad exposure to the next gold boom, consider the SPDR Gold Shares (GLD) exchange-traded fund. It’s tied to the price of gold and backed by gold secured in vaults around the world.