If you haven’t seen it before, it features aspiring entrepreneurs who make rapid-fire business pitches to a panel of celebrity investors—the “sharks.” Then, these sharks decide which ideas to invest in as business partners.

Now, who wouldn’t want to have their ideas heard by billionaires like Mark Cuban and Richard Branson… with the chance to make millions or billions with their backing?

Here’s the thing, though: At the Daily, we think you have a better shot at making life-changing gains by being a “shark” rather than the bait.

You see, for years, venture capitalists (VCs) like Cuban and Branson have made billions from “sweetheart deals” similar to the ones on Shark Tank.

But the real-life deals are much more profitable.

So today, I’ll tell you about the $5 trillion pool the real sharks swim in—and how ordinary investors like you can tap into this market, too…

According to McKinsey & Company, private markets have over $5 trillion in assets under management. And for decades, Wall Street fat cats and the financial elite have walled off this market from ordinary investors.

But the reason why isn’t surprising.

You see, the average VC firm doubles its money every 18 months on private deals. That would turn a $5,000 stake into more than $40,000 in less than five years… 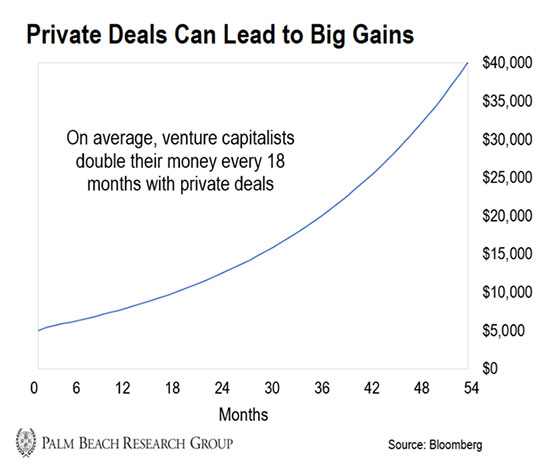 These are the types of deals Daily editor Teeka Tiwari calls asymmetric bets: They can turn small sums into large gains.

So you can see Wall Street has zero incentive to let Main Street partake in these private deals. But Teeka’s uncovered a “sweetheart deal” market that can make you life-changing gains.

It’s a legal loophole allowing non-accredited investors access to these private markets. And as Big T says, “It’s a loophole I’ve used to see gains as much as $1.6 million on just a $1,000 investment.”

As mentioned, Wall Street has no incentive to share it with you. In fact, until now, if you weren’t a millionaire, you couldn’t participate anyway. But that’s all changed…

Kicking Down the Door

In 2012, Congress passed the JOBS Act into law. However, it took the slow-moving bureaucracy six more years to adopt the final rules.

Among other things, the JOBS Act contained a provision allowing non-accredited investors (those with a net worth of less than $1 million) to get into deals like the sharks do.

This provision created Regulation A+ deals. And they’re a game changer…

Regulation A+ deals allow private companies to raise money from accredited and non-accredited investors. So these placements are now coming online.

Before last year, Wall Street and insiders had almost exclusive access to these deals. But now, Main Street can finally invest in private placements, too.

So the tables have turned: You can now become a shark.

Instead of pitching ideas to VCs and hoping for the best, you can choose which ideas you want to invest in…

We Can Help You Cash In

Look, investing in private deals can be very risky. Like any other investment, they could go to zero.

But remember, these are asymmetric bets. You don’t need to risk a lot to make a lot. You just need to put a few hundred dollars into each position and let time do the work. That’s how VCs make their money.

Now, you can’t just sit in front of your computer screen and type in stock tickers to find these deals. You need to interview executives… visit facilities… and dig into financial statements. Hedge funds charge millions of dollars for this type of research.

But Big T and I have been doing this for the past few months. In fact, he recently sent me to California to vet a private company in the burgeoning legal cannabis space.

It has dispensaries, cultivation areas, manufacturing abilities, and a delivery unit that covers almost half the state. And based on our research, we believe this company can multiply your money 40 times in the coming years.

Now, this is a limited venture, so I can’t reveal too many details. But you can learn more right here.

You must act soon, though. This opportunity closes tonight at midnight—so don’t delay.