If the first half of the year was like a hurricane in the markets, the second half will be like entering the back end of the storm.

The first six months of 2022 were like the first half of a hurricane when a sharp revaluation of stocks knocked the market down 18%.

We entered the eye of the storm with the market rallying 8% from its June low. That’s the good news.

The bad news is that when we exit the eye, we’ll likely be headed for the back half of the storm. That means more volatility ahead.

The second quarter earnings season began last Thursday. Over the next six weeks, thousands of companies will report how they fared between April and June 2022.

We expect this earnings season to trigger another storm in the market.

Many companies will use this period to lower earnings forecasts for the next 12 months. In other words, companies expect lower revenues and profits this year.

Despite the massive sell-off we’ve seen this year, the average S&P 500 forecasted earnings per share (EPS) has remained about the same – hovering around a blended average of $220 per company.

That alone has caused a sharp drop in the forward price-to-earnings multiple of the index – from 22.7 at the start of the year to its current level of 17.

[You calculate the forward price-to-earnings multiple by dividing a stock’s current share price by its forecasted earnings per share. This tells us how much investors are willing to pay for a share of a company’s future earnings. So a drop in forward P/E means decreased expectations in regard to future earnings.]

The following chart shows the separation between the S&P 500’s valuation and its forecasted EPS. Even though valuations have dropped, forecasted EPS has largely stayed the same. 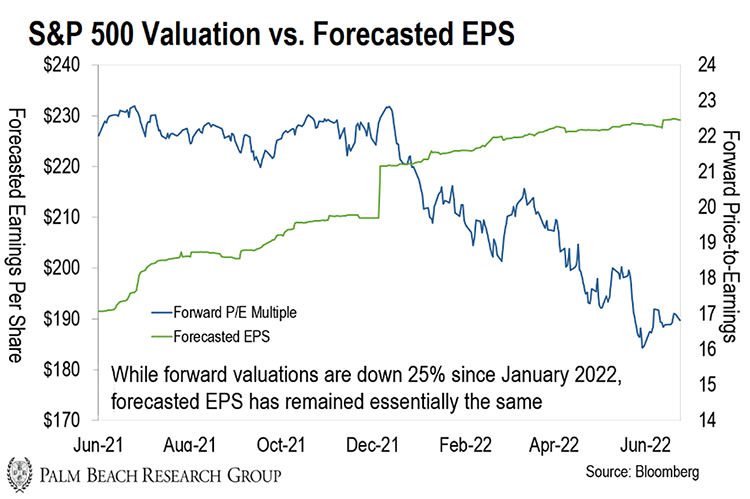 We’re Entering the Back Half of the Hurricane

We’re already in bear market territory. Yet the market hasn’t priced in lower earnings guidance yet. That suggests stocks have another leg to drop before they bottom out.

56% of earnings revisions were to the downside last month… That’s the highest rate since June 2020, when the pandemic caused earnings forecasts to collapse.

This is only the beginning. As inflation continues to soar and consumer spending decreases, the number of negative earnings revisions will continue to rise. That creates even more volatility…

So, what does that mean for your investment strategy in the near term?

I expect this to be a very weak earnings season.

And, you know, when friends and family ask me what they should be doing at a time like this, I say just raise cash and be patient, better prices will come.

However, if you’re sophisticated enough to sell cash covered puts, that’s the right track to take at this time. It’s my favorite method to raise cash and get the opportunity to buy dividend paying blue-chip stocks for really cheap valuations.

I think those are the stocks that can best handle the inflation we’re seeing today.

We’re not alone in our expectations.

According to a study by Absolute Strategy Research, only 37% of money managers expect earnings to be higher a year from now. That’s the lowest reading since late 2015. (These money managers collectively oversee $5.2 trillion in assets.)

There are several reasons why we’re forecasting a rough earnings season:

If EPS forecasts drop, share prices will also have to fall to maintain the same forward P/E multiple they currently sport.

According to investment bank Evercore, earnings during recessions have historically dropped about 15% on average. Should we see that play out now, that would drop the S&P 500’s forecasted EPS down to $194.

If the S&P 500 remains at the same valuation as it currently trades at, 17x forward P/E, that implies another 15% lower for the market.

So with that in mind, the next question is: Where can we find a meaningful return in today’s market and beat the S&P 500’s measly 9.5% annual average?

You Can Still Come Out on Top

Despite the volatility and uncertainty on the horizon, there are still opportunities for significant returns in today’s market… and a coming “Anomaly Window” will explode those returns even higher.

That’s because Anomaly Windows are brief periods in the market when the impossible becomes possible… and where the returns you can see from seemingly ordinary, boring, safe blue-chip stocks become life-changing.

In fact, Teeka’s been using a strategy that recently gave him an 82% annualized return on a billion-dollar blue-chip stock in just 14 trading days…

Put another way, it would take you between 17 and 22 years to achieve those returns using the S&P 500’s 9.5% annual average… but our subscribers saw them in a matter of months.

That’s why Teeka held a free online event last night where he broke down his Anomaly Window strategy… and showed thousands of online viewers how to use it to capture 21 years of market returns in 90 days or less.

Here’s the best thing about this strategy: It works under any market conditions.

So even if the market doesn’t drop as much as we expect, you can still use it to earn income from blue-chip stocks.

To learn how you can start using this strategy today, click here to watch a free replay of Teeka’s event.

You’ll even get Teeka’s free list of stocks to play this window, including his top 3. No strings attached. It’s worth watching just for those names.

Putting this strategy to use right now could see your investments soar hundreds to thousands of percent in just a few months.