“Sorry, mom. If I’d been able to predict this market meltdown, I would’ve made a few moves in your IRA.”

That’s what I recently said to my 74-year-old, widowed mother.

“The market will come back,” she responded.

Of course, we were talking about the impact of the coronavirus pandemic on global financial markets.

We’re in the midst of an exogenous shock, or black swan event – an unpredictable event from outside the economic system that can have severe consequences on the economy.

Wars, natural disasters, and pandemics like COVID-19 all fit the bill.

And they can cause extreme market volatility – like we’re seeing now.

Huge percentage moves in major indexes are almost a daily occurrence. For instance, the S&P 500 rallied 6% on Tuesday after closing nearly 3% down on Monday. And we’ve seen a lot of this over the last month.

But my mom’s response surprised me. With all the negativity going on, she quickly countered with positivity…

My mom is no financial pro. She doesn’t watch CNBC. And she rarely checks her brokerage account.

But from experience, she knows each time the market has suffered a drawdown, it’s come back even stronger.

The chart below shows the S&P 500’s drawdowns during all of the bear markets my mom has lived through: 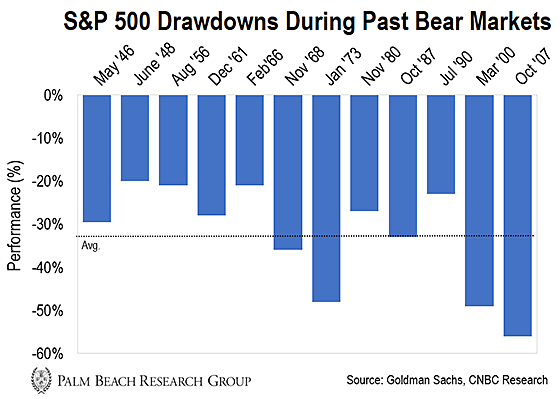 Since World War II, there have been a dozen bear markets. The average drop has been nearly 33%. On average, they lasted 14.5 months. And it took about two years for them to recover.

So my mom isn’t fixated on her brokerage account and doesn’t panic-sell. She knows that, if history is any guide, the market will rebound to new highs.

And it’s an important lesson for everyone else…

You see, investors who make emotional buy-and-sell decisions tend to suffer the most.

According to a Bank of America study on S&P 500 downturns going back to 1930, if an investor held steady through them all, they would’ve eventually made a 14,962% return.

However, if an investor missed the market’s 10 best days during each decade, the S&P 500 would’ve only returned them a measly 91%.

So at the end of the day, my mom is right. The best strategy is to have a plan… and stay invested. The market will recover again.

In the meantime, there are some other steps you can take to save money in these volatile times…

Find Other Ways to Cut Spending

The truth is, my mom’s situation isn’t terrible.

Her portfolio is more like 40/60 (40% stocks/60% bonds). But at her age, it makes more sense. She’s widowed… in her mid-70s… and still works. So this is the conservative model we decided worked best for her.

It still hurts. But it could be much worse.

So I told my mom not to make any wholesale changes. Instead, we raised a little extra cash and rebalanced back to her model allocation.

We also discussed some small steps she could take to save money. And they could help you out, too…

Rather than making rash decisions in your portfolio, think about what you can do to save more money.

You’ll see immediate benefits. And you’ll likely be better off in the long run.

P.S. If you want to keep some of your money outside of the equities markets, consider investing in the crypto space.

Daily editor Teeka Tiwari has uncovered five coins he believes can turn every $500 into $5 million. And because you just need tiny grubstakes to get started, you won’t risk your current livelihood.