This is one of the most exciting updates I’ve written in my nine years at Palm Beach Research Group.

[Company] is poised to go public shortly after the stock market opens this morning at 9:30 a.m. ET. Not only will [it] have its long-awaited IPO, but it’ll be on the second largest stock exchange in the world: Nasdaq.

Before we talk about the name of this company and the details round this historic IPO, a little backstory…

Longtime readers know Daily editor Teeka Tiwari and I travel the world to uncover the next massive, undeniable investment trend…

Then we position our readers in the best companies… And as these once-in-a-generation trends unfold, we cash in big.

One such megatrend we’ve covered extensively is legal cannabis… and as part of our research process, we often vet dozens of cannabis companies each month in an effort to separate the wheat from the chaff.

Of course, they attempt to regale us with sales growth figures, greenhouse specs, and growth opportunities… But back in January 2020, one particular company’s approach to the cannabis business intrigued us.

You see, the company was focused on profits… which is a rare find in the cannabis space. This caught our attention.

Many in the industry take a “grow at any cost” approach. But this company was focused on financial sustainability and product quality.

And after seeing the company’s grow operation firsthand (see the picture below)… and hearing its strategy to become the largest organic outdoor grow operation in the world… we recommended this Colombia-based pre-IPO cannabis company to our subscribers. 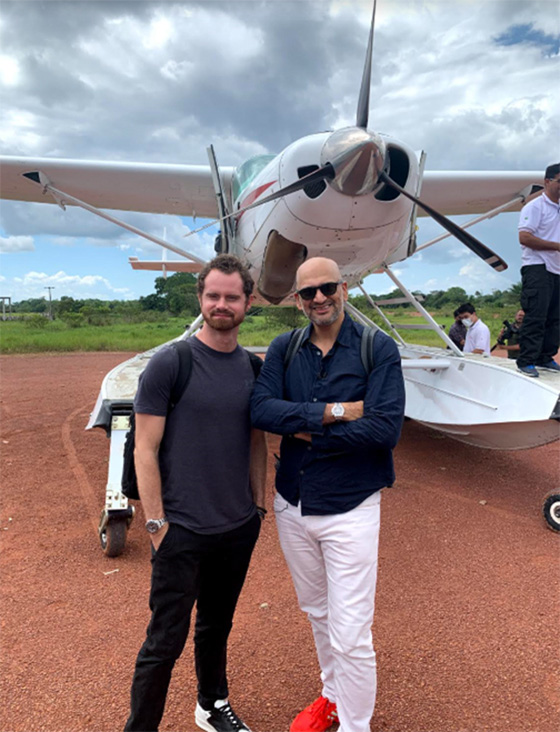 Fast forward to today… and we can see that all our due diligence paid off.

The same man behind this once-in-a-lifetime pre-IPO opportunity has another deal up his sleeve. And Big T and I believe it could even be bigger than his last one…

The venture capitalist (VC) who introduced us to this Colombian cannabis success story built his entire multibillion-dollar fortune off 11 private deals. He’s been so successful… insiders compare him to Elon Musk and Richard Branson.

And after spending the last two years tracking his movements, it’s not hard to see why…

Like us, this VC has a boots-on-the-ground approach. He travels directly to the companies and countries he’s interested in. He meets with local leaders, members of government, and key operational figures on the company level.

He employs an army of number crunchers and analysts to feed him real time data on the latest trends – all to position himself and his shareholders ahead of the next big trend.

But it wasn’t extreme due diligence tactics that won us over. It was his track record…

His first deal took a small internet service provider from a value of 8 cents per share to as high as $10. That’s 12,400% return on investment.

You probably already guessed what his 11th deal was…

Yes, the same Colombian cannabis success story we recommended to our subscribers that shocked the world when it debuted on Nasdaq in May.

So, it’s no surprise that when we caught wind of a 12th deal brewing, Big T and I took notice.

Here’s why this deal is so special…

That pre-IPO company went public on the New York Stock Exchange (NYSE). I’m talking about the Big Board…

The biggest exchange in the world…

The granddaddy of them all.

Now, if things go as planned, this very same insider plans to list deal No. 12 on the NYSE, too.

Some VCs go entire careers without finding a single pre-IPO deal that lists on the NYSE… and this venture capitalist could have found two.

And just like we found the first cannabis pre-IPO to list on the Nasdaq… Big T and I believe deal No. 12 could go public on the NYSE thanks to its industry… its scope… and the team behind it.

Here’s why that gets us excited: companies that list on the Big Board can see huge gains on IPO day:

That’s why tomorrow at 8 p.m. ET, Big T is holding an all-hands-on-deck emergency briefing for deal No. 12.

During this urgent buy alert, Teeka will reveal details about the man behind this deal. And now, you can take part in his 12th deal.

But it’s urgent you act now.

Big T’s last pre-IPO recommendation at an event like this filled up in less than 12 hours… And it’s possible this deal could fill up even faster.

So if you want in on deal No. 12 – and you want in before it lists on the NYSE… you must act now. It’s critical you make your move immediately.

That one took the investing world by surprise. But this time – there’s time to prepare.

This billionaire has proven time and again that he’s only interested in the best and most promising pre-IPO opportunities… the very same kind that Teeka and I travel the globe to bring to our subscribers.

And while I can’t get into more detail here, Teeka will break everything down for you tomorrow night.

Click here to reserve your spot for this FREE online event.

P.S. This pre-IPO deal is available on a first-come, first-served basis.

We’ve even put together some special bonuses as a thank you for those who join us.

You can learn more right here…