The Democratic-controlled House approved the measure last month. And in the Senate, 12 Republicans joined the opposition last Thursday to rebuke the president.

Trump wants to redirect nearly $6 billion in federal funds to a border wall. But lawmakers said he acted unconstitutionally by usurping Congress’ power of the purse.

Now, neither chamber has mustered the two-thirds majority support required to override the veto. And like other constitutional crises, we expect this wall debate to land in the Supreme Court.

The wall itself is pointless, though… Anyone wanting to get into the U.S. illegally can still go over, under, or around it.

We don’t know how this will all play out. But we do know this: There’s another wall the president is already building—and Democrats won’t be able to tear this one down…

President Trump signed the executive order declaring an emergency on the southern border on February 15, 2019.

But a few days earlier, he quietly signed another executive order declaring an even bigger emergency—one you probably didn’t hear about.

The president didn’t tweet about it… and the mainstream media didn’t blare it across headlines like they usually would.

But that’s why you turn to us at the Daily—because we’re always looking for opportunities that aren’t covered by everyone else. And Trump’s other “emergency” has money-making opportunity written all over it.

Dubbed the American AI Initiative, the plan essentially seeks to build a virtual “wall” around one of America’s most strategic locations—Silicon Valley.

According to geopolitical intelligence firm Stratfor’s 2019 forecast, one of the most significant strategic challenges facing the U.S. is China’s growing artificial intelligence (AI) capabilities.

Forget a trade war… Stratfor says the U.S. is preparing for a “tech war” with China:

Artificial intelligence will be a critical area of competition between the two countries [China and the United States] because it has applications in military as well as civilian life—and will likely revolutionize both.

Because of China’s sheer size, its tech sector could give Silicon Valley a run for its money in terms of market share if it even comes close to producing the same technologies.

Last year, the Defense Department announced the creation of the Joint Artificial Intelligence Center to do just that. Currently, the center is based at the Pentagon, but the military wants to open outposts in Silicon Valley, too.

This is all part of a long-term plan by the U.S. to “wall off” American AI tech from Chinese access.

The president is essentially building a virtual “wall” around Silicon Valley. And once you realize how critical AI will be to the U.S. economy and national security, you’ll see why it makes sense…

Global consulting firm PricewaterhouseCoopers estimates that AI could contribute up to $15.7 trillion to the global economy in 2030. That’s more than two-thirds of U.S. GDP—and nearly more than the current output of China and India, combined.

And the problem for Trump is that China’s catching up to the U.S. in this “tech war.”

But unlike the border wall, Trump has bipartisan support to protect Silicon Valley. Republicans and Democrats in Congress have been generally united in their desire to crack down on Chinese “theft” of American intellectual property.

That’s probably why you haven’t heard much about this virtual wall in the press… It’s not as controversial as the border wall, so the media are ignoring it.

But we’re on the case… because the president’s new order will make AI a priority for American businesses and channel billions of federal funds into the space.

The question now is: Where will the bulk of the funds go?

These Companies Will Benefit

Just like with the nuclear arms race before it, the first country to dominate the AI space will have huge commercial and military advantages over its rivals.

And the companies that stand to benefit most from President Trump’s AI initiative are the ones at the forefront of this technology: tech giants like Google, IBM, and Amazon. Another major player, Microsoft, recently signed a $480 million contract to build augmented reality tech for the U.S. Army.

There’s no easy way to play this trend—yet. I couldn’t find a single exchange-traded fund (ETF) that focuses solely on AI… But expect them to come to market in the near future.

Until then, if you want to play this trend, the companies mentioned above are a relatively low-risk way to add AI exposure to your portfolio.

P.S. As I said, there are few easy pure plays on AI technology. However, if you’re looking for companies with huge growth potential, we suggest you try PBRG friend Jeff Brown’s Exponential Tech Investor advisory. He’s identified the technological infrastructure the U.S. will need to dominate the AI field.

Regular readers know Jeff spent years in Silicon Valley and has an inside track on the biggest tech trends before they hit the front pages. He even pinpointed the top tech breakthroughs of 2016, 2017, and 2018.

In fact, in the February issue of Exponential Tech Investor, he recommended a small company making technology that’s critical to running AI software. And you can learn how to get your subscription here.

P.P.S. Do you think the virtual “wall” is a bigger priority than the border wall? Let us know right here…

From Robert D.: I don’t think we should raise the minimum wage to $15 in one fell swoop. That’s too much for a lot of companies to handle all at once. That kind of hike will be devastating for everyone involved, including low-wage workers.

From Carl S.: Raising the minimum wage in today’s labor market would only reward those who really don’t want to work. If the tax on labor was removed, it would reward those who do work with a substantial pay increase and give them an increase in purchasing power. That’s a win-win situation for everyone.

From Mitchell F.: Some sectors, such as medical practices, are unable to freely move the prices of their services due to fixed reimbursement rates by both government and private insurers. About half of my employees make $15 or more per hour. They’ve all been with me for at least five years. Most of them started at $10 an hour.

But if the minimum wage went to $15 for the entry level, then my staff would have to shrink by 20%. My loyal, long-term employees would see their hourly wages with lower caps. Medical practices have an increasing amount of taxes (franchise, property, sales/use, etc.) which have been put in place or have risen over the last five years—but reimbursement rates have not risen accordingly. I think jobs will be lost with a $15 per hour minimum wage.

From John O.: While free markets are the source of our great wealth, to be a profitable business, you must produce a good product at a good price. That means you must have the lowest-cost production.

This will happen through automation, which eliminates jobs and lowers wages. The catch is that mature economies in developed countries have become consumer economies… and consumers can’t consume without money. Today, that money isn’t coming from wages, but from government-printed paper.

That’s inflation, regardless of what the Consumer Price Index says. A higher minimum wage is not a long-term solution. For over 10,000 years, every empire has always failed because it did exactly what the U.S. global empire is doing today. If a person makes only a minimum wage, there will be no savings for basic needs and retirement… let alone the additional consumption of non-subsistence products and services.

What’s your take on the minimum wage debate? Send your thoughts to us right here…

If he were still running his hedge fund, it would be the No. 1 strategy he’d use to help his clients grow their wealth right now. And if you act quickly, it could change your life… 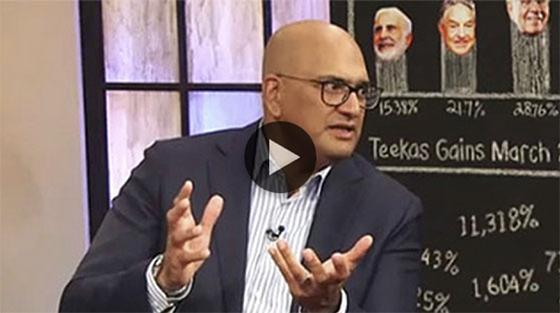