This may be the most shocking chart you’ll see this year.

Over the past two decades, nearly half of the publicly traded companies in the U.S. have vanished… 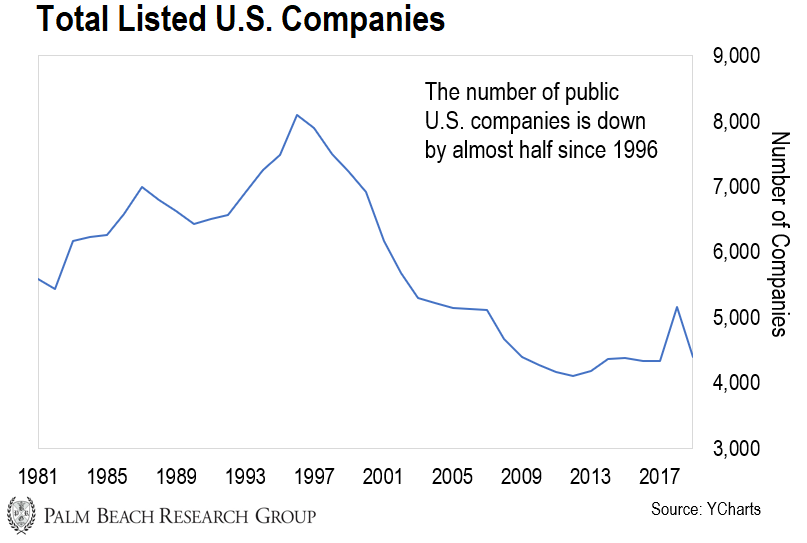 But it’s not just the World Bank seeing this…

This trend isn’t set to reverse, either. Global consulting firm McKinsey & Company projects 75% of S&P 500 companies will disappear over the next decade.

So what’s causing so many U.S. companies to disappear?

Today, I’ll tell you what’s behind the demise of the publicly listed company – and more importantly, how you can profit from it.

As you can see in the chart below, in 2018, the average company stayed private for 13 years – over three times longer than in 1999. 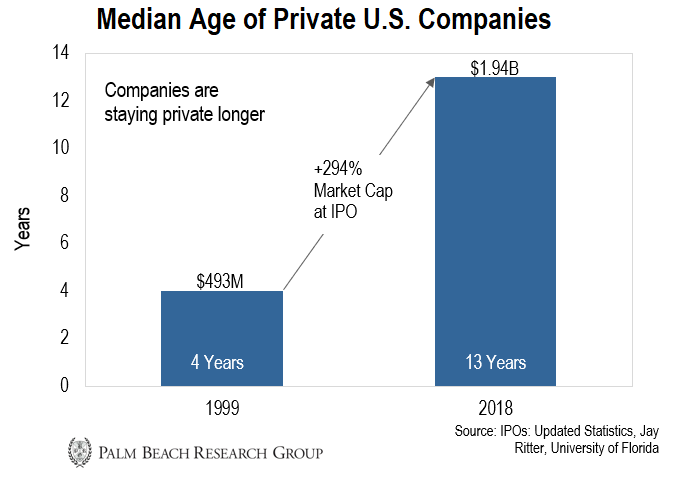 The main reason companies are staying private longer is because it’s more profitable for them. And when they eventually go public, they’ll do so at much higher valuations.

For mom-and-pop investors, it’s a double whammy. There are fewer public companies to choose from (meaning fewer opportunities to make profits). And buyers pay a lot more for companies when they go public.

But at the Daily, we show you how to turn the tables on Wall Street’s elite…

So if you really want to build your wealth, you’ll need to consider investing in private equity. But until recently, the elite walled off this $5 trillion market from ordinary investors.

Today, that’s all changed. And I’ll show you how anyone with $500 – or less in some cases – can get into this growing market…

Invest in This Growing Market

According to McKinsey & Company, the private market has over $5 trillion in assets under management. So private companies can easily raise capital without going public.

And it’s paid off…

And now, new rules from the Securities and Exchange Commission allow ordinary investors to get in the game and invest in private companies before they go public…

Here’s what Daily editor Teeka Tiwari recently had to say about private deals:

Now, you can search for private deals yourself on crowdfunding platforms like SeedInvest and MicroVentures. They list dozens of startup companies raising money from the general public.

For massive gains, it’s essential to have an allocation to the private markets. So consider creating your own portfolio of 10–12 startups. You just need one of them to hit it big to make life-changing gains.

But remember, this asset class comes with risk. So a small grubstake is enough. We recommend a total allocation of up to 5% for private markets.

P.S. Teeka’s personally amassed a fortune with just this one type of investment. And he believes that almost anyone can do the same.

Now that it’s legal, the time could not be better to learn how you can get started with something that used to be set aside for Wall Street insiders.

And Teeka’s already found a sweetheart deal for the public. He’s put the details in a special report called, The Next Monster.

And right now, you can buy shares for pennies. But don’t delay. Learn how you can get your copy right here.