And you thought the blockchain was just about cryptocurrencies…

Take a look at the infographic below. It’s from technology research firms Frost & Sullivan and Outlier Ventures. In 2016, investment in blockchain startups reached a record $500 million. The total investment to date is about $1.5 billion. And there’s plenty of room to go.

Blockchain technology is still in its early phases. But now we’re seeing a shift away from cryptocurrencies and into other industries… especially finance.

Today, 28 of the world’s top 30 banks are working on blockchain technology. Those include Citi, Wells Fargo, and Deutsche Bank.

Regular Daily readers know we’re bullish on the blockchain. But many readers still think it’s all about cryptocurrencies.

As the chart above shows, that’s no longer the case.

In the past, you’d have to be a Wall Street or Silicon Valley insider to get in on companies like those in the chart above.

They’re not publicly traded. And if you’re not part of a big hedge fund or an accredited investor with $1 million in net assets, you’re out of luck.

In a moment, I’ll show you how you can buy these shares. First, let me explain how these shares work. (For regular Daily readers, consider this a refresher course.)

As we’ve written in the past, each blockchain runs on its own cryptocurrency… These currencies are basically just programming code.

People used the first cryptocurrencies to pay for things online.

But as blockchain technology has evolved, we’ve seen an emergence of crypto-equities.

A common term for these crypto-equities is “app coin.” (You may see them also referred to as “alt coins,” “crypto-tokens,” or “digital tokens.”)

No matter what you call them, they’re basically “digital shares” in a blockchain company. And these shares can be bought and sold on cryptocurrency exchanges.

Think of it this way…

Digital money is like the U.S. dollar or gold. You can spend digital money or use it as a store of value.

Digital shares are like stocks in a company. You can buy, sell, or trade them on an exchange just like you can with shares in Amazon or Walmart.

The Simplest Way to Buy Into the Blockchain

Unlike most startups that require you to be an accredited investor with at least $1 million in net assets… anyone can buy “shares” in a blockchain startup. All you have to do is buy its cryptocurrency.

In November, we purchased a blockchain app coin (this one’s a gaming app) for a few bucks. It’s now up 286%.

If you want to test the waters on blockchain investing, here are three app coins on my radar right now (we haven’t fully researched them yet, so do your due diligence):

(These companies are not publicly traded. So you cannot buy them in your brokerage account. You can only buy them on a cryptocurrency exchange.)

If you want to get broader exposure to the burgeoning blockchain bull market, the simplest way would be to buy a small amount of bitcoin.

Many new blockchain applications base their network on the bitcoin blockchain. And most app coins can only be purchased with bitcoin.

We recommend you use the Abra exchange to buy bitcoin. You can watch my free instructional video to learn how to set up your own account. If you’d like to do a bit more research on app coins before you buy, check out this free primer.

P.S. Palm Beach Letter editor Teeka Tiwari and I have researched dozens of cryptocurrencies… including many on the infographic we published above. One of our four crypto plays is already up nearly 480% in less than a year. And the “worst performer” is “only” up 53.9%. All you need to get started in this crypto bull market is $40 and the right account.

Editor’s Note: Global trade has been a key theme in the Daily this year. As regular readers know, one of President Trump’s goals is to reduce America’s trade deficit. So for today’s special Chart Watch, we turn to Bill Bonner Letter contributing editor Dan Denning, an influential global market analyst and author of The Bull Hunter. He explains why a strong dollar is standing in Trump’s way.

Stocks are strong. The U.S. dollar is even stronger.

A serious examination of the nature of money is probably the last thing on your mind.

But check out today’s chart… It’s of the Trade-Weighted U.S. Dollar Index. This tracks the strength of the buck versus a basket of six major trading-partner currencies.

As you can see, it’s threatening to break out to levels it hasn’t seen in almost 15 years.

And it reveals exactly why President Trump and Fed chief Janet Yellen are on a collision course.

You see, dollar strength is a BIG problem for Trump…

A weaker greenback will make U.S. exports less expensive overseas and make imports pricier for Americans. That will help tip the balance of trade back to surplus (or at least not at such a large deficit).

But Fed rate hikes will NOT weaken the dollar.

That makes the dollar stronger—exactly what the president doesn’t want.

Longtime PBRG friend Bill Bonner is betting $5 million of his family trust’s money on this former corporate banker. Why?

Against even the best investors in the world, his performance has been remarkable. Click here or the table below to learn more about why Bill chose this man to create an elite portfolio for his family… But you must act quickly. This opportunity closes tonight… 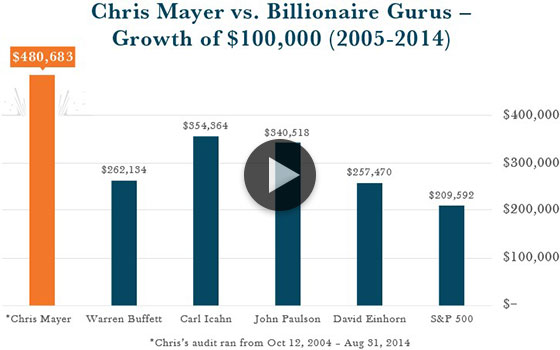