That was the last time the Federal Reserve raised the Fed Funds Rate 75 basis points. And what did it end up doing after that? Seven months later, it ended up cutting rates again.

Put simply, the Fed is crashing the markets and asset prices, and its policies will not address inflation.

The reality is that the “real” inflation is much higher than what is represented by the Consumer Price Index (CPI) of 8.6%.

By way of example, if we calculate the CPI the way it was back in 1980 – without assumptions and adjustments for product substitutions – we see a very different picture… 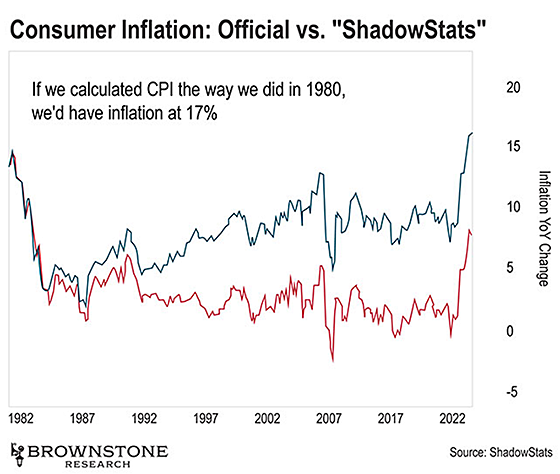 Using these alternative CPI calculations, inflation currently sits around 17%… and the interesting thing is that this feels far more accurate.

Have the prices of chicken, eggs, gasoline, electricity, bacon, and just about everything else risen more than 8.6%?

They have… and in most cases, those prices are up by more than 17% year-over-year.

Raising the Fed Funds rate 75 basis points to 1.5% won’t do anything to tame the kind of real inflation that we are seeing right now. The Fed missed its chance to address this problem last year. Now inflation is out of control.

If it were serious about addressing inflation, the Fed would raise the Fed Funds rate to 9% in one fell swoop… But it can’t do that. It would collapse the entire economy. It simply isn’t an option.

What the Fed is doing now is its version of virtue signaling. It just wants to appear to be making an effort.

And our portfolios have been hurting as a result.

It’s enough to make you want to sit out this current volatility… and wait for better times.

And it’s a big reason my team and I are leaning towards less volatile investments… ideas that have some safety built-in and aren’t buffeted by the wild volatility swings we see today.

In our search for safer ways to invest and profit in today’s markets, my team and I discovered a special opportunity… one with a potential for incredible gains that lets us invest safely in the most exciting tech startups.

It’s a type of investment deal enabling the most exciting technological trends to reach mass adoption.

Yet if you’ve seen the media talk about these deals, they’ve been using words like “dangerous” or “complicated”… That’s hardly what we like to hear about our investments.

One billionaire money manager even called these deals “reprehensible.” What he won’t tell us is that he used one of them to turn $12.5 million into $275 million.

And he’s not the only one taking part… hedge funds, elected officials in Congress, billionaires, and even a president of the United States have gotten involved with these deals. Many have billion-dollar stakes.

Yet Congress is actively looking to make it harder – if not impossible – for regular investors to participate. It’s introducing legislation and regulations that could restrict these deals to just accredited investors.

But despite the dire headlines, these deals are not something to dismiss. They are as easy to buy as a stock… and critically, they provide contractual obligations that protect our invested capital.

Our elected officials, hedge funds, and the wealthy are all taking advantage of them… And they’re all making thousands of dollars in the process.

However, they’re also actively trying to keep these opportunities for themselves.

That means there is little time to waste… and it’s why I’ve prepared a very thorough briefing to show how you can benefit from them.

Tonight at 8 p.m. ET, I’m hosting an event called Mandated Money because we are “mandated” to make money with a number of these deals.

So please go right here to put your name down for tonight’s event.

With inflation soaring and volatility churning, I truly believe this is the smartest move investors can make today… And I don’t want any of you to miss out.

I’ll look forward to seeing you there.