Warren Buffett is probably the world’s most famous investor. Almost everyone knows his name.

But today, there’s a man listed right behind Buffett on the Forbes 400 Richest Americans list in the finance and investments category.

You’ve probably never heard of him. In 1968, when he was a math professor at Stony Brook University, no one had any idea of what he’d become.

Yet one of his investment funds routinely crushes Buffett – generating average returns of 71.8% between 1994 and 2014. That’s enough to almost double your money every year and triple your money in two years.

He’s not alone. A small cadre of former educators is routinely kicking the butts of Buffett, Carl Icahn, Goldman Sachs, and everyone else I know of on Wall Street.

They don’t have backgrounds in finance… They don’t have economics degrees… And they probably couldn’t make an investment banking deal to save their lives.

They’re more likely to have PhDs in advanced mathematics and rocket science… or backgrounds in statistics, physics, code-breaking, and speech recognition technology.

We call them “quants.”

Revenge of the “Nerds”

Quantitative trading uses strategies based on quantitative analysis. That’s just a fancy way of saying it relies on math and number crunching to identify trading opportunities.

The really special thing about quants is their ability to use decades of data analysis to predict which stocks will move up and down with startling accuracy.

This secret sauce has allowed the quants to generate hundreds of billions of dollars, whether stocks are going up, down, or sideways.

As of March this year, the majority of the top-earning hedge fund managers are at quant firms.

One of the most successful is Jim Simons, founder of Renaissance Technologies, which generated $1.6 billion in 2017… making it the top-earning hedge fund in the country.

He received his math degree from MIT in 1958 and his PhD from Berkeley in 1961. He even spent time as a codebreaker for the NSA.

After spending a decade teaching math at Stony Brook, he founded RenTech as a private hedge fund in 1982. No one else in the world as far as I know comes close to matching the returns of his Medallion Fund over the past three decades.

According to Forbes, Simons is second behind Buffett among American billionaires in the finance and investments category.

And it’s no surprise why… 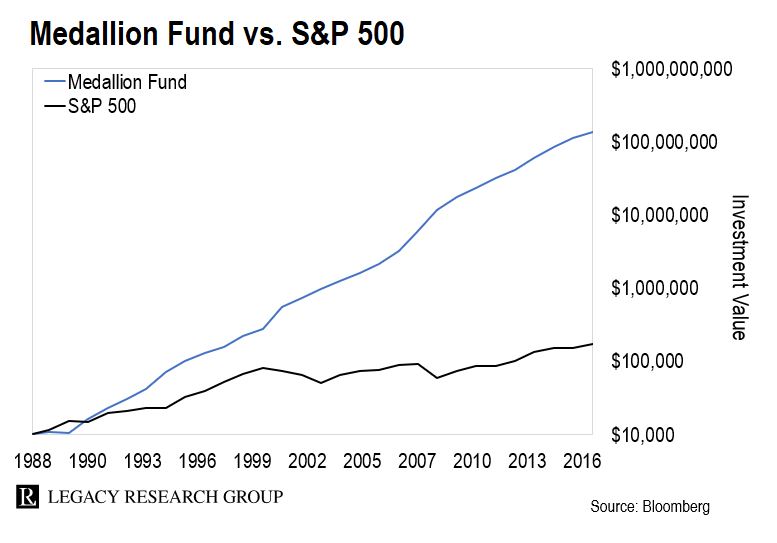 And it’s not the only quant fund outperforming…

According to The Wall Street Journal, quant firms like PDT Partners, WorldQuant, and Two Sigma Investments also operate multibillion-dollar funds. And these computer-driven funds have generated market-beating returns for years, too.

But there’s a catch. These funds are generally available only to employees, early clients, and a few lucky others.

Normally, at this point in an essay like this, I’d recommend a way you could get in on a trend like this.

After all, that’s why I write newsletters – to help you benefit from credible alternative investments usually unknown to the general investing public.

I’ve managed to do this with cryptos and private equity… and I’ve even found a way to invest in the hottest pre-IPO Silicon Valley deals on better terms than many venture capital funds.

But finding a way into the world of quant funds has been a tough nut to crack.

You see, unless you’re already outlandishly rich or a deeply connected Wall Street insider, there’s no credible option for the everyday investor.

Sure, there are a ton of small funds claiming they can do what Jim Simons does… But under closer scrutiny, those claims shrivel up like a day-old hot dog under a heat lamp.

I wasn’t going to let that stop me, though.

So two years ago, I presented my team with an unusual challenge: I asked them to help me find a way to replicate the most lucrative quant trading strategies.

Now, I admit I am not an expert at everything. But I am really good at making contact with people who are experts. And then using the knowledge and insights I gain from them to open my subscribers up to extraordinary opportunities.

And thanks to an exclusive contact who has been in the quant investing space for close to 40 years – using a quantitative system engineered by a Lockheed aerospace engineer – I’ve found a way for my subscribers to profit from Wall Street’s greatest secret.

We’ve spent roughly two years vetting the expert behind it, along with his system. And over the past four months, I took some of my own money out of cryptos and committed it to testing his program.

I asked my team to help me test this idea as well. This test was made up of real people with real money on the line.

And tonight at 8 p.m. ET, I’ll reveal this quant and his system to the entire world. And I’m inviting you to join me for this exclusive event.

So if you have 12 seconds to make a simple move that can make you $12,000 per month or more, then click here to sign up for VIP access to tonight’s event.

So come join me and learn all about how you can use these math-based systems to make $12,000 per month or more in pure spendable (or savable) profits.

P.S. And as a bonus for joining me – and to prove how effective my new system is – I’m willing to give everyone who attends my special event their first trade recommendation for free.