There’s a painful reality every investor eventually faces… paying taxes on their profits to Uncle Sam.

In fact, Washington wants that money so badly… the IRS added a brand-new line to the 2020 IRS Form 1040…

It asks a simple, but loaded, question:

At any time during 2020, did you receive, sell, send, exchange, or otherwise acquire any financial interest in any virtual currency?

And he expects a serious payday from those investor gains.

Unfortunately, there’s no easy way to avoid paying for profits you’ve already racked up… But there IS a way for you to legally avoid any tax liability on your future crypto profits.

It’s a unique way to render that new question on the 1040 irrelevant.

It’s a “loophole” used by the super-rich for years… I know multiple hedge fund managers, financial advisors, and crypto aces that are already using this tax-advantaged method.

But the average American doesn’t even know it exists…

Here’s how powerful this loophole is…

According to a recent report by ProPublica, PayPal founder Peter Thiel used it to turn a tiny grubstake of $1,664 in 1997 into a $5 billion fortune today.

And when Thiel decides to retire, he’ll be able to withdraw as much of that money as he wants without owing any tax at all.

Under current federal tax law, Thiel could owe as much as 37% of that $5 billion to the government. Instead, he’ll likely keep the extra $1.85 billion for himself.

Thiel isn’t the only wealthy American benefitting from this loophole… Even Warren Buffett, who frequently argues for higher taxes on the rich, had more than $20 million in it.

Of course, 99% of people won’t ever see the types of returns made by Thiel or Buffett. But with crypto, you don’t need a be a billionaire to 10x, 100x, even 1,000x your money. Just a tiny grubstake is enough to make a small fortune.

That’s why you want to consider this loophole. It could help you protect your crypto profits.

The loophole I’m talking about is commonly called a self-directed IRA (SDIRA).

An SDIRA lets you invest in the type of asymmetric ideas we recommend at PBRG – like cryptos, startups, and private real estate plays – while minimizing or even eliminating the tax burden on their gains.

And based on our research, we estimate less than 1% of all IRAs in the U.S. are this special type.

Note: The above information is for general tax purposes only and doesn’t cover every aspect of IRAs. We encourage you to consult with an accountant or tax adviser regarding your specific financial situation.

SDIRAs are similar to other IRAs. You can have a traditional SDIRA, Roth SDIRA, etc. The main difference is SDIRAs aren’t held at regular brokerage accounts.

In Thiel’s case, he’s using this loophole to save a fortune in future taxes on the profits he’s made from his private PayPal shares.

Here’s how he did it…

So his contributions and earnings will never be taxed again (assuming he meets the basic guidelines).

The chart below tells the whole story… 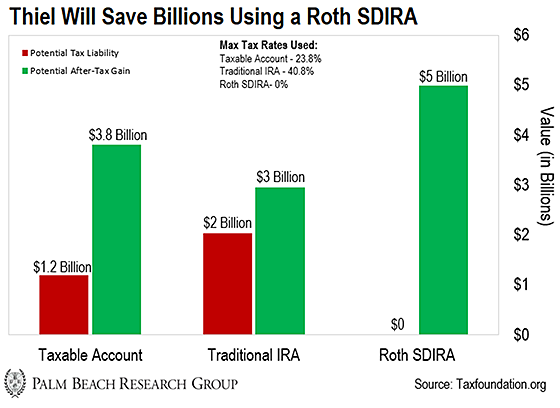 Under current federal tax law, Thiel could owe as much as 37% of that $5 billion to Uncle Sam. Instead, he’ll keep the extra $1.85 billion for himself by using a Roth SDIRA.

But if we simply take the top long-term capital gains and ordinary income rates… the federal tax savings are incredible.

And you can take advantage of it, too, by putting your bitcoin in an SDIRA.

This way, you can benefit from bitcoin’s rising price and the tax benefits of an SDIRA. In one case, you can even earn interest on specific crypto assets.

Another investor was a NASA rocket scientist. He had retired but took such a hit in 2008 that he was forced to go back to work. Since opening a bitcoin SDIRA, his account is up more than 44 times. And he’s since retired again.

When you combine the ability to earn steady income… crypto’s capital appreciation potential… plus the tax protection of an SDIRA… you have what Daily editor Teeka Tiwari calls the “holy trinity” of retirement planning.

Remember, this information is for general tax purposes only. Before you make any decision about your retirement planning, please consult your accountant or a tax professional.

But if you want to really move the needle on your net worth and accelerate your wealth-building journey, consider opening an SDIRA and funding it with bitcoin.

P.S. Right now is a perfect time to consider an SDIRA. And that’s because Teeka has uncovered six tiny cryptos he believes will see massive gains in the months ahead.

He calls them “Catch-Up Coins.” And that’s because one Catch-Up Coin alone can represent an entire lifetime of wealth creation.

Right now, Teeka says an unprecedented event in the crypto market will trigger a Hyper Boom in these Catch-Up Coins. You can get all the details right here…

You’ll also get the name of Teeka’s No. 1 Catch-Up Coin for free, just for watching.

When he’s given away the name of his top coins in past events like this, you could’ve made an average of more than 17x your money. So click here to get the name of his No. 1 Catch-up Coin.