If you’ve been following the stock market for the past four months, you know it’s totally disconnected from reality.

Today, the U.S. economy is reeling from a surge in coronavirus cases. Major outbreaks in Florida, Texas, Arizona, and other states may force another nationwide shutdown.

More than 50 million people are out of work… Over 100,000 businesses are closing or going into bankruptcy… National GDP shrank by nearly 5% in the first quarter alone… And some economists project yearly GDP may fall by as much as 40%.

But despite the economic carnage on Main Street, the S&P 500 is just around its all-time high. And it continues to climb higher.

I haven’t seen this type of disconnect since late 1999… when blue-chip stocks like AOL and Yahoo were trading at outrageous valuations.

AOL had a price-to-earnings multiple of 700, which means investors were paying $700 for just $1 of the company’s earnings. Yahoo’s price-to-sales ratio was 103, meaning investors paid $103 for $1 of its sales.

While I’m not looking for a long-term bear market like we saw back then, I do believe the market will need to correct at some point for valuations to catch up to reality.

So what’s behind this disconnect?

Since the 2008 Great Recession, central banks have injected $11 trillion of liquidity into the global economy through money-printing (euphemistically called quantitative easing, or QE). 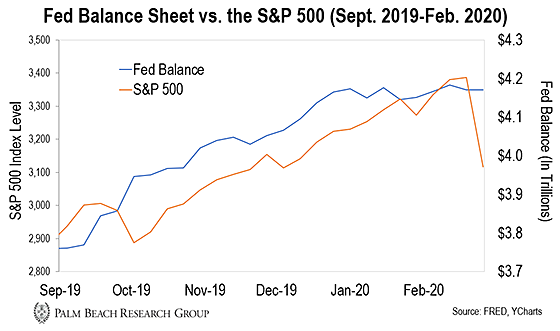 But central bank spending has accelerated since the pandemic rocked the global economy, triggering a market crash in March.

Since then, the Fed has pumped an additional $3 trillion into the economy. And the market has rallied 44% off its March lows… 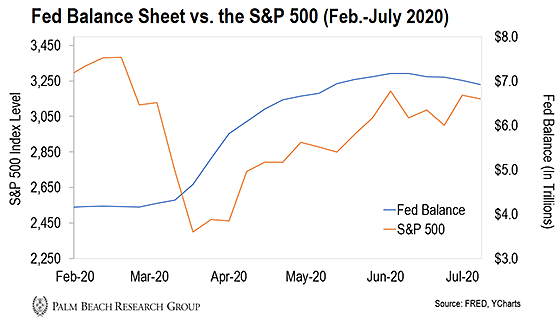 My team estimates the governments of the United States, Europe, and China will spend nearly $6 trillion combined in stimulus money to rescue the global economy. That’s a very conservative estimate.

According to global research firm Capital Economics, the Fed’s balance sheet alone could swell to as much as $10 trillion over the next few months.

Look, I’m no fan of money-printing. But I also learned a long time ago to never fight the Fed… It’s proven it’ll continue to do whatever it takes to prop up the stock market.

So instead of fighting the Fed, I look for ways to benefit from its policies. And the best way to take advantage of its crazy money-printing (and the inflation it brings) is to buy high-quality, dividend-paying stocks, gold, and bitcoin.

Why Am I Still Long-Term Bullish?

If you’ve been following me, you know I’m bullish on stocks…

Back in 2014, I told a group of investors a rare event would kick off a massive run for the ages.

I had a lot of skeptics at the time. Since making what was an outlandish prediction at the time, the market is up nearly 83%.

My research suggests stocks will continue to rise until 2028. But they wont rise in a straight line.

Make no mistake… right now, stocks are expensive. I have no doubt the market will correct again. But what will look like a total collapse will actually be a massive buying opportunity in disguise.

The key is to be ready…

Now is the time to put together your stock shopping list. When the next sell-off comes (and it will), you’ll want to be very clear about what you want to own… and the prices you’re willing to pay.

This is what I mean when I say: Let the game come to you. The time to prepare for the next big buying opportunity is now… not in the midst of a 20–40% market drop.

If you can get clear on what you want to own and the price you want to pay, you’ll be miles ahead of the competition when the next sell-off hits.

So in closing… We’ll see another nasty sell-off. But so long as the Fed keeps printing money and the federal government keeps providing handouts, the stock market will quickly recover from even the most violent of sell-offs.

P.S. There’s one sector I believe everyone should consider buying right now: Blockchain technology. In fact, I believe it’ll be the best-performing investment idea of the decade.

Not only is it the backbone of bitcoin, it’s also disrupting industries from finance to supply chains to health care. And many companies are turning to blockchain tech to help them through the pandemic.

In fact, I’ve put together a special presentation to pull back the curtain on this trend. I firmly believe it will be the No. 1 investment of the 2020s…