Most Americans scrimp and save an entire lifetime and barely have anything to show for it.

Maybe they own a house.

If they’re lucky, they also have a small nest egg.

And if they’ve followed the standard Wall Street advice…

Then they might have earned as much as 9.3% per year in their 401(k). (And that’s not even considering that Wall Street only recommends allocating 60% of your portfolio in stocks.)

But it’s not how I define success at Palm Beach Research Group.

It doesn’t help you make up for lost time, market crashes, and just plain bad luck…

And in a world where inflation is running at 6.2% per year, you’re barely breaking even.

Last year, I closed 2020 with a tracked annual gain of 53.5% in my flagship Palm Beach Letter.

That’s the kind of outperformance most professional money managers only dream of.

The very best might accomplish it once or twice in their careers.

Yet I made a bold claim to my subscribers and told them I would aim to do even better in 2021.

How We Stack Up Against the Best Investors in the World

My portfolio is once again crushing the stock market – producing a tracked return of 57.9% through November 15.

Since I took over this newsletter back in June of 2016, my recommendations have produced an average return of 618.3%.

That’s how you make up for lost time, market crashes, and bad luck.

To give you some more perspective on our performance this year…

Peter Lynch, one of the most famous fund managers of all time, ran the Magellan Fund from 1977 through 1990… beating 99% of his competition.

His average annual return over those years? 29.7%.

And what about Warren Buffett, widely considered the greatest investor of all time?

After running Berkshire Hathaway for 55 years, his average annual return is only 20% per year.

So, we’ve outperformed all those legends just this year alone and have done many, many times better since I took over this newsletter less than six years ago. 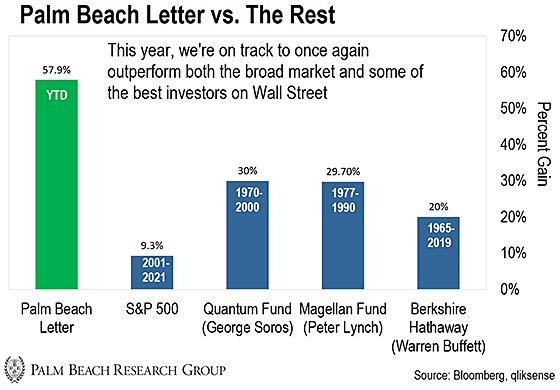 But as longtime subscribers know, this isn’t luck or a fluke…

It’s all thanks to our recipe at PBRG: Asset allocation and asymmetric risk.

The first part of our formula is asset allocation. It’s simply a way to diversify your portfolio across different assets to maximize returns and minimize risk.

When I took over the Palm Beach Letter in June 2016… I overhauled its asset allocation model to include more alternative ideas.

The first was probably the most controversial: bitcoin.

At the time, mainstream financial advisors avoided bitcoin like the plague. They didn’t understand this new asset class. And they feared what they didn’t know.

But I had done the research.

I knew bitcoin’s underlying blockchain technology would be revolutionary. And I predicted adding bitcoin would boost overall performance while lowering risk.

But the overhaul didn’t stop there. I added other alternative ideas like pre-IPOs and “Collectibles,” and expanded our asset allocation to nine different areas of the market.

This approach has resulted in a broadly diversified model with higher return potential and lower risk. That means when the market rallies, we rally much higher. And when the market drops, we drop far less.

In the first part of our formula, we create a diversified portfolio of assets that can generate multiple income streams.

In the second part, we put a portion of that safe income into “asymmetric” risk investing.

The average investor often can’t bank more than the 10% average annual return on the S&P 500… if they’re lucky.

According to J.P. Morgan, retail investors made a meager 2.9% return per year over the last two decades.

When you invest like this, you’re risking way more than what you’re potentially getting in return.

What we do is something very different. We put our subscribers in the position to harness the effects of positive asymmetric risk.

This approach allows you to turn tiny grubstakes into life-changing gains without putting your current lifestyle at risk… And it’s possible because of the first part of our formula.

So even if you blow all your safe income in one year on risky asymmetric bets… your diversified portfolio will replenish 100% of that safe income the next year.

Here’s to Another Winning Year

I can’t even guess how much someone might pay to not only crush the S&P 500… but also trounce the peak performances of Peter Lynch, George Soros, and Warren Buffett.

We didn’t do it with meme stocks, or the next “hot tip.” I didn’t reserve my best ideas for myself or the already rich. And I didn’t charge outrageous management fees.

What’s more, this performance wasn’t a fluke… Overall, our average return has been 618.3% since I took over PBL back in 2016.

And although I can’t guarantee the same type of success in the future… I can promise I’ll never stop trying to do even better than we’ve done already.

So let’s celebrate our performance this year. It was truly extraordinary. And if you’ve been making serious money from my recommendations, please let me know right here.

Until then, thank you for continuing to believe in me. Nothing makes me happier than helping you achieve your dreams.

P.S. In tomorrow’s Daily, I’ll go over my three big investment ideas of 2022.

But if you want to get a head start, you can watch my recent presentation on the biggest catalysts I see ahead for crypto next year.