The 2019 initial public offering (IPO) frenzy is upon us…

Lyft’s $2.3 billion IPO on March 29 was the first of numerous high-profile public offerings launching this year.

And Uber—Lyft’s top competitor—debuted its own IPO on May 10. Uber was valued as high as $75.7 billion at one point.

Collectively, the 2019 IPO boom is expected to set the record for total capital raised by U.S. IPOs in a single year… 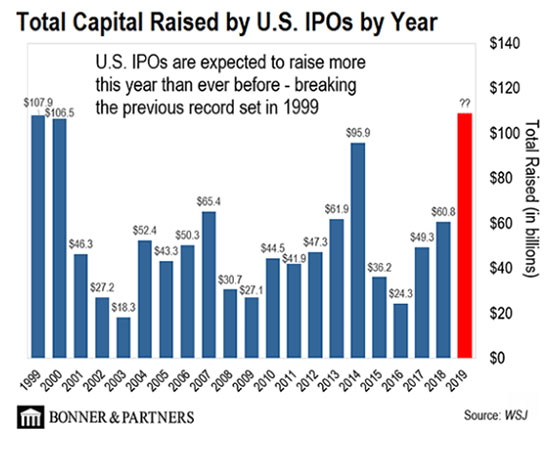 But there’s a big difference between today and 1999…

Back then, companies went public with little more than a business plan and a “dot-com” in their name. The median age was four years old. And median sales were $12 million per year.

Today’s companies are bigger and older. The median age is 12 years old… and median sales are $174 million.

Now, you may be wondering, “Why are today’s companies so much more established when they IPO?”

Over the last 10 years, we’ve seen a flood of venture capital flow into private tech companies. The chart below gives you an idea… 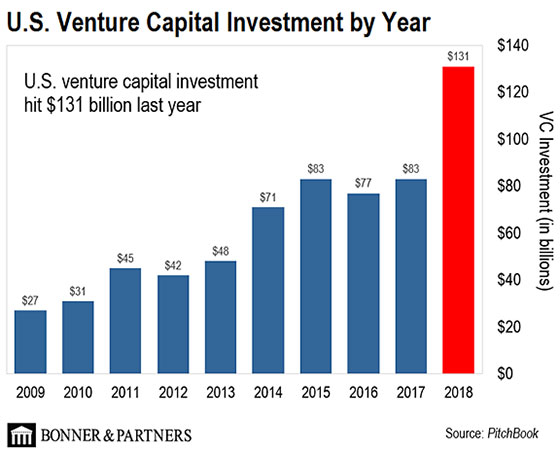 With that much private capital to access, why would a company go public? It could simply remain private and raise round after round of private funding.

This flood of capital has distorted the public markets. Technology companies have been choosing to stay private much longer than ever before.

As an example, look at workplace productivity company Slack.

Slack has had 10 discreet rounds of venture capital funding. It’s now valued at $16.7 billion—up from roughly $5 million when the company was founded in 2009.

That’s incredible growth for a private company. There used to be two or three venture capital funding rounds—before going public at a much earlier stage.

Slack, by the way, is expected to hold its own IPO around June 20.

But before you rush out to buy shares, there’s something you need to know…

Unlike Uber and Lyft, Slack isn’t having a traditional IPO. Instead, it’s doing a direct listing—like Spotify did last year.

This process helps to determine the share price at the IPO. Then, the banks collect roughly 7% of the total sale for their work.

Depending on the size of the IPO, that can be an obscene amount of money. It’s very lucrative for the investment banks—but very costly for the company going public.

A direct listing eliminates this entire process: The company just lists its existing shares for trading.

A direct listing puts those shares on a public exchange. Just like a normal stock market, stakeholders who have shares can hold or sell them.

And Slack is a fantastic company. In fact, it’s one of the best software-as-a-service (SaaS) companies ever.

But here’s the thing you need to know about Slack: Its valuation is astronomical.

At writing, Slack has an enterprise value-to-sales (EV/sales) ratio of 40. That’s off the map.

For comparison, one of my favorite software companies, Twilio, is currently trading at an EV/sales ratio of 22. That’s already high, even for the strong economic market we’re seeing now.

I wouldn’t ever recommend a company trading at those lofty valuations, let alone something trading at twice that.

Context and valuation are extremely important in investing. And assuming Slack lists its shares around a 40 EV/sales ratio, its stock is going to collapse by at least 50%.

In a case like this, it’s smart to let the hype die out. Wait for the shock of disappointment and for the stock to fall. Then, look for a window to buy in when the market negativity is bottoming out.

And keep in mind, just because I expect a poor showing from Slack in the near-term doesn’t mean you should ignore the IPO boom unfolding this year.

Everybody knows that many of the 1999 IPOs crashed and burned within a year or two—wiping out many retail investors.

But what you may not know is that by 2002, those 1999 IPOs with sales of $100 million or more were trading 45% higher, on average, than the smaller IPOs that had survived the bust.

In other words, the more established of the 1999 IPOs thrived through the dot-com bust.

And that same pattern has continued through today. Established companies that go public tend to make good investments in the long run.

As I already said, thanks to the flood of venture capital, the tech companies going public today are older and more developed. They stand a better chance of flourishing in the long run.

That’s why the 2019 IPO boom should be viewed as an opportunity. Smart investors will make their money several times over in the years ahead.

These are technologies that 99% of Americans have never heard of… But in a few years’ time, they’ll be an integral part of our daily lives.

I’ll also give you details about four small-cap tech companies involved in these technologies. They’re early-stage investments with the chance to turn $10,000 into a six-figure windfall.

You can reserve your free spot to attend my special event right here.