In August 2016, I pounded the table and told my subscribers to buy a biotech company called Sarepta Therapeutics.

Sadly, DMD is fatal. Death usually occurs before the age of 30.

So what made me recommend Sarepta out of the hundreds of public drug companies?

It all had to do with three little words. In the right hands, these three words have been worth hundreds of billions of dollars.

Those three little words are “orphan drug status,” or ODS for short.

If you’re fortunate enough to own stock in a company that gets ODS approval from the Food and Drug Administration (FDA)… you’re popping champagne bottles because you know your financial life is about to change forever.

Getting an ODS gives a company seven years of exclusivity for their drug. No competitor can market or sell a rival to an orphan drug until the exclusivity period is over.

Let me repeat that… seven years of exclusivity.

It’s rare when you can get a government-enforced monopoly. And that’s what piqued my interest in Sarepta.

Based on my research, I was confident the FDA would award Sarepta ODS for eteplirsen.

That is exactly what happened on September 19, 2016. Sarepta shares exploded almost 100% higher on the news… 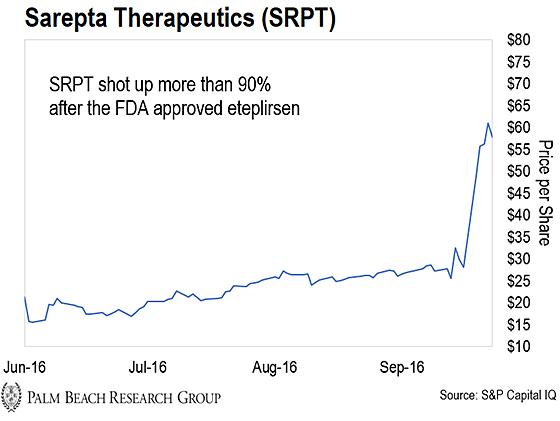 I figured we’d have to be in the stock 3–5 years to see that type of gain. So when we saw as much as five years’ worth of gains in one day… we jumped on it. We sold our stock for a near-100% gain in just over a month.

Now, near-100% gains in one month is nothing to yawn at. But I’m here to tell you, that’s peanuts compared to the idea I want to share with you today.

It’s an idea we think can grow by at least 50x.

You Have a Huge Money-Making Opportunity in Front of You

If you’ve been following me for the past two weeks, you know I’ve been pounding the table on the pre-IPO market. It’s the biggest life-changing opportunity I’ve seen since the crypto boom of 2016–17.

During that period, many of my subscribers wrote to me and said they had made “set-for-life” money in as little as two months. That type of opportunity is now present in the IPO market.

Remember, an IPO – or initial public offering – is when a private company lists on a public exchange.

In January, I predicted we’d see a mega wave of IPOs hit the market… And that’s happened exactly as I expected. In the second half of 2020, we’ve seen 241 IPOs so far. It’s the fastest start to the second half in 13 years.

Here’s what you need to know: Biotech IPOs are leading the way. Nearly half of the IPOs so far this year have come from the biotech space.

So what does all this have to do with you?

When I recommended Sarepta in 2016, it was (and still is) a large publicly traded company. So even though the FDA’s approval of its drug was extremely bullish… it could only move the needle so much for a company already valued in the billions.

If you really want to make life-changing – and I’m talking “set-for-life” – gains in the biotech space… you need to find a much smaller, early-stage company with ODS approval.

These are companies that can make you 50x returns – not in 15 years… but in as little as one day.

And that’s what I want to talk to you about today.

How to Get In at “Wholesale” Prices

As I mentioned above, the FDA gives orphan drugs a seven-year monopoly to treat certain rare diseases. That seven years of exclusivity can be wildly lucrative for shareholders.

Take Humira, for example. It’s one of the world’s best-selling drugs.

The FDA approved the drug in 2005 to treat juvenile rheumatoid arthritis. But in 2015, it granted Humira orphan status to treat hidradenitis suppurativa – a type of skin disorder.

Since that first FDA approval, shareholders of Abbott Labs (the original maker of Humira) have seen gains as high as 124%. (Humira is now owned by AbbVie, which spun out of Abbott Labs in 2013).

Now, that’s a great gain… But investors had to wait nearly a decade to harvest all those profits. Many of us don’t have that kind of time.

If that describes you… then you need something that can move the needle on your wealth right now. The good news is, I’ve found it. The bad news is, you can’t buy it from your local broker.

And buying in at the public IPO price won’t get you set-for-life money, either.

If I gave you access to every IPO this year at their IPO prices, you would’ve made 36%. There’s no way you can get set for life with that.

But if I had given you access to every pre-IPO deal before they went public, you’d be up an average 22,946% on the first day they traded publicly.

The reason pre-IPO investors can make those types of returns is because they buy their private shares for pennies – or “wholesale” prices. Then on IPO day, they can dump them on the public markets for 10, 100, even 1,000 times the price they paid.

Imagine making 22,946% in one day. That’s the “set-for-life” power of getting into a great pre-IPO deal. One deal… one day… and your whole life can change.

So you can see why billionaire venture capitalists poured an estimated $6 billion into biotech in the second quarter of this year. The profit potential is off the charts, and they know it.

Here’s What to Do Now

I’ve been sharing all this information with you because I’ve found a pre-IPO company in the biotech space that I believe has the potential to make life-changing gains when it goes public.

Most importantly of all, it has already received an orphan drug designation that could make it much more profitable than the typical biotech IPO – historically as much as 24x more profitable.

Of the 10 best-selling drugs of this century, nine of them received the orphan designation. We believe this could be the next one. In fact, I think it has the potential to make 50x returns.

I put together a special presentation to go over this urgent opportunity. You can watch it right here…