I’ve been to over 100 conferences in my investment career, but the most recent one made me sweat—literally…

Temperatures during the two-day event were in the 80s. And the venue was open to the elements… with no air conditioning.

The organizers placed industrial-sized fans—backed by buckets of ice—in strategic spots to cool down attendees.

Now, if you’ve never heard of Monmouth Park, it’s one of the oldest racetracks in America. It first opened its doors in 1870 and still holds live horse races today.

But I wasn’t at Monmouth to bet on horses…

You see, at the Daily, we travel the world looking for game-changing trends.

Outside of Nevada, sports gambling has been illegal in the U.S. since 1992. But last May’s Supreme Court ruling allows states to license and tax sports gambling on-site and online now.

And over 25 more states have introduced legislation.

In the next few years, sports betting will be legal in at least 90% of America.

And this is big business…

In fact, Daily editor Teeka Tiwari says this trend could be as big as the end of alcohol prohibition:

The last time something this big happened was when the ban on booze was lifted in 1933. The end of Prohibition unleashed a $3 billion industry back then… That’s $56 billion in today’s money.

The market for booze today is $1.4 trillion. The states take their cut in taxes. And they’ll do the same with sports gambling.

You see, according to the American Gaming Association, bettors wager an estimated $150 billion each year on sports illegally. And billions of more dollars will come in from those who weren’t willing to bet illegally before.

So legalization sweeping across the nation will send a tidal wave of cash to states through tax revenues. And the sports betting ecosystem (bookmakers, casinos, sportsbooks, technology pro­viders, and TV networks) will rake in billions, too.

That’s what brought me to Monmouth…

On June 14, 2018, Monmouth opened the first sportsbook in New Jersey. It was standing-room only. And over 1,000 people showed up.

Governor Phil Murphy placed the state’s first-ever legal sports bet. And he returned last month to celebrate the anniversary at the conference.

Lawmakers, government officials, corporate executives, and other industry experts joined him. I was the only investment newsletter registrant… 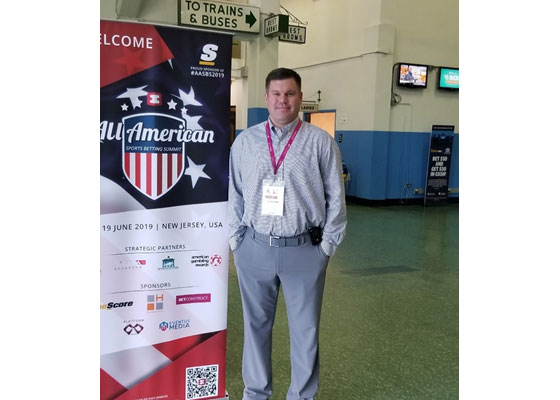 At the All-American Sports Betting Summit

And here’s what I learned there…

And despite Nevada’s 70-year head start, New Jersey has surpassed the gambling mecca in sports wagers…

Remember, at least 34 other states will enter this market in the coming years. And this huge trend means there’s big money to be made…

Where to Place Your Bet

Soon, sports betting will be as commonplace as beer and hotdogs at ballparks. Fans will be able to place bets on social media platforms like Google, Facebook, and Twitter.

But there isn’t a simple way to play this trend—yet. For instance, there’s no official sports betting exchange-traded fund (ETF).

Now, most people will think investing in casinos would be the best way to ride this trend. But we think the better plays will come from niche areas like:

The time to position yourself is now. So to narrow your search, look through BJK’s holdings and focus on these areas.

P.S. Teeka and I have been behind the scenes in this market for nearly a year. And we’ve found two companies everyone should look at. Neither are casinos.

We’ve put detailed write-ups of each in our new report, “Prohibition Profits: The Ground Floor of the Next Trillion-Dollar Market.”

And you can learn how to get it—along with our report, “How to Make 100% Legal Cannabis Profits Right Now”—by watching Teeka’s free presentation right here…