If you follow the markets, then you may believe we live in a topsy-turvy world.

We’re still in the midst of a pandemic… Civil unrest is spreading across the country’s major cities… And President Trump is threatening to deploy the active military to patrol the streets.

Yet, the market continues to climb.

But there’s a dirty little secret behind the market’s rise. And if you don’t know what it is, you could be missing out on massive gains or – even worse – losing money on the wrong stocks.

The Secret Is in This Chart 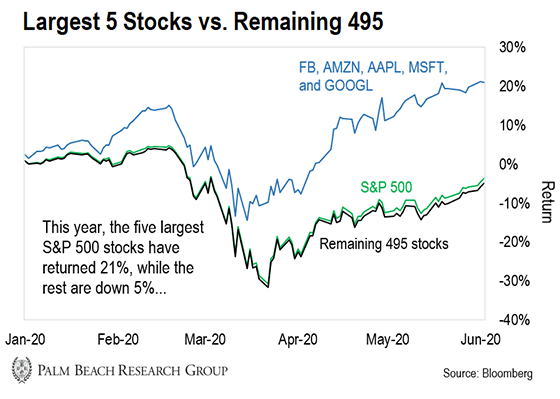 It compares the performance of the five largest S&P 500 stocks to that of the remaining 495 and the S&P 500 overall.

As you can see, these five stocks are doing most of the heavy lifting: Amazon, Apple, Facebook, Google, and Microsoft. Combined, they’re up an average of 21% year-to-date. Meanwhile, the remaining 495 stocks are down an average of 5%.

At PBRG, we have a special name for companies like Amazon, Apple, Facebook, Google, and Microsoft. We call them “outliers.”

And there’s no one better at finding these companies than Palm Beach Trader editor Jason Bodner.

You see, only a handful of stocks really carry the market higher. In fact, over the past 100 years, just 4% of stocks have accounted for nearly all the market’s profits each year.

And the outliers are the 1% that account for nearly half of all the profits of the market each year – stocks that can make you 10x, 100x, or even 1,000x your money.

As Jason says, if you’re not targeting these companies, you’re basically wasting your time as an investor.

Of course, it’s not easy to unearth outliers. It’s like trying to find a needle in a haystack.

But Jason has found a way to track them down: Follow the big money. As he says…

Big institutional money accounts for about 70% of all trading volume every single day. These massive investors collectively manage trillions of dollars. They have multimillion-dollar budgets and a small army of professional analysts conducting research.

And when they start buying a stock, they lift the price higher and higher. These “outlier” stocks – the 1% of the 1% – are where the big money is hiding out.

So to sniff these stocks out, Jason created his own “unbeatable” stock-picking system that follows the big money’s movements…

Jason used his experience from nearly two decades at prestigious Wall Street firms like Cantor Fitzgerald and Jefferies – regularly trading more than $1 billion worth of stock for major clients – to make sure his system is highly accurate, comprehensive, and effective.

It scans nearly 5,500 stocks every day, using algorithms to rank each one for strength. It also looks for the movements of big-money investors.

When it sees them piling into or getting out of a stock, it raises a yellow flag. Then, he puts these yellow flags through another filter.

It’s that simple: When you see red, the big money is selling. And when you see green, it’s buying. Jason’s system takes all the emotions out of investing.

Where the Outliers Are Hiding

Jason told me that big-money buying was in full force last week. There was only one sell signal across all the main market sectors. Even lagging ones like energy saw some institutional buyers pile in.

And the chart below ranks the main market sectors based on their strength, as measured by his system. The higher the number, the more big money the sector is seeing – and the stronger it is…

This means most of the green flags are popping up in the technology and healthcare sectors. So if you’re looking for outliers, that’s where you want to look.

As always, do your homework before making any investment. And don’t bet more than you can afford to lose.

P.S. To truly profit from this market rebound, you have to target the outliers – the stocks that’ll rebound even higher than the broad market. And as I’ve shown you, Jason’s system is designed to track them down.

In fact, it identified one life sciences software stock for subscribers to his Palm Beach Trader service days before the market’s bottom. Now, it’s up over 78% in less than three months. (And three of his other tech picks are already up by triple digits, with a fourth on the way.)

But don’t worry. You can still join Jason to find the next outlier. He’s even put together this special presentation about his system so you can learn how…