When it rains, it pours… And that’s what we’re seeing with tech stocks.

Over the past two weeks, four major tech companies (Facebook, Google, Amazon, and Intel) were hit with a flurry of bad news…

Social media giant Facebook is trying to recover from a major privacy scandal involving the breach of up to 87 million users’ data. Its stock has plummeted 23% over the past two months.

Google was a casualty of the Facebook scandal… It also sells user information to advertisers. It’s down 15% since February 1.

The bad news didn’t stop there…

Finally, Apple announced on April 2 that it would stop buying chips from Intel. Intel fell 5% that day on the news.

These four companies make up 25% of the Nasdaq 100. When they fall, they pull down entire indexes with them.

While the media is having fun sensationalizing these stories, we’re looking behind the curtain to see what’s really going on… And they are missing one big thing.

What they’re not telling you is what’s going to make us some money.

Why You Should Look Past the Headlines

Despite all the bad press, Facebook, Google, Amazon, and Intel are still making money.

That’s right. None of these negative stories will impact their bottom lines. Let’s take a look at them—one at a time.

Facebook came under scrutiny last month after reports revealed that a research firm had harvested data from as many as 87 million Facebook users.

Celebrities and companies closed their Facebook accounts. And the #deletefacebook movement took off.

But as I told you last week, Facebook is actually gaining new users.

According to Mobile Marketing Magazine, Facebook gained active users in nine out of the 10 countries where it’s most popular. (Only Brazil didn’t add users.)

Plus, Facebook’s growth isn’t coming from the United States. It’s coming from abroad… and from its Instagram business line.

Of the 31 Facebook analysts that Bloomberg tracks, only one lowered his first-quarter profit numbers. And he only lowered his expectations by a penny.

The average earnings expectation for the first quarter has increased from $1.30 to $1.36 since the scandal.

Those who know Facebook best know that the scandal won’t impact earnings. This will blow over.

The web search company was a casualty of the Facebook scandal.

Both companies have similar business models. They collect massive amounts of data from their users and then sell it to advertisers.

Let’s get this out of the way… Despite the president’s tweets, Amazon isn’t destroying U.S. jobs.

Last year, Amazon had about 113,500 net new hires (the company has 566,000 employees). If the company were a U.S. state, it would rank fifth in terms of job creation over that time frame—after Texas, California, Florida, and New York, according to data from the Bureau of Labor Statistics, just edging out Georgia.

And Amazon isn’t a monopoly, either. If you don’t like Amazon, there are thousands of other websites (not to mention brick-and-mortar stores) to choose from.

Sure, Amazon tumbled after the president’s tweets… But that’s temporary.

That’s because Amazon is making money hand-over-fist. Analysts project revenues to grow 30% this year… and free cash flow (how much cash is left after paying all the bills) to rise 120%.

We get it… President Trump is no friend of Amazon. (He dislikes CEO Jeff Bezos, who also owns The Washington Post. Trump calls the Post “fake news.”)

But business as usual will continue for the retail/tech/media goliath… and so will its epic stock rise.

Intel fell more than 5% on the day Apple announced it would stop using Intel chips in its devices. That’s a large move for Intel, which has been very stable.

But here’s the thing… The Apple deal wasn’t very profitable for Intel.

Apple generated about 4% of Intel’s revenue last year, but less than 1% of its profits. (Besides, the deal runs through at least 2020, so it won’t end right away.)

Analysts project Intel’s earnings will grow 25% this year. The company is transitioning from selling computer hardware to supplying chipsets for higher-growth industries like cloud storage and the “internet of things.”

This shift will boost margins and propel earnings higher.

Intel won’t even notice losing Apple as a customer on its financials at the end of the year.

When you dig deeper, you realize the headlines are just noise. They’re immaterial to the earnings power of these companies.

And the market is beginning to catch on… It looks like it’s starting to reverse course.

As you can see in the chart below, the tech sector has had the double dip that we predicted in March. Now, it looks like the market wants to go higher… 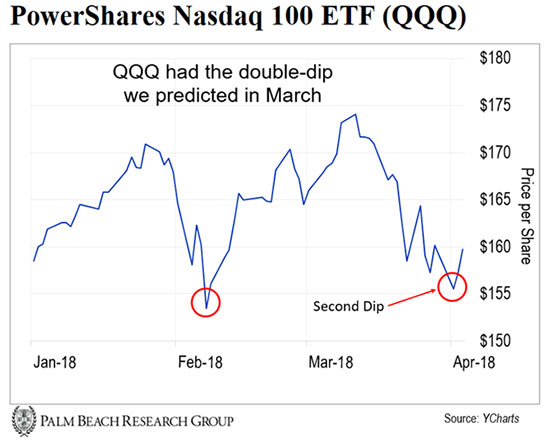 The best way to capitalize on the tech sector’s misfortunes is to buy the PowerShares Nasdaq 100 ETF (QQQ).

It’s full of large tech companies that have led the market’s recent run up… Look for them to resume leading the march higher.

Use this perfect storm of bad news to get tech companies at discounted prices.

P.S. I think we’re going to see one of the best earnings seasons in history coming up. I’ll have more on that soon.

Can you spot the powerful anomaly hidden in this chart?

But thanks to a former MBA college dean and millionaire trader, now you can. And it could make you more profits in three hours than most investors make in three years… 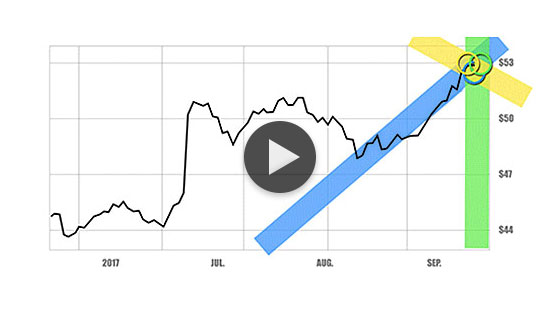