Nick’s Note: Despite a bevy of positive news in the crypto space, bitcoin prices remain mired in a slump. World-renowned cryptocurrency expert and former hedge fund manager Teeka Tiwari says that’s due to a gap between market fundamentals and investor sentiment.

Nick: Teeka, you recently warned your subscribers to expect more volatility from bitcoin. Can you give us an update on what’s driving it?

As I’ve told you before, the Securities and Exchange Commission [SEC] spurred the sell-off by its recent decision to treat nearly every initial coin offering [ICO] as a security.

The SEC’s decision is causing many crypto projects to go out and raise dollars… because they’re going to have to hire a team of lawyers to keep the SEC at bay.

If they can’t defeat the SEC—or convince the SEC that they didn’t issue securities—then they’re going to face massive fines… and the possibility of repaying investors who bought tokens from their ICO sales.

When I first talked about this, I said, “Look, this is akin to forced margin selling. It will create panic-selling, and you’ll see prices go lower.”

Even last month, when bitcoin was at $4,400, I said it’s still too early. You’ve got to wait and be patient. Prices are going to go lower.

And we’ve seen bitcoin prices go as low as $3,200. As nasty as that is, I don’t think the selling is over yet.

Nick: What makes you say that?

Teeka: What you have to understand is that there were only two funding currencies for these ICO projects: ether or bitcoin.

Now, we have widespread panic among ICOs that they’ll have to pay huge fines… married to the fact they’re some of the largest holders of bitcoin and ether on the planet. So you can understand why ether and bitcoin are dropping so violently.

We already have very negative investor sentiment… And that’s compounded by thousands of projects that need to raise cash—dollars, yen, pounds, euros, etc.—and they needed it yesterday.

So you’ve got this mass, forced liquidation—almost identical to what we saw in the Great Financial Crisis of 2008… Hedge funds, brokers, and banks were in such desperate need of liquidity, they had to dump their equities at any price.

That’s how amazing companies like American Express dropped over 80% to below $10 per share. Today, it’s back over $107.

We’re seeing the same thing happen in the crypto space. Forced selling is bringing down prices, even as wildly bullish news is taking place. It’s like a tale of two markets.

Nick: What do you mean by “a tale of two markets”?

Teeka: First, we’ve got this “external” market where there’s all this forced selling just hammering prices. I think we’ll see another week or two of basic pandemonium, turmoil, and volatility. Then, we’ll have wrung the market out at that point.

By then, if you wanted to or needed to sell, you would have already sold.

So the “external” market—the market we see—is very bearish.

But what I call the “internal” market is very bullish. The internal market deals with the bigger drivers of crypto prices. For instance, did you know transactional volume is exploding on the bitcoin network?

So more people are actually using bitcoin, even as the price is coming down. On top of that, not a single major institutional player has deviated from their stated desire to open their trading platforms to bitcoin.

In fact, the Nasdaq—the world’s second-largest stock exchange—went out of its way to confirm it will still launch a bitcoin futures contract sometime in early 2019.

And the owner of the New York Stock Exchange [NYSE] had to delay the launch of its bitcoin exchange by a month because the demand for the service was so high, it needed to spend more time training its customers.

So the piece that has to do with usage and adoption is thriving. And as we move forward, these “internal” levers will begin to impact the external market and ultimately drive the market to new highs.

Now, sitting here at the end of 2018 with the crypto market getting hammered, it’s almost inconceivable to think about new highs.

Nick: What will drive the market to new highs?

Wall Street was left out in the cold in 2017. While crypto companies like Binance, Circle, Kraken, and Coinbase made collective billions in fees… Wall Street made nothing.

If you go from a market that has only 35 million people who can access it—where the crypto market is right now—and you open it up to 500 million people through the NYSE, Nasdaq, Fidelity, TD Ameritrade, Citigroup, and many others… that asset price has to go up.

There are no ifs, ands, or buts.

Nick: So what’s the next opportunity in cryptos?

Teeka: This selling has really unearthed a very profitable opportunity. There’s a particular niche in the crypto market that I’m finding wildly interesting.

It’s an area I think can make investors a lifetime of income as the market recovers.

That’s why on Wednesday night at 8 p.m., I’m going to have a special event to discuss this very specific opportunity.

I’m not ready to reveal all the details yet… I want to talk to you about it in much more detail on Wednesday at 8 p.m. So make sure you tune in for that.

Of course, if anything happens that you need to know about right away, I will be in contact with you.

Nick’s Note: As Teeka mentioned, he’ll be making an extraordinary announcement on Wednesday at 8 p.m. ET.

During this webinar, he’ll give you the inside scoop on an event that will transform the crypto market in 2019… He’ll also show you a leaked Wall Street document that reveals what this event is.

Plus, he’ll announce his bold, new venture that could hand you the chance at an extra $81,624 per year.

The only way to get your invitation is to register for the event. Click here and enter your email address for free access right now… 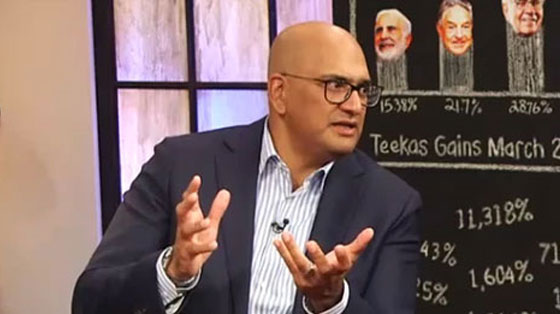