Nick’s Note: On Mondays, we run the latest insights from former hedge fund manager and PBRG guru Teeka Tiwari. It’s a feature you can only find here at the Daily.

The stock market is on track for its worst monthly performance in nearly a decade. And October’s ride has been extremely bumpy. This has many people asking, “Is this the start of a bear market, or is the bull market taking a temporary break?” Teeka has the answer below…

The market has been roughed up this month…

Although 10 years have passed, horrible memories of the 2008 market crash loom in investors’ minds.

“Are we about to tip into a prolonged bear market?” That’s the question on many folks’ minds right now.

It’s a fair question. After all, this is one of the longest bull markets in history. It certainly feels like we’re due, doesn’t it?

But here’s what I’ve learned about markets… They can stay bullish (or bearish) for a very, very long time. Just because we’ve been in a bull market since 2009, doesn’t necessarily mean the party is over.

Let’s rewind to 2011. I remember people telling me the bull market was “long in the tooth” and primed to fall apart. And we did indeed have a 20% correction at the end of that year.

But rather than that being the end, the bull market “reset” itself for even higher highs.

In late 2014, I gave a very bullish speech at the Palm Beach Research Group Infinity conference.

At the time, the Shiller P/E ratio (the price-to-earnings ratio based on the average inflation-adjusted earnings over the previous 10 years) suggested that the market was wildly inflated.

And we didn’t see those gains in a straight line, either.

The market meandered for about a year… and created a great opportunity for us. We used that period to load up on great names like Nvidia (NVDA), Microchip (MCHP), and Maxim Integrated (MXIM).

The “reset” period from late 2014 to 2015 gave us the opportunity to pick up those great names on the cheap. Then, like now, people confused a short-term pullback with the beginning of a bear market.

Where Are We Now?

You can see that dismissing a market just because of its age doesn’t work as an analytical tool. Here’s the two-step process I use instead: I ask myself two questions…

Let’s tackle the first question: Why is the market going down?

The main cause is people fear rising interest rates will act as a headwind to the economy.

Here’s what the Street is thinking…

I don’t agree with this thesis… but many people do. And that’s why we could see some more volatility ahead.

The yield on the 10-year Treasury is abnormally low. It’s yielding just 3.1%. For the last century, it has historically yielded 6%.

That’s important because when rates start at a normal level of 6% and go to an abnormally high level, then it’s a good bet we’re about to enter a prolonged bear market.

But when rates go from an abnormally low level (like they are now at 3.1%) to a normalized level (6%), guess what happens?

Instead of Falling, the Market Booms Higher

A word of warning: Just like in 2014 and 2015, the market won’t go higher in a straight line. It will probably have a short-term rally, then get hit lower again.

That see-sawing motion could play out a few times before the market is ready to gun to new highs.

This type of market action is normal and healthy.

Many of today’s Wall Street traders are under 35 years old. They have very little historical knowledge of the stock market. In their Ivy League schools, they were taught that “interest rates going up equals the stock market going down.”

Wall Street traders’ ignorance of how a rising-rate cycle works when coming up off very low rates is a gift.

Their ignorance will create weakness that we will use to buy the next crop of monster winners like Nvidia, Microchip, and Maxim.

Learning From the Past

Please remember interest rates are rising because the economy is improving. A move to normalized rates won’t be enough to slow down the growth machine that the U.S. has become in recent years.

The closest comparison to today’s rate environment is the late 1940s to the late 1960s. During that period, rates rose from abnormally low levels back to normal levels. Using traditional thinking, you’d think this was a terrible time for stocks. But it was the exact opposite.

And we saw massive growth in the economy.

Things didn’t begin to slow down until interest rates went over 6%. Equities got crushed after that point. But we’re not anywhere close to that right now.

Remember, the 10-year Treasury is around 3.1%. Rates will have to double from here before they have a meaningful effect on corporate earnings.

So to answer my second question from above on whether I agree or disagree with Wall Street’s logic… I strongly disagree.

Wall Street’s logic that higher interest rates will kill the bull market is an incorrect analysis. That means a buying opportunity lies ahead.

Our game plan is the same one I’ve been pounding the table on since late 2014: You want to stay away from bonds and stay invested in high-quality stocks.

As long as interest rates are below the norm, we are excited about the market. The key here is to be patient. Let the market do its volatility dance while we eagerly eye new ideas to bring to you.

Nick’s Note: How are you playing the stock market volatility? Let us know right here…

Thursday’s essay, “What Investors Can Learn From Michael Jordan and Wayne Gretzky,” has readers questioning our sports knowledge…

Nick’s Reply: Thanks for writing in, Kurt. You’re partially correct here; Lombardi said both. And although he’s not the originator of the quote, “Winning isn’t everything; it’s the only thing,” he did use it. (Many websites attribute the original quote to famed UCLA football coach Henry Russell “Red” Sanders.)

From Wayne P.: Showing Michael Jordan with 22 trophies compared to Bill Russell with 17 isn’t quite an apples-to-apples comparison.

The Defensive Player of the Year Award didn’t exist until the 1982–83 season. The NBA Finals MVP Award did not exist until 1969. If these awards would’ve existed during Russell’s career, you could add at least 10 more trophies to his total.

Nick’s Reply: You make a valid point, Wayne. Choosing between Russell and Jordan is like choosing between Apple and Amazon. We’d be fine buying either before they became world-dominating companies.

Dave Forest, a professionally trained geologist, has visited over 23 countries. But one of his most stunning finds is here in America.

Dave discovered a rare fuel source buried in the ground in Idaho that he calls “Brandt Oil.” It could change the energy landscape in the U.S. for good… 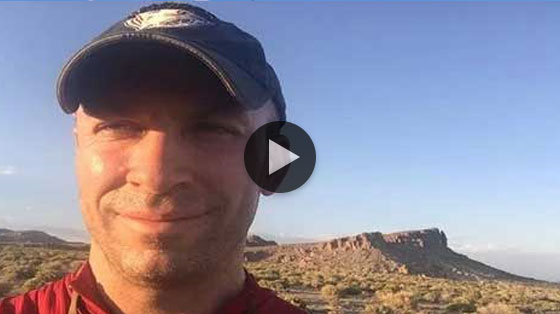