Nick’s Note: In 2017, JPMorgan Chase CEO Jamie Dimon called bitcoin a “fraud” and threatened to fire any traders working for him if they were caught trading bitcoin. Fast-forward two years, and the nation’s largest bank is now planning to launch its own crypto product.

What happened between then and now? I called up world-renowned cryptocurrency expert and PBRG guru Teeka Tiwari to find out…

Yet earlier this month, the bank announced it’s launching its own cryptocurrency. Is this part of the Great Crypto Conspiracy you were talking about last year?

Last year, I told you the story of legendary gold miner George Hearst, who was the father of publishing magnate William Randolph Hearst.

During the Dakota gold rush of the 1870s, George Hearst swindled early stage prospectors out of their land by spreading misinformation.

It’s also rumored he used murder and intimidation to force people to sell their claims. He even purchased newspapers in the town to influence public opinion.

In a bid to buy in cheap, Hearst’s agents started to float rumors that the government would seize all land in the town. Prospectors believed the rumors—and sold their mining stakes for pennies to Hearst’s agents.

Hearst made a fortune from his conspiracy theories. They even made a TV series about it called Deadwood.

And we saw a similar conspiracy play out in the crypto space last year.

Nick: So is Dimon the modern-day version of George Hearst?

Teeka: Well, he certainly nailed the intimidation part when he threatened to fire JPMorgan traders caught trading bitcoin. Here’s the funny thing, though… When he made those comments, bitcoin dropped about 22%.

Surprise, surprise… Some of the biggest buyers on that weakness were JPMorgan traders out of London.

And to my knowledge, no one was ever fired. So to answer your question: Saying one thing and doing the exact opposite is precisely the sort of thing George Hearst did.

Teeka: First, let’s be clear… JPMorgan is using its own private version of a cryptocurrency as a way to move money around at lower costs. It will never compete with bitcoin or ether.

That would be like saying that the public internet would become obsolete just because General Mills had its own internal website.

Nick: That makes sense. And it seems like we’re starting to see Wall Street finally catch up to you…

Last August, I told you that pension funds were getting closer to investing in cryptos—and that we’d see the beginning stages of pension fund money come into crypto assets in 2019. That’s exactly what’s happening now.

They’re the first U.S. pension funds to take the plunge into cryptos. And this comes on the heels of Yale University’s endowment fund investing in crypto assets last year.

So we’re starting to see institutions dip their toes into cryptos. This is the beginning trickle that will turn into a tidal wave of pension fund capital coming into crypto assets.

Nick: All of this positive news is building momentum in the crypto space. Bitcoin is on the cusp of breaking the $4,000 level for the first time since January 2019.

Does this mean the “Crypto Winter” is over?

Teeka: I would say it’s “thawing.” To borrow a phrase from former Federal Reserve chair Ben Bernanke, some “green shoots” are emerging.

As I’ve said previously, I thought bitcoin put in an intermediate-term bottom when the Chicago Board Options Exchange [CBOE] pulled its bitcoin exchange-traded fund [ETF] application due to the government shutdown… yet the price of bitcoin didn’t budge.

The CBOE later resubmitted the application. But the point is that in a bear market, prices go down on good news—and even more so on bad news. And this news was technically “bad,” but the market still shrugged it off.

Now, is this the bottom? Time will tell… But I think for the intermediate term, bitcoin has put in a bottom. It’s acting like an asset that wants to go higher.

Nick: Many crypto investors have thrown in the towel during this brutal bear market. You’ve told your subscribers to hold strong… and that there’s light at the end of the tunnel.

So what should crypto investors do now?

Teeka: This isn’t the first 80%-plus massacre the crypto market has seen—and it won’t be the last.

I’ve always told my subscribers to use small position sizes and to be emotionally prepared for these 80% drops. All you have to do to make a fortune in crypto is be rational in your position-sizing and be patient.

The Crypto Winter is thawing. Another bull market will come again. Just like every other crypto bull market in the past, the next move up will make the previous one look like a pimple on an elephant’s behind.

Nick: That’s a good way to put it. Thank you for talking to us again, T. Take care.

Teeka: No problem. You, too.

Nick’s Note: As Teeka says, 2019 will be the year that cryptos rebound as pension funds and other institutions begin buying digital assets. And he’s found a new niche market in the crypto space that will generate streams of income when this happens.

From Thomas L.: I agree with Bernie… not because I think workers should be paid more or that share buybacks fuel income disparity, but because share buybacks screw investors.

From Charles H.: I’m somewhat ambivalent regarding Bernie Sanders’ proposal to restrict share buybacks. I disagree with tying stock buybacks to hourly pay and benefits. However, I believe that income inequality needs to be addressed, and I agree with Sanders that stock buybacks make it worse.

While I don’t agree, I can certainly understand why politicians would see restricting buybacks as a direct way to approach the problem of income inequality.

From Steven I.: Bernie’s plan has nothing to do with socialism. It’s about reining in the unbridled greed of late-stage capitalism. It’s about stopping the outright fraud by corporate boardrooms, which are spending shareholders’ money (or worse, driving the company into mountains of debt) to enrich themselves.

It’s about calling a halt to the artificial levitation of the stock market, even when the economy is facing a slowdown and stocks are priced at or beyond fair value. It’s about giving back some benefit to ordinary working stiffs with salaries several decimal points to the left of the greedy directors’ ones. It’s about getting these greedy boardroom pigs to invest in the companies they run and the people who work for them day after day.

If you’re done with cryptos… weed stocks… or options, then go right here.

Our friends at Casey Research have uncovered an entirely different way to potentially make 1,000% gains this year. Get the full story right here. 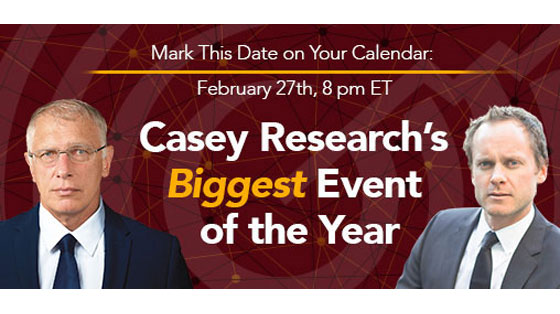