Nick’s Note: Regular readers know we’ve been pounding the table this past week, telling you that the cryptocurrency bear market is coming to an end. In today’s essay, PBRG guru Teeka Tiwari reveals a crucial piece of evidence that indicates the crypto market is going much, much higher…

A New York City film crew followed a brash young trader’s every step. At just 32 years old, he had been dominating the trading scene. He was most famous for making $100 million in a single day (around $250 million in today’s money)… all using a secret trading tool he called “The Analog.”

But he had made one critical mistake.

You see, this man had unwittingly revealed the secret to his success to the documentary crew.

Realizing his mistake, he spent years buying up every single copy of the film he could, so that no one else could access his edge.

In the 1980s and ’90s, rare copies of the film would sell for thousands of dollars.

By the time it went mainstream via the internet, the trader had already made over $4.5 billion… all from “The Analog.”

Today, I want to explain to you what “The Analog” is… and how I’ve been using the idea behind it for the past two years to make many of my readers wealthy from the cryptocurrency market.

More importantly: I’ll show you what “The Analog” is telling us right now about the future of the crypto market.

An analog model uses one data set to forecast the outcome of another similar data set.

That’s how Paul Tudor Jones—the young trader from our story above—made $100 million in 1987. He and his then-27-year-old partner, Peter Borish, stumbled upon an amazing discovery.

While analyzing the Great Bull Market of the 1920s, Borish realized he had seen similar chart patterns before. He pulled out a chart of the 1980s bull market and put the two side by side.

After manually entering the opening, high, low, and closing prices of the Dow in the 1920s and the ’80s, he uncovered something remarkable.

Two markets—separated by six decades—were showing an almost identical trading pattern. They matched 92% of the time. Tudor and Borish called the study “The Analog.”

They bet their entire fledgling hedge fund on “The Analog” continuing. A 2014 Business Insider article referenced “The Analog” with a quote from Tudor Jones about his remarkable performance in 1987:

How did he manage to profit so handily from an event nobody saw coming? Jones answers, “our analog model to 1929…”

All through the 1980s, Jones followed “The Analog.” It proved to be the secret path that led him and his investors to a mother lode of wealth.

Our Very Own “Analog”

That’s when I discovered the huge potential of crypto assets.

In that moment, I knew I had uncovered a massive wealth-building opportunity on par with the 1990s tech boom.

Back in the ’80s and ’90s, I saw technologies like the PC and internet go from being ridiculed curiosities to mainstream necessities in just a few short years.

That experience gave me “The Analog” for understanding how the crypto trend would play out.

Just like the early tech days, I knew crypto was little-understood and would face huge skepticism, but would eventually impact just about every aspect of our lives.

Even the early 2018 pullback correlates with the 1990 pullback we saw in tech. Just like Peter Borish’s study of the 1920s and 1980s stock markets, the crypto market is closely following the trajectory of the 1990s.

So far, we’re seeing an 87% correlation between the 1990 Nasdaq and today’s crypto market (see chart below). 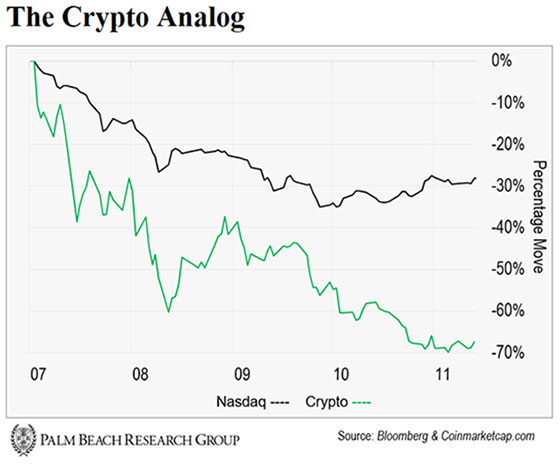 Even though they are separated by 27 years, the correlation between these markets is uncanny.

You’ll see that the crypto market has more volatility and moves faster.

That’s because we have far greater connectivity now. In other words, information moves faster and is much more widespread today than in the 1990s. So moves on both the downside and upside happen quicker and with greater ferocity.

“The Analog” is suggesting we’ll start to see a new bull phase emerge soon in the crypto market.

If it follows the post-1990 recovery, we will see the market start to turn higher in the second half of 2018.

Back in 1990, the market made new all-time highs within 14 months. If we see the crypto market follow the same path, we’ll witness a 300% rally in the entire market.

However, due to crypto being a global market (meaning it’s traded by the entire world, not just a small region like tech stocks were in 1990), I expect new highs to happen in about half the time of the 1990 market.

That suggests we’ll see new highs in the crypto market by the end of 2018.

But it doesn’t stop there.

If I’m correct about “The Analog”—and I believe I am—it suggests we will see a minimum of a tenfold increase in crypto valuations from here.

That is enough of a move to make you rich. Not just “well-off”… not even “well-to-do.” You will become rich.

You will see prices explode higher in a way that will dwarf anything you have seen before.

P.S. According to a recent Thomson Reuters survey, about 20% of financial firms indicate they will begin trading cryptocurrencies over the course of this year. A major national exchange also has announced it’s backing a bitcoin ETF.

There are several other tailwinds that will help push the crypto market up another 10 times from here, too. I’m so confident that cryptos will continue their epic rise this year, I’m giving away $2 million worth of bitcoin to new subscribers, just so they can see for themselves.

To learn how to claim your share of this giveaway, plus receive my full list of 32 cryptocurrencies to buy right now, click here to watch my free presentation…