Warren Buffett is well-known for his market wisdom.

That rule applies to any market.

But there’s another Buffett rule that applies much better to the market we’re in now:

Let me explain why that rule is so important today…

Since the beginning of the year, I’ve been writing that we’re in a short-term cyclical bear market within a long-term secular bull market.

A cyclical bear market is much different than a “secular” bear market.

So what we’re seeing in the markets now is a temporary sell-off. And as I explained last week, we’ll continue to see stock valuations tumble in the short term.

That’s where Buffett’s advice comes in…

The Dow is down 15% on the year. And some stocks in the index are down 50% or more from their highs. So there are a lot of attractive bargains out there.

The question is: How do you know you’re getting a fair price?

Focus on Quality, Not Timing

Like Buffett, I want to buy world-class assets at discounted prices.

These are blue-chip companies with durable revenue streams… and enough cash on their balance sheets to make it through a short-term bear market.

If they’re great companies, the quality of their business and the cash on their books will help them survive until the market turns. Meanwhile, they’ll continue to pay solid dividends year after year.

If it’s a lousy company with little cash on its books and shaky cashflows, it doesn’t matter how much its price drops. You don’t touch it.

In bad times, these companies will have a higher cash burn rate. And if they pay a dividend, they may cut it. That’s why during a bear market you want to focus on acquiring quality companies.

Now, once you’ve identified the “wonderful” companies and discarded the lumps of coal… how do you know you’re getting a fair price on them?

You could wait until they hit the bottom. But none of us have a crystal ball. So trying to time the bottom is a fool’s game.

Instead of trying to get in at the cheapest price, you have to focus on a “fair” price. What’s considered a fair price will be different based upon what industry a company is in. Each company will have a range of valuations it has traded in over the last 20 years.

During market pullbacks like the one we are experiencing now, I want to use market weakness to buy on the low side of the company’s historical range.

That doesn’t mean the stock can’t go lower… It means that over time the share price will rebound and eventually go on to make a new high putting me in the position to make a killing from my bear market entry price.

This is how I use bear markets to get richer from the eventual return of a new bull market.

We saw these types of setups during past market sell-offs…

Take the Great Recession, for example. The entire market tanked 57% from October 2007 to March 2009. But companies like Bank of America were down 95%.

Bank of America is the second-largest bank in the country with 67 million customers and a market cap of $278 billion.

But if you looked at its price chart in 2009, it looked like absolute death… 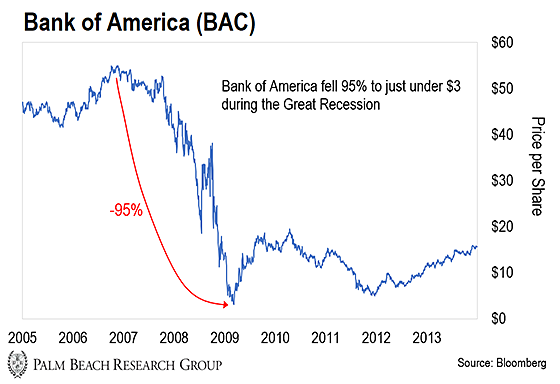 As you can see in the chart, after reaching a high of $55, Bank of America bottomed at around $2.50.

No one wanted to touch the stock… It was absolutely toxic. But it was also a steal at those prices.

At its bottom in 2009, Bank of America traded at an insanely low valuation of 2.6 times earnings. Banks trade at a historical average of 13 times earnings. So that was an 80% discount.

Now, I doubt many people could predict the exact bottom. But it didn’t matter.

Let’s say you had poor timing and bought Bank of America at $6. You would’ve watched your position drop another 50% before the bottom.

Here’s the thing: The company was still incredibly cheap at $6. Even if you bought at that level… you would’ve made a killing over the next decade. 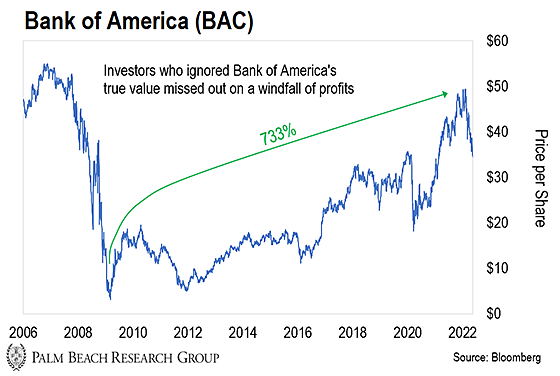 Look, the ride down from $6 to $3 would have been very uncomfortable. That’s half your money wiped away on paper.

But all you needed to know is this…

Bank of America was trading at an extremely low valuation… It wasn’t going out of business… And it still had millions of customers.

(Remember, the federal government bailed out the “Too Big To Fail Banks” like Bank of America with $700 billion in taxpayer money. So it wasn’t going bankrupt.)

Another example of this strategy during the Great Recession is American Express.

Even if you didn’t time the exact bottom and got in at $20, you still got a “fair” price.

When you pull back the camera, you can see you would’ve made 9 times your money as Amex marched back to a high of $200 in 2022… 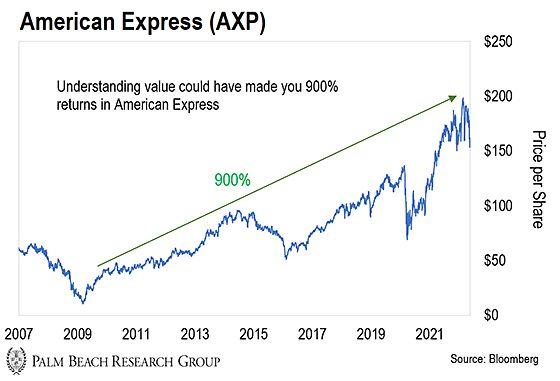 That’s what I mean by getting a wonderful company at a fair price. Will you get the absolute bottom? No.

But can you get in at a price that will make you a significant return? Absolutely.

I know this market sell-off is painful. But if you want to emerge from this bear market richer you have to view the bear market as a gift.

I know that seems counterintuitive when there’s a sea of red everywhere. Yet, you must treat it as a fire sale.

The key is to pick wonderful companies that can make it through this cyclical bear market. They’ll be the next Bank of America or American Express.

The company is down 50% from its all-time high. Yet it’s sitting on about $44 billion in cash.

In five years, you’ll marvel that Meta was ever this cheap the same way we marveled that you could buy Bank of America for $2.50 during the Great Recession.

Look, I know it’s uncomfortable to buy in these times. But I will tell you unequivocally that if you want to change your financial life, it won’t be comfortable.

Going against the crowd is never comfortable. It takes courage.

Friends, if you missed getting in this bull market early, this short-term bear market is like an in-game reset. It’s a chance for you to position yourself for the next leg up.

Make this volatility your servant by using it to buy world-class assets on the cheap… Then hold your long-term investments and ride it out.

A year from now, you’ll be glad you did.