It was like a script ripped from a James Bond movie: An escape from a prison behind the former Iron Curtain.

And through my network of crypto experts and industry insiders, I managed to snag a much-coveted plus-one invite to the most exclusive meeting of tech startup founders in Eastern Europe.

The entire event was limited to just 100 attendees. And I was the guest of one of them.

Here’s the thing: The event was taking place in the former Soviet Socialist Republic of Belarus.

Belarus is a landlocked nation in Eastern Europe. Roughly the size of Kansas, it declared independence from Soviet Russia in 1991.

At the time of my trip, Belarus had lifted its visa restrictions for Americans. So I thought I’d be fine. But I was wrong.

You see, I was flying into the capital, Minsk, from Moscow. And Belarus has a completely open border with Russia.

I didn’t know this…

So, you can imagine my surprise when I flew into Minsk National Airport, and there was no immigration control of any kind. I just walked right off the plane and out to the terminal.

It wasn’t until I tried to check into my hotel that I discovered I’d entered Belarus illegally. Apparently, if you’re American and fly into Belarus from Russia, you must have a special visa.

That’s when my trip turned into a spy novel…

When I arrived at my hotel, the desk clerk angrily shook his finger at me and said, “You are in my country illegally.” He wouldn’t let me check-in and threatened to call the police.

Sitting next to me in the hotel suite, a longtime contact and friend leaned over and whispered into my ear: He could have a car ready to smuggle me out of the country in six hours.

It was tempting. I had no interest in going to jail. But I also didn’t want to be a fugitive.

Long story short, after consulting with a lawyer and turning down my friend’s offer to smuggle me out of the country, I turned myself in at the local police.

Much to my relief, the officer I dealt with was stern but fair. He believed me when I said I’d made an honest mistake.

After signing a sheaf of papers in Russian… and paying four different fines… and securing travel insurance… I finally had all the paperwork needed to receive the elusive Belarusian visa.

Here’s the thing… Even if I’d known the trouble I would get into… I still would’ve done it.

Why? Because the ideas I find for my readers are absolutely worth the risk of jail time.

You can’t find life-altering investments pinned behind a desk, thumbing through financial reports.

You have to travel the world, meet the players, and look people in the eye if you want to dig up great ideas before anyone else.

And that’s what led me on the dangerous trek to my next big idea: A pre-IPO company in the heart of the Amazon rainforest.

Outside the crypto market, the only way to make life-changing gains quickly is through pre-IPO companies… private companies raising money with the goal of trading on the public markets.

Just this year, we’ve already seen 767 IPOs… breaking last year’s record of 480. Some of the biggest include Bumble, Robinhood, and Coinbase. And early investors in pre-IPO companies can see crypto-like gains when they go public…

But just like crypto, you won’t find these deals sitting behind a desk. You have to develop a network of insiders and ride their coattails.

And recently, one of my insiders reached out to me with what could be the single-biggest pre-IPO deal I’ve ever come across. (More on that in a moment.)

This venture capitalist (VC) has built his entire billion-dollar fortune off of 11 private deals. When you find someone with that type of track record, you have to take a shot with them.

That’s why I had my readers follow him into his last deal… what I call No. 11.

It’s a cannabis company located in the Colombian highlands – previously home to some of the most dangerous cartels in the world.

On my trip there, I had a policeman sitting right next to me in an armored SUV holding a flak jacket. If bullets started flying, his job was to get that flak jacket on me. 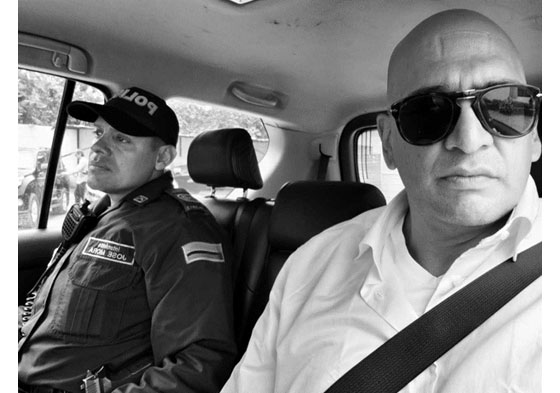 In an armored vehicle in Colombia.

That’s how dangerous this trip was. But again, it was worth it.

Deal No. 11 became the first-ever pre-IPO cannabis company to list on the Nasdaq. And my subscribers who got in pre-IPO have had the chance to see peak gains as high as 854%.

So, when the VC told me he was working on his 12th deal… I knew I had to get access to it for my readers. But I had no idea my due diligence would send me to the doctor…

My Trip to the Amazon Sent me to the Doctor

Out of fairness to my paying subscribers, I can’t release too many details about deal No. 12. But I can tell you this: It’s deep in the heart of the Amazon rainforest.

On my trip to the facility, I caught a nasty bacterial infection. (William Mikula, my chief analyst who accompanied me, also contracted an eye infection during the trip.)

The infection didn’t hit me right away. But I eventually found out that it was slowly eating away at my stomach lining. Bit by bit, my appetite started to diminish. Over the last three weeks, things got much worse.

I could barely eat anything. My stomach was in constant pain… and my appetite had disappeared. I ended up dropping 15 pounds over 21 days.

At my wit’s end, I went to a medical center in San Diego for a long series of tests. They still didn’t know what was wrong… But the specialists there referred me to a local gastrointestinal disease expert.

He put me through even more invasive tests. But he finally nailed it. A bacterium usually found in lesser developed countries had burrowed its way into my stomach lining, giving me an ulcer.

I’m still in the treatment process right now. It involves multiple courses of antibiotics, antacids, and probiotic treatments. The treatment is essentially carpet-bombing my system with various antibiotics.

The success rate is 70%. I told the doctor I don’t want to know what the next round of treatment will look like if this doesn’t take. I’ll cross that bridge when, and if, I have to later.

What you need to know is: I’d do it all over again if it meant I could secure a life-changing investment for my subscribers.

Friends, I’m talking about the Big Board. The grandaddy of them all. And it’s a deal where I believe my subscribers can make 27x their money under the best circumstances.

That’s an insane return for the stock market. And that’s the power of getting into a great deal before it IPOs.

So, yes, it’s worth the risk of getting sick to bring life-changing ideas like this to you. It’s what I live for…

I know some people may be thinking, “Big T, you’re crazy.”

And I wouldn’t blame you. They called me “crazy” when I said bitcoin would be the next world-class asset and pounded the table to buy it at $428.

And they called me “crazy” when I got on my soapbox and told thousands of people about a small pre-IPO company in the Colombian backwoods that would go public on the Nasdaq.

So I’m used to being called “crazy.” But here’s why I don’t mind…

I remember years ago when my daughter – my middle child – got accepted to a private school. And she worked hard to pass that entrance exam.

At the time, some things went askew in my business. And I couldn’t spare the capital needed to send her to private school.

Bottom line: I didn’t have enough money to pay for her school and keep the business afloat.

So I had to sit down with my then-preteen daughter and tell her the hard truth. I said, “Honey, I can’t afford these school fees.” That conversation haunts me to this day.

Friends, you never get over a wound like that. I’m a far wealthier man now than I was back then. But I still carry the guilt of not being able to provide for my daughter.

I couldn’t give her the opportunity she needed at the time she needed it because I didn’t have the money. I don’t think I’ll ever get over it.

If you’re a parent, you know exactly what I’m talking about. That’s a big part of the reason why I do what I do. To keep you from experiencing the types of wounds I did.

And to do that, I have to find ideas that will help you bridge the financial gap between the life you’re living now and the life you want to live.

If my research is correct, and I believe it is, this could be the single-biggest pre-IPO deal I’ve ever been involved in. I think it could end up being worth multiple billions of dollars.

Let me be very clear: If you want in on deal No. 12 – and you want in before it lists on the NYSE … you must act now. It’s critical you make your move immediately.

But what I can tell you is not getting in deal No. 12 could be one of the biggest missed opportunities of your life. And I don’t want you to live with that type of regret.

All to find opportunities that can to 10x, 100x, or 1,000x your money. Ideas that can change your life without putting your current lifestyle at risk.

There’s no higher purpose in my professional life than that…