Most investors don’t know this… but the market is about to get a $250 billion injection any day now.

And if you play your cards right, you can position yourself today to get a chunk of it.

Company executives may have access to inside information in these reports before they publish them.

So the Securities and Exchange Commission (SEC) restricts publicly traded companies from trading their own shares during the periods just before and right after earnings.

Most companies release earnings in April, July, and October. Here’s why that’s important: The September blackout period for stock buybacks is over.

And when these blackout periods end, the market pops soon after… 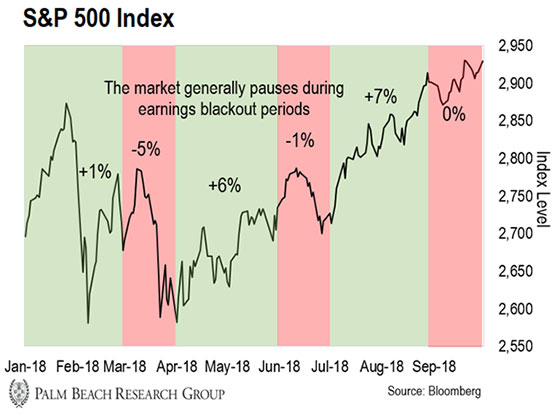 As you can see, every third month, the market takes a pause. September was no exception… After rising 7% in July and August, the S&P 500 was flat last month.

But with the blackout now lifted, companies can start repurchasing shares. And they have $250 billion in capital just sitting on the sidelines… waiting to go to work.

We’re still early in October, so it’s not too late to potentially profit from this wave of money. But first, let me tell you where the dry powder is coming from…

Last year, Palm Beach Research Group guru Teeka Tiwari told me that President Trump would pass a major tax law… and that the new law would be a giant tailwind for corporations.

(See the October 24, 2017 issue of the Daily, “Teeka Tiwari on How to Benefit From President Trump’s Tax Plan.”)

But there was another benefit for corporations in Trump’s tax plan… They’d also be able to “repatriate” money held offshore for a one-time, low rate of 15.5%.

Teeka predicted we’d see over $2.6 trillion of offshore cash come back to the U.S. once the law had passed. And that’s already happening…

Companies are using those repatriated funds—along with the other tax breaks they received—to buy back shares at a breathtaking pace.

According to investment firm Goldman Sachs, we’ve seen a record $762 billion in buybacks in 2018. At that rate, we’ll easily exceed $1 trillion this year.

After the month-long pause, these buybacks are about to continue again. And that’s good news for us…

To find out where all this money is headed, I turned to our Wall Street insider, Jason Bodner.

Jason is the editor of Palm Beach Trader. In the office, we call him our “insider” because he spent nearly 20 years on Wall Street trading stocks for big institutional clients.

If you’re one of Jason’s subscribers, you know he runs a proprietary “early detection” system that looks for unusual buying by institutions. When big institutions start buying, share prices are usually lifted higher and higher.

According to Jason, now is the time to get in front of the wave of money headed into the markets:

Now that earnings season is about to start, the blackout period will be lifted. And corporations can continue plowing hundreds of billions of dollars into the markets.

I’m looking forward to earnings season. I believe we’re going to continue seeing record sales and earnings. And that will trigger the next leg higher in the markets.

Jason’s system scans over 5,500 U.S. stocks every day. And he’s noticed an increase in unusual buying in the health care sector this past week. So expect some of that capital to head into this sector.

The one-click way to play this is the Health Care Select Sector SPDR ETF (XLV). It holds the largest companies in the health care space—like Johnson & Johnson, Pfizer, and UnitedHealth Group.

Meanwhile, I believe industrials and consumer staples will continue to outperform the market as the trade war dies down ahead of the midterm elections.

Bottom line: Use this time before earnings season to add to your favorite positions.