This one trade changed 400 years of history in just four hours.

How so? Normally, it would take 10 days to handle the paperwork. But this trade concluded in less than four hours.

The solution: a blockchain platform that streamlined the entire process.

While the trade was small, it was big for the $7 trillion trade finance industry.

What exactly is trade finance?

It’s when two companies in different countries want to buy and sell from each other. They use a bank to guarantee the transaction…

For more than 400 years, trade finance hasn’t changed much. It requires a mountain of paperwork. And all the parties involved spend a lot of time proving that they truly own what they say they own.

But that’s all about to change.

Today, we show you how the blockchain is changing the inefficient trade finance industry. And we’ll show you how to profit as well.

How the Blockchain Is Disrupting Trade Finance

The trend in blockchain and trade finance is accelerating.

In February 2017, a cargo shipment containing $25 million worth of African crude steamed its way to China.

The merchants involved sold the oil three times during the trip. Banks, agents, inspectors, and a commodity trading firm were all involved.

The traditional analogue solution involved hundreds of documents. And it took at least three hours to complete each trade.

But on this trip, each trade took less than 25 minutes.

The name of the project that made a 25-minute trade possible is Easy Trading Connect. It’s a partnership between Société Générale and ING.

And it works by moving the transactions to a private version of the Ethereum blockchain. 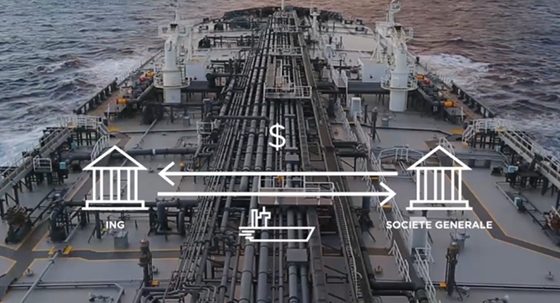 Saving time wasn’t the only benefit of the trade.

ING reported that trader efficiency improved by 33%. And Marco Dunand, CEO of Mercuria, stated the blockchain reduced costs by 30%.

The blockchain is a savior for this manually intensive, paperwork-heavy process.

Physical documents have always been a problem. It opens up transactions to human error, fraud, and delays.

With the blockchain, all documents get digitized. That makes documents safer to move around. And it solves a lot of paperwork problems.

For example, Mercuria sold the oil heading to China three times before it arrived. Because of the blockchain, Mercuria, ING, and Société Générale all had access to real-time data. No one had to go searching for the original source documents.

Further, they were able to “auto-check” documents on a computer rather than doing it manually. That makes for a smooth process.

There’s a huge incentive to move to the blockchain. Santander estimates the blockchain will cut trade finance costs up to $20 billion.

What to Do Next

And the benefit of the blockchain in trade finance is obvious.

This is just getting started. Venture capital firms and financial institutions are pouring millions of investment dollars into the blockchain.

Do you want exposure to the burgeoning blockchain bull market? The simplest way would be to buy a small amount of bitcoin.

Many new blockchain applications base their network on the bitcoin blockchain. And you need bitcoin to buy most other coins.

We recommend you use the Abra exchange to buy bitcoin. You can watch our free instructional video to learn how to set up your own account.

P.S. Trade finance is just one way the blockchain is disrupting age-old industries. Right now, we have six unique blockchain opportunities in our portfolio. And our average gain is 93%! Plus, our next pick has the potential to disrupt Amazon.

I’m kicking off my free three-day training series today, starting with my personal strategy for finding the world’s most promising cryptocurrencies. You can access the first video right here.