Here’s a riddle for you…

Take a look at the two lists below and tell me what they have in common.

If you’ve been following me for the past year, you may know the answer: the blockchain.

When I first started telling my subscribers about the blockchain, it was nothing more than the digital ledger for bitcoin. Its main purpose was to track cryptocurrency transactions.

But the technology has grown exponentially since then.

First, it was the finance industry that took interest in the blockchain because it’s much faster and more efficient than conducting transactions on traditional networks.

Recently, we’ve seen the retail (Walmart) and entertainment (Disney) industries get in on the act. And now the shipping industry is joining the blockchain bandwagon.

Next week, shipping giant Maersk is expected to announce it will start using IBM’s blockchain (the same one Walmart is adopting).

The ledger will track the avocados, flowers, and machine parts the company carries on its enormous cargo ships.

My friends, we’re witnessing firsthand a technology hitting its mass adoption point (MAP) in overdrive. (You can read more about the MAP cycle here.)

And as I’ve told you before, when a technology reaches its MAP, early investors make out like bandits.

We’re still early in the blockchain game. But time is running out…

If you’re still not convinced about the power of the MAP cycle or even the blockchain, consider this…

The first email was sent in October 1971 on a secret government project called ARPANET.

It took two years before people realized just how powerful the invention was. By then, email had gone from virtually none to 75% of all ARPANET traffic.

Email birthed some of the earliest internet success stories… pioneering online service providers like Prodigy, CompuServe, and America Online (AOL) that were all built on providing convenient email access.

The blockchain has the potential to be even bigger than email because it transmits not only communication, but also value.

Instead of simply sending messages, you can build smart contracts on the blockchain… and use the underlying cryptocurrency to trade for stocks, bonds, and even avocados…

Or you can hold the cryptocurrency as an investment…

Use “Digital Shares” to Profit From the Blockchain MAP

Each blockchain has its own cryptocurrency. The currencies are “money” that can be spent or saved… but they also act as “shares” for blockchain startups.

As more people use a particular blockchain, its “shares” increase in price.

Unlike most startups that require you to be an accredited investor, anyone can buy “shares” in a blockchain startup. All you have to do is buy its cryptocurrency.

The easiest way to participate in the corporate move to the blockchain is to own a piece of the oldest and most secure blockchain in the world: Bitcoin.

Many developers are starting to build applications for the Bitcoin blockchain.

So owning a little bitcoin gives you a stake in the growth of this transformative technology.

P.S. If you’re still unsure about buying bitcoin, don’t worry. Most of my readers still can’t tell bitcoin from a gigabyte. But that didn’t stop them from making 22.9%, 195.7%, and 230.8% profits in 90 days from the fastest-growing cryptocurrency plays in America. And over the next 60 days, I think your profits could be even bigger.

Over the past five years, the S&P 500 has risen about 90%. But it’s not because companies are making more money…

Stocks are up because of “multiple expansion.” This happens when investors are willing to pay more for a company’s profits. The price-to-earnings (P/E) ratio is a common way to value stocks. And as you can see in the chart above, the P/E ratio has risen right along with the S&P 500.

This is a big deal because high P/E ratios usually predict lower future returns. It’s now more important than ever to select your investments carefully.

Bitcoin continues to ramp up its mass adoption point (MAP). As we told you above, that’s the point in which a technology takes off.

Recently, a San Francisco company called Shift Payments partnered with Coinbase to allow account holders to connect their credit cards directly to their bitcoin wallets. (A digital wallet is where you store your bitcoin.)

Most people would have stopped at that big news. But PBL editor and resident crypto expert Teeka “Big T” Tiwari dug deeper… And here’s his biggest takeaway: The number of people using bitcoin wallets jumped from 1 million to 5 million in just one year.

In today’s must-see 3-Minute Market Minder (transcript included), Teeka explains why this growth is “unreal.” He also reveals his new buy-up-to price for bitcoin. So make sure to tune in…

From Bud J.: Hello, Nick. Thanks for running the small-cap analysis. I agree that the return differential between small- and large-cap companies isn’t enough to change the original methodology for the Elite 25.  Additionally, for increased safety and decreased volatility, sticking with the big boys will allow long-term investors to sleep better at night. Great job.

Running Out of Money: We’ve been warning that public pensions are in a crisis. Now a federal agency created to “guarantee” pensions is in hot water, too. The Pension Benefit Guaranty Corporation (PBGC) was set up to back pensions of private corporations. But it’s now on the verge of bankruptcy. PBGC only has about a decade’s worth of cash in its coffers, according to one union rep. If you’re in a pension plan, now’s the time to be prepared. You can start by reading our special report on America’s pension crisis (PBL subscribers can access it right here).

Price Cut Signals MAP Cycle in Overdrive: Regular Daily readers are probably familiar by now with the mass adoption point (MAP). As we’ve said in the past, when the MAP cycle for a new technology kicks in, share prices soar. We’re seeing that in the virtual reality space. Most recently, Facebook announced it’s cutting $200 from the total price of its Oculus headset. The goal is to expand Oculus’ base of video game players. The company believes the lower entry price will attract consumers to virtual reality for personal computers at a faster pace. Virtual reality is set to take off… We alerted you to this trend last month.

Three Ways the Euro Could Break Up: Another trend we’ve been following is the rise of economic populism across the globe. We’ve called it “peak globalization.” We’re seeing this trend sweep across the European Union (EU). A surging nationalist presidential candidate in France, turmoil in the Italian banking sector, and the potential for Greece to go bankrupt could be the next three flashpoints for the euro. Check out this eye-opening infographic to see how this trifecta could lead to the unraveling of the world’s largest economy.

Inspired by this, a guy named Joe recently took a camera crew with him out on the streets of a major U.S. city to conduct his own similar, CRAZY social experiment.

The folks at Agora find it AMAZING. You’ll have to see it with your own eyes… 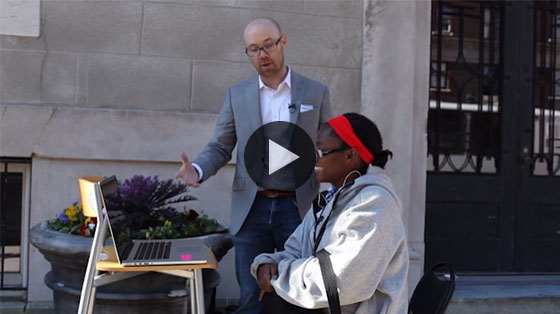