Nick’s Note: While many in the mainstream media are predicting the demise of bitcoin, actual adoption of the world’s largest cryptocurrency is on the rise. Despite plunging prices, the number of bitcoin transactions is still increasing.

You won’t see these types of headlines in the news. But those are the storylines my colleague Greg Wilson is uncovering. Regular readers know Greg is the chief analyst for world-renowned cryptocurrency expert Teeka Tiwari.

Greg is knee-deep in the crypto markets. And he’s seeing rapid innovation and adoption in the space—which is setting up a massive rally in 2019…

The entire cryptocurrency market cap is about $125 billion.

Or think about it this way…

Jeff Bezos, Bill Gates, and Warren Buffett are the three richest businessmen in the world. Combined, they’re worth more than bitcoin. And at over $130 billion, Bezos alone is worth more than the entire crypto market.

Looking at the grand scheme of things, the crypto market is just 0.3% of the world’s “narrow” money supply. That includes all physical money (such as coins and currency), demand deposits, and other liquid assets held by central banks.

If you believe cryptocurrencies will be part of our future, the upside is massive. And today, I’ll show you why you need to position yourself before the next rally.

Yes, the crypto market is down. But we’re continuing to see increased innovation and adoption in the space.

We can use bitcoin (BTC) as an example.

Take the Lightning Network. It’s a program designed to make bitcoin transactions faster and cheaper. And that’s helping to solve two of its main problems: scalability and speed.

Right now, the bitcoin network can handle about five to seven transactions per second. Confirmation takes 10 minutes or longer and can cost between five and 20 cents.

But with the Lightning Network, bitcoin will be able to do millions to billions of transactions per second. They’ll be instant and cost just fractions of a penny.

These are exponential improvements. Speed will improve—and costs will drop—by over 99%. And scalability improves by orders of magnitude.

Now, the Lightning Network isn’t something that has an official launch date. Rather, it’s an ongoing project that developers work on every day.

As for adoption, a University of Cambridge study last month found that the number of crypto users doubled last year. That’s impressive, considering the price decline during the year.

Keep in mind that the number of bitcoin users—now 35 million—represents less than 0.5% of the world’s population. If just 5% of the world adopted bitcoin, that would be a nearly 10-fold increase… and the price would follow.

So don’t focus too much on the recent price decline. As you can see in the chart below, bitcoin transactions are continuing to climb despite that: 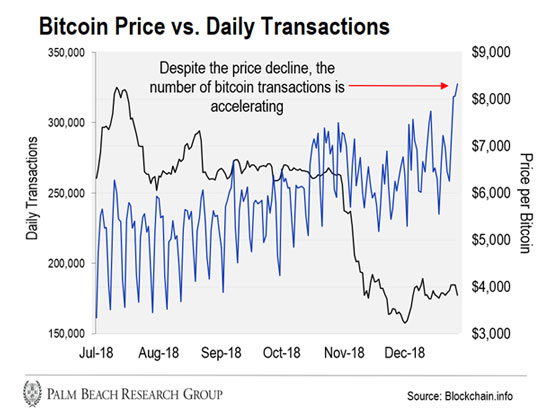 Eventually, the price will follow the transaction volume. And any number of catalysts could spark the rally.

Catalysts on the Horizon

Bakkt was scheduled to launch on January 24, but that’s been delayed due to the government shutdown. (Bakkt is awaiting regulatory approval from the Commodity Futures Trading Commission, which is affected by the shutdown.)

The delay has nothing to do with the crypto market. Bakkt, like many companies, is just dealing with political disruption.

That’s a smart group of backers. They wouldn’t invest unless they thought it was a great opportunity.

Second, there’s the VanEck/SolidX bitcoin exchange-traded fund (ETF). It’s awaiting approval from the Securities and Exchange Commission (SEC). And the deadline for a decision is February 27.

Even if it’s not approved, others are trying, too. Fund provider Bitwise just filed with the SEC to list a bitcoin ETF on NYSE Arca, which trades both equities and options.

And third, don’t forget that cryptocurrency is international. There’s plenty of developments going on around the world…

The Time to Buy Is Now

As I showed you today, the cryptocurrency world is still tiny. But even in the midst of a crypto bear market, developers are continuing to innovate… and adoption is continuing to grow.

On top of that, traditional financial firms are building infrastructure that will attract millions of new investors to the crypto space. Once it’s in place, any of these catalysts could kickstart the next rally.

The upside is massive… So use the current crypto bear market to start a stake today. I’d start with bitcoin.

And remember, crypto is volatile. You just need to bet a small amount for the potential of life-changing gains.

P.S. As I mentioned, the launch of regulated crypto products and exchanges will open the floodgates of millions of investors into the crypto space—and boost the prices of cryptocurrencies in 2019. But what most people don’t know is that there’s another way to make money from cryptos…

You see, some crypto projects pay “dividends.” No matter what the market does, you can generate crypto income from them. Plus, as the value of these crypto projects increases, so do their payouts.

Palm Beach Trader editor Jason Bodner spent nearly two decades on Wall Street at firms such as Cantor Fitzgerald. During his time as a trader there, he learned how to detect where millionaires are putting their money.

Using those secrets, he created a private, $250,000 database that can flag when big money is flowing into the market at least 24 hours to 10 day in advance. And he’s used this system to find multiple triple-digit winners.

You can learn all about Jason’s “cheat sheet” right here… 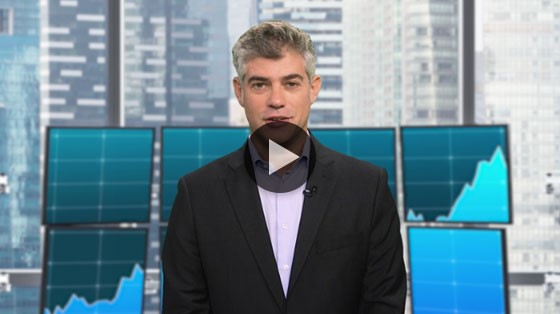