On Wednesday, the Federal Reserve (the U.S. central bank) released its latest public statement about the condition of the U.S. and global economies.

The Fed’s official outlook was the strongest it’s been in recent memory. It stated, “Near-term risks to the economic outlook have diminished.” For many readers, that implies the Fed plans to raise interest rates at its next meeting in September.

But in response to the most positive Fed outlook in over a year, the stock market ended… almost unchanged.

Bond yields came down. Gold increased. The U.S. dollar weakened. All the things that shouldn’t happen after news of a rising interest rate environment… did.

The Fed is losing credibility. People are starting to believe it’s losing control of the economy. And the implications are enormous…

It’s all about manipulation

Ever since the 2008-2009 financial crisis, central banks around the world have tried almost every “tool” at their disposal to stimulate the economy:

Nothing has achieved their desired “wealth effect.”

Remember, the economy our central banker “money mandarins” have created is debt based. It can only grow through lending. And lending can only occur when individual and corporate balance sheets show a favorable debt-to-income ratio.

The last eight years’ extraordinary monetary stimulus has had one goal: to manipulate the numbers on individual and corporate balance sheets. They want to force a more favorable lending setup.

Think of it this way…

Keep in mind… the actual asset—your home—is exactly the same in each case. No material changes occurred. It’s the numbers on your balance sheet that have changed, not your real-world situation.

Central bankers think it’s their job to manipulate the numbers on everyone’s balance sheets. They want to push them all into favorable lending setups… and thereby create more “growth” for the economy.

As we noted, none of the extraordinary measures of the last eight years have achieved the bankers’ desired result. And that leaves central banks with one final “bazooka” in their armory: “helicopter money.”

Imagine taking pallets of hundred-dollar bills up into the sky and shaking them out over every city in America. That’s the basic idea behind helicopter money. It’s a direct injection of freshly printed cash into an economy.

In practice, helicopter money would enter the economy through central bank-financed stimuli (like massive infrastructure-improvement projects). The bank could even finance a direct payout to citizens via tax “rebates.”

But let’s be clear: This is a 100% experimental monetary policy. And its ultimate end will be disastrous…

Zero Hedge reports Richard Koo—chief economist at the Nomura Research Institute—is waving the caution flag on helicopter money, too. (Nomura is a global consulting firm based in Japan. It employs more than 9,000 people worldwide.)

And if you think central banks can just shrink all those excess money reserves without consequences, think again. Here’s Koo again:

By “nightmare,” Koo means bond yields ripping higher from the central banks’ massive sell-off programs… a corresponding inflationary explosion from high and rising interest rates… and bankruptcies for individuals, corporations, and governments that can no longer finance their debts at rock-bottom rates.

But if the banks don’t pare down their assets… the global economy will enter a disastrous hyperinflationary environment. Talk about a no-win situation…

The reality at hand

Longtime Palm Beach subscribers know we’re not raving alarmists. But we don’t bury our heads in the sand either. We assess the world around us… then use our insights to make the safest plays possible in these treacherous economic times.

We believe—now more than ever—that return of assets is more important than return on assets. That’s why we continue to “bang the drum” on the fundamental importance of risk management and intelligent asset allocation.

Like it or not, central banks have placed us all on a runaway train. For the first time in human history, over $13 trillion in government debt trades at negative yields worldwide. And this number is growing… by several trillion dollars per month. 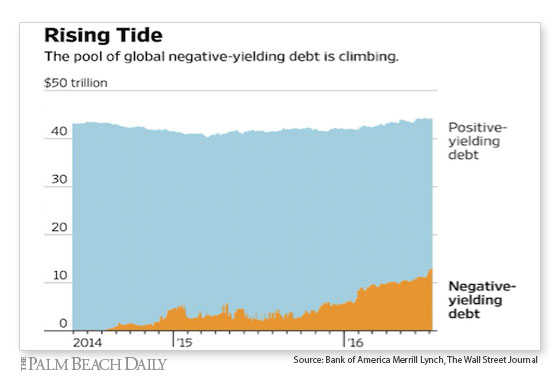 No one knows for sure what pitfalls lie ahead. Our only choice is to be ready for anything. And PBRG has taken extraordinary steps to help you do just that…

Over the first half of 2016, we began a process to streamline our investment research services.

We realized we’d spread ourselves too thin… and we weren’t serving you well enough in today’s chaotic investment environment.

Yes, several of our services provided the surest, safest ways to build wealth inside and outside of the stock and bond markets.

But we realize they often require more time and resources than many of our subscribers have.

So over the remaining months of 2016, we’ll roll out some extraordinary new services. We’ll expose our readers to content, strategies, and investment networks they’ve never had access to before, including:

Time to level the playing field

The brutal reality of our modern age is a society split into two tiers. It’s powered by a monetary system that benefits the richest (through asset price inflation) and poorest (through transfer payments)… at the expense of the middle class.

In 2015, the middle class shrank to less than 50% of the U.S. population… and this trend shows no signs of reversing. 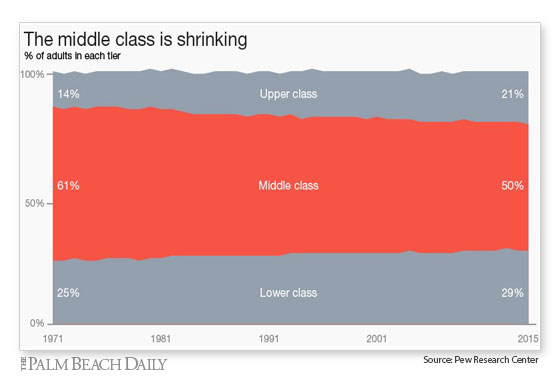 Our approach to counteract this is simple: level the playing field.

In our research we often find extraordinary opportunities available only to the hyper-connected elite. We plan to share them with you like we never have before—to the fullest extent we can under the law.

Help us help you

But first, Palm Beach editors Tom Dyson and Teeka Tiwari need to know your No. 1 concerns about today’s investment landscape. No topic is off limits.

They’ll discuss the issues you raise in a special event next week. It’s exclusive to PBRG subscribers and 100% free. No sales pitches.

Tom and Teeka want to know what you need help with most. Then they’ll share some insights from their research and networking inside business, technology, banking, and the government.

And they’ll begin to reveal some of our new approaches to helping you emerge safe and profitable from the dangerous times we find ourselves in today.

So please submit your comments and issues to Tom and Teeka right here. Then stay tuned for more information next week…