Nick’s Note: At the Daily, we’re always on the hunt for ideas to help you build long-term wealth and achieve a dignified retirement. But that doesn’t mean we don’t look for low-risk ways to make quick profits, too.

So today, we’re handing the reins over to our stealth-income generator William Mikula, chief analyst of Teeka Tiwari’s Alpha Edge. Since 2012, he’s closed 294 out of 302 trades for a profit. That’s a 97.4% win rate.

And William believes he’s found another short-term play to add to his winning track record. Read on below to find out what it is…

As a shareholder, there’s nothing better than a good, old-fashioned bidding war.

As bidders one-up each other, shares of the company you own rise higher. You can just sit back and reap the benefits without lifting a finger.

And today, I’ll show you how smart investors can profit from mergers—and reveal a recent mega-deal that’ll ignite a bidding war for U.S. energy companies.

But first, let me show you how my strategy works…

How to Quickly Skim Profits

For decades, Wall Street has used buyout announcements to rake in billions in profits. It’s one of its favorite low-risk, high-reward setups.

And it’s also one of the three strategies Teeka and I use in Alpha Edge.

There are two types of trades we execute under this approach: Skim Trades and Takeover Targets…

With these trades, we buy the targeted company’s stock after a deal is announced—then capture the difference between the market price and the buyout price.

But we only execute trades meeting our strict criteria. (About 4,000 companies trade on the major U.S. exchanges. Of these, only about 40 pass our standards. That’s how selective we are.)

So by “skimming” these quick gains from the market, we can grow our capital throughout the year—without tying it up long-term.

And that brings me to today’s opportunity…

The Energy Sector Heats Up

Located in the West Texas Permian Basin, Anadarko is a premier operator in the crown jewel of America’s oil empire.

Plus, according to industry sources, that production is set to double in the coming years.

So it’s no surprise that major oil companies are looking for best-in-breed operators to gobble up—and cash in on this Permian boom.

And Anadarko’s a perfect fit.

But the story doesn’t end there. In fact, it’s only just beginning…

On the heels of the announcement, rival energy giant Occidental announced its own private bid for Anadarko.

Anadarko approved this higher bid on Monday. Now, Chevron has until midnight tonight to decide whether to raise its bid. And by then, another energy major could even enter this bidding war, too.

The bottom line: Anadarko shareholders are making a killing. They’re up 61% since Chevron’s initial bid went public on April 12… 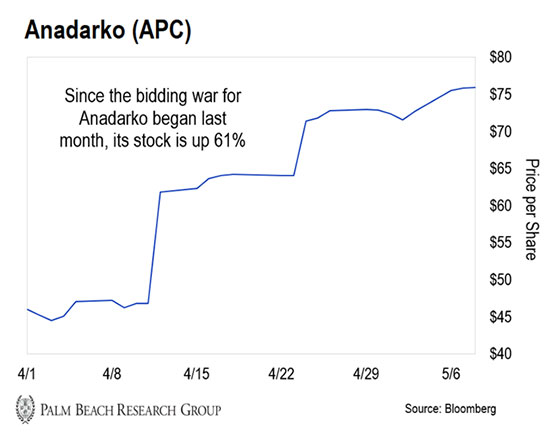 As Easy As Cashing a Check

This is easy money for Anadarko shareholders; they can just continue holding until a deal is consummated. Their brokers will automatically sell their shares and deposit the cash once the deal closes.

Now, if you’re not a shareholder, consider buying Anadarko today. Although the major early gains have occurred, you could still skim fast profits as the bidding war plays out.

And there’s even better news…

The merger trend in the energy sector is just getting started. This buyout will spur many more deals in the coming months.

In fact, Teeka and I have pinpointed three other best-in-breed energy firms operating in the Permian. One is likely to be the next buyout announcement. And readers of Alpha Edge will cash in.

Alpha Edge subscribers can get our latest updates right here.

If you’re not an Alpha Edge subscriber, you can learn how to sign up right here. You’ll also learn about a new way to collect cash—even if the market crashes.

Year-to-date, bitcoin is the best-performing asset class of 2019. It’s up over 50% since January—outpacing the S&P 500, U.S. crude oil, and even corporate and government bonds.

From Erick P.: Teeka, thanks for talking about bitcoin. Some people aren’t in prosperity mode—they’re in survival mode. Some of the rich don’t realize what it feels like to try to get ahead in today’s America.

One of the reasons why millennials are into bitcoin is that they don’t have a lot of money. How’s the average millennial supposed to get ahead in today’s America? As a reminder, bitcoin was designed as a response to the 2008 financial crisis, when the world almost fell apart.

From John L.: Teeka, you’re always insightful and instructive. I appreciate all of your efforts.

Teeka has a major crypto event coming up in the coming weeks. In preparation, we’re taking your questions for him right here…

The feds want to place strange-looking devices in every community in America… But they’re not meant to spy on you.

Instead, according to a 92-page Department of Homeland Security memo, they’re not only meant to save your life—but also $150 billion a year for the U.S., too.

This spells opportunity for investors. And if you want all the details on the birth of this new mega-industry, just click right here… 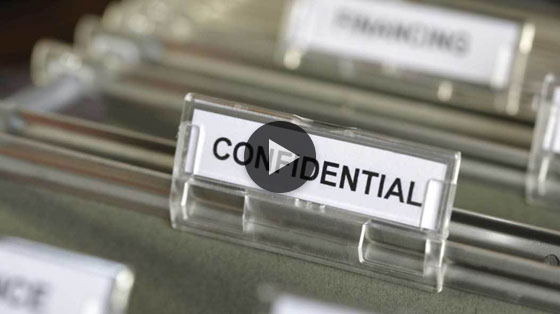