You see the red line in the chart below?

It shows the cream of the crop. The best investments money can buy… 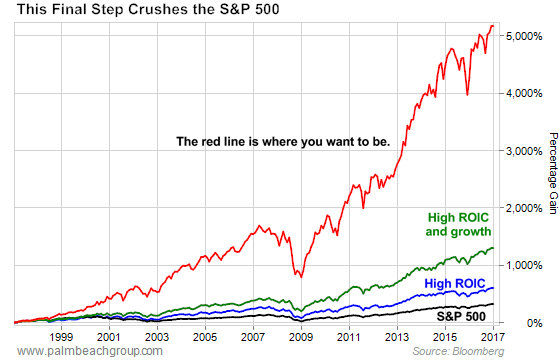 If you want to ride that red line all the way to the top, read on…

Last week, I told you about my three-step method for picking elite companies.

The first step is to find companies with a high return on invested capital (ROIC). Just doing that would put you on the blue line in the chart above.

The second step is to find companies with a high ROIC and high growth. Just doing that would put you on the green line in the chart above.

Today, we’ll conclude our series on the three steps to picking elite companies with the third and final step in our method: cheap valuations.

There are 4,200 publicly listed U.S. companies with market caps over $200 million.

Last Thursday, we narrowed that down to 281 by looking for companies with an average ROIC of over 20% per year for the last five years.

We put the 10 companies with the highest ROICs on a list.

Then on Friday, we winnowed that list down by choosing companies showing long-term growth in three categories: revenue, free cash flow, and profit margins.

Of the 10 companies we selected, four met that criteria.

From that handful, we were able to select a potential superstar performer using our third criteria…

How to Find an Elite Company on the Cheap

We look at three ratios to determine if an elite company candidate is cheap:

We applied those three metrics to our sample shortlist from last week. Only one company passed the final test: Natural Health Trends (highlighted in green below).

Natural Health Trends is the only company on our list of the 10 companies with the highest ROICs to pass our three-step test.

Based on this test, we believe it will be a good investment going forward.

For our backtest, we bought the 25 cheapest elite companies every month starting in 1997 to see how they would perform using our strategy.

When a company became too expensive, we sold it and bought a replacement. 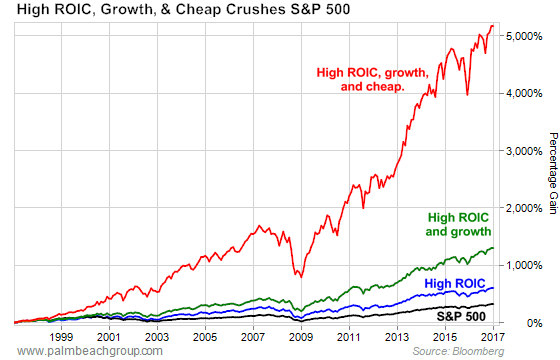 Now, most people won’t be able to duplicate the returns in the chart above on their own…

You’re just not going to get the same entry and exit points.

But you can use our system to create a shortlist. From there, you can spend time researching each company and make your own decision.

If you apply our three-step test, we believe you’ll have a leg up on most investors. However, we understand you probably can’t replicate this screen on your own…

Here at the office, we put in hundreds of man-hours and spend thousands of dollars on research to find companies that can follow the red line.

So if there’s enough interest, we’ll start keeping a periodic shortlist of companies with elite-status potential in the Daily.

If you’d like us to run a periodic shortlist, let us know right here…

If you want to start investing in companies like those on our list right away, you should consider PBRG friend Chris Mayer’s Focus service.

This service is based on Chris’ proprietary research into the highest-returning stocks between 1962 and 2014. No one else in the world has access to it.

In Focus, Chris looks for similar qualities that we do: small companies that enjoy high returns on their assets… reinvest the profits… and earn those high returns again and again. You can learn more right here…

In September 2016, OPEC announced a production cut. Oil shot up 5% on the news.

Seeing an opportunity, U.S. producers started pumping more. They increased production to more than 500,000 barrels per day to fill the supply gap left by OPEC (see chart below). 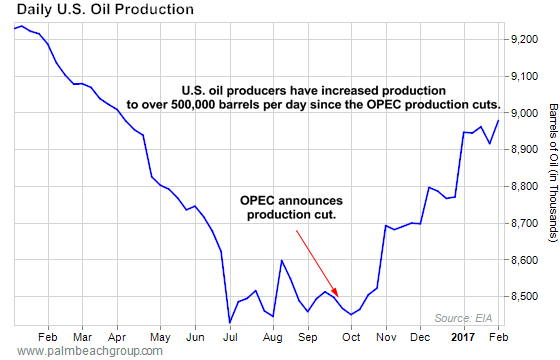 OPEC used to be able to control the price of oil. But now, U.S. companies can expand production to meet demand.

This makes it unlikely that oil prices will rise much higher.

More Upside for Gold: Gold could have at least 5% more upside this year from the leap it already notched in January. The precious metal is being driven by higher inflation expectations and safe-haven demand due to uncertainty around President Trump’s foreign diplomacy. Analysts in the survey are predicting gold will trade in an average range of $1,101–$1,379 this year. One survey of analysts projects gold to trade up to $1,379 this year.

Five Signs the Market Is Uneasy: Uncertainty is at record highs, and that’s causing jitters in the market. Although the VIX Index (commonly referred to as the “fear gauge”) is down, another fear measure is at record highs. It’s called the Economic Policy Uncertainty Index, and it’s peaking. It’s among five signs suggesting all is not well.

A Government for Old People: Many retirees think they already “paid for” their benefits. Maybe they did. But the feds spent the money on other crony-zombie projects. So the only way they can make good on their promises is to squeeze younger citizens. And when that blood runs out, they have to borrow… which means squeezing the money out of an even younger group, some of whom haven’t even been born yet. Old people win. Young people lose.

Last month, PBL editor Teeka “Big T” Tiwari told readers not to worry about gold’s sell-off because prices would come roaring back. And that’s happened since. Gold is back at $1,235, breaking above its 100-day moving average.

If it continues from there, gold could make an assault on $1,275. In today’s must-see 3-Minute Market Minder (transcript included), Big T explains why you should ignore the noise in the mainstream press and focus on the big picture.

(After you watch Big T’s video, check out this next presentation. It’s about a small mining company that’s come across a major gold deposit. When this news reaches the mainstream by April 2017, share prices could go parabolic…)