They call him the “Grave Dancer”…

Sam Zell was born in Chicago in 1941, the son of Jewish immigrants who fled Poland just before the Nazis invaded in 1939. And when he was 11, his family moved to the suburb of Highland Park.

While attending Hebrew school in Chicago one day, the young Zell discovered Playboy magazines for sale at a train station newsstand. He’d buy them for 50 cents each, then sell them to his friends in the suburbs for $3 apiece. That’s a 500% return.

According to reports, he called the experience his “first lesson in supply and demand.”

Over the years, he made a fortune specializing in flipping distressed real estate. He began his career in the 1970s by buying nearly dead properties and resurrecting them for millions in profits.

In a 1975 article published in the New York University Review, Zell wrote, “I am really a gravedancer.” He dubbed himself the Grave Dancer thereafter, and the name stuck ever since.

During his long and successful career, Zell has founded several companies, including EQ Office—one of the nation’s first real estate investment trusts (REITs). The company specializes in buying commercial properties at fire-sale prices.

Zell built EQ Office from nothing and sold it to Blackstone Group for $39 billion in 2007—at the height of the real estate bubble. That opportunistic deal cemented his legacy as the Grave Dancer.

So when the Grave Dancer spots an asset left for dead, it’s usually a wise decision to join the party. And today, I’ll tell you what he’s eyeing now…

Buying a Hated and Cheap Asset

“For the first time in my life, I bought gold because it is a good hedge.”

That’s what Zell said during a January 17 interview on Bloomberg TV.

Now, you may be wondering why a real estate mogul is dipping his toes into the gold market for the first time.

It all goes back to that early lesson he learned selling Playboy magazines to his friends—supply and demand. Here’s Zell from the same interview:

The amount of capital being put into new gold mines is almost nonexistent. All of the money is being used to buy up rivals. Go back to supply and demand… Supply is shrinking, and that’s going to have a positive impact on the price.

That sounds eerily like what I wrote last week about gold:

When prices are low, miners aren’t making money. So they stop exploring new mines. The lack of supply creates scarcity. But scarcity eventually pushes prices back up. That’s why miners are merging.

And we’re seeing this manifest in production numbers.

A recent study by Bloomberg Intelligence found that combined gold reserves of big producers fell over 40% in 2017 from their peak in 2012.

And like the distressed properties Zell scooped up in the past, he’s getting ready to dance on the graves of anyone willing to sell him gold at these fire-sale prices. 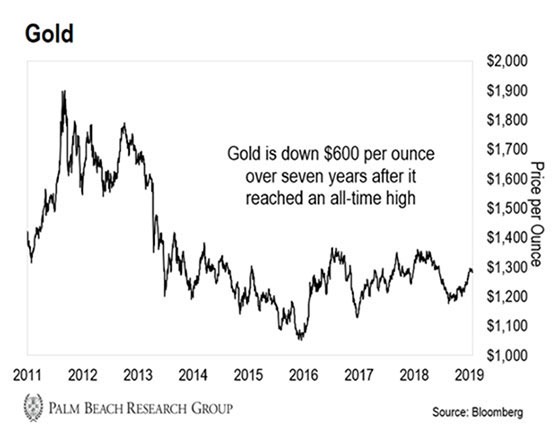 That’s why I think Sam Zell came to the same conclusion I did: Eventually, the shrinking gold supply will create scarcity. That scarcity will lead to higher prices. And once gold catches a bid, it could be off to the races.

Regular readers know that we consider gold a vital chaos hedge. We recommend you allocate 5–10% of your portfolio to the metal to smooth out volatility. That’s because when stock prices go down, gold prices usually go up.

Just look at what happened in the fourth quarter of 2018. The markets fell nearly 20% as gold rose 8%. While stock investors were panic-selling, gold investors raked in profits.

We don’t know what’s going to happen in the world—which is why we want to own some gold. It’s a hedge against the unknown.

But when the fundamentals behind the yellow metal are this solid, I get even more excited.

I’m predicting we’ll see a supply crunch—probably right at the time when everyone is going to want more gold.

Whether it’s a market correction or a dollar crisis, there will soon come a time when people want gold. And once demand ramps up, we could see gold rise over 50% and reach new all-time highs.

As I wrote last week, this trend could take a couple years to play out. That’s why you want to get positioned today—while gold is still hated and cheap.

One way to play this trend is to buy physical gold. But if you’d prefer to hold gold in your brokerage account, consider the Sprott Physical Gold Trust (PHYS) or the SPDR Gold Trust (GLD).

Both funds are tied to the price of gold and backed by gold secured in vaults around the world.

P.S. I’m seeing a disturbing economic trend infiltrating the thinking of politicians in Washington. If you haven’t heard about it yet, you will soon. And there’s a lot of misinformation in the media about it. Stay tuned for more to come.

As I mentioned above, a shrinking gold supply will coincide with a rise in demand—leading gold prices to skyrocket. But owning physical gold won’t be the only way to profit…

Miners will need to expand their reserves—and this technology could single-handedly revolutionize their exploration… which will unleash a massive wave of new wealth-creating discoveries, too.

For all the details about this tool that could send mining stocks soaring, click here… 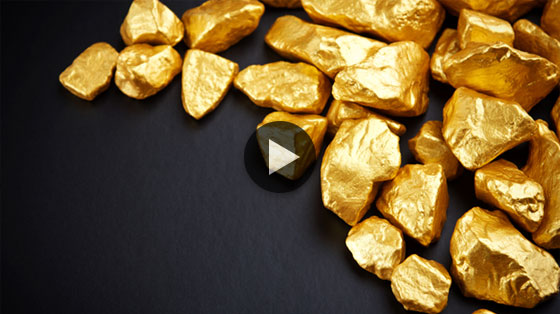